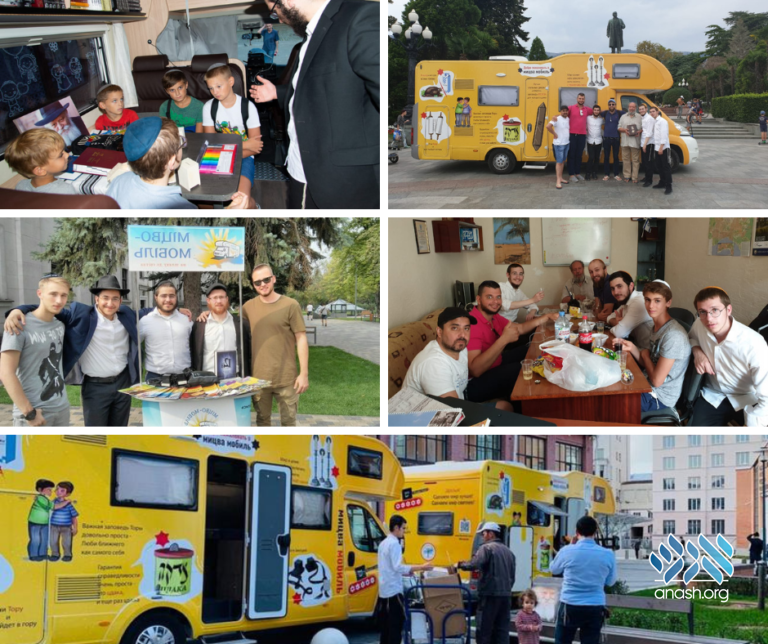 Summer in Russia sees Chabad Mitzvah Tanks visiting the most distant communities throughout the country, thanks to a unique project backed by the Federation of Jewish Communities.

The young Rabbis spend their time meeting Jews, learning and dancing with them, putting tefillin on the men and encouraging the women to light Shabbat candles.

They also sell them Judaica objects such as mezuzah, tefillin, tallit and more, as well as Jewish books at a highly subsidized price. In Ukraine, where the financial situation is so dire that most Jews cannot afford to pay for Jewish items, books and other Judaica are distributed free. Thanks to the FJC and the Fellowship Foundation, they are also able to distribute food packages to families living in truly difficult circumstances.

In Russia, Rabbi Yehuda Davidov has spearheaded a mezuzah campaign that allows a family to buy a mezuzah for a mere $2.

The tanks travel more than 1500 KM throughout their two-week campaign, often driving between eight to nine hours to visit a distant community. The young Rabbis eat canned kosher food and whatever supplies they have brought along with them. They are young, charismatic, have a good grasp of the Russian language and are motivated by the intrinsic desire to touch as many Jewish souls as possible and to leave a lasting impression that will ultimately bring the Jews they meet closer to their roots.

In Russia, the project has been operating for eight years under the supervision and support of the Chief Rabbi Berel Lazar. In Ukraine, the project began three years ago and is an extraordinary success.