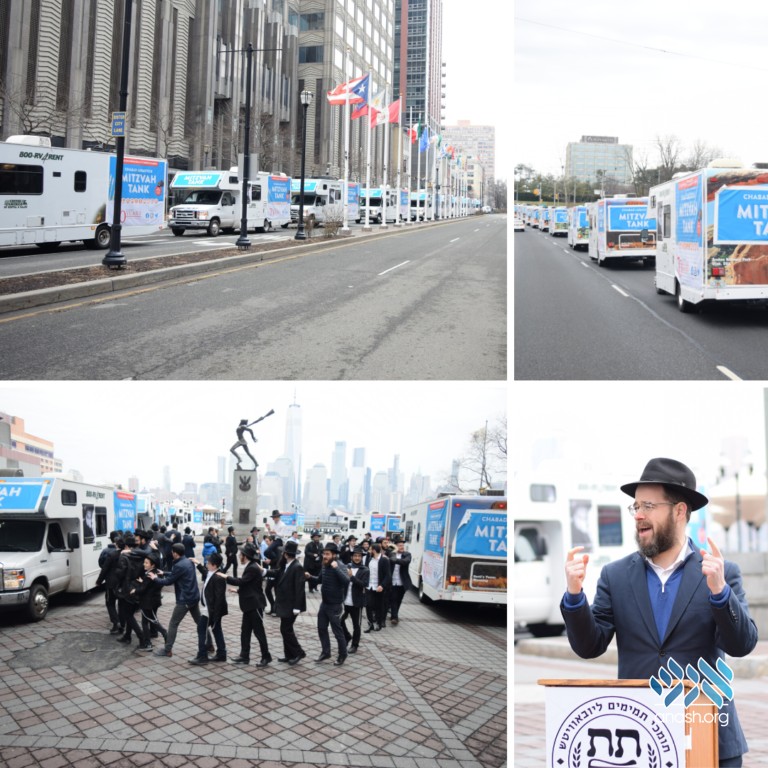 A Mitzvah Tank Parade in honor of the 70th anniversary of the Rebbe’s leadership passing through major New Jersey cities including Morristown, Livingston, West Orange, Newark and finishing in Jersey City.

As Yud Shevat was about to begin Mitzvah Tanks took to the roads of NJ, passing through major cities including Morristown, Livingston, West Orange, Newark, and finishing in Jersey City.

As they arrived In Exchange Place, the center of Jersey City, the Bochurim from the Yeshiva, drivers and children from the Cheder in Morristown all broke into a spontaneous dance, in a true Shivim Shana spirit, attracting hundreds of onlookers, many of them came over to put on Teffilin and inquire about the event.

Afterward, the crowd was addressed by Rabbi Moshe Shapiro, Shliach to Hoboken and Jersey City, about the significance of the day and what we can take from this day to impact our day to day life.

From there the Tanks went to Montclair, Hoboken, West Orange, Florham Park, South Orange, Westfield, Milburn, Summit, Morristown, Newark and Jersey City, where the Tanks opened their doors welcoming Yidden to do a Mitzvah.

As the tanks arrived at their locations, the weather couldn’t have gotten better, and enabled hundreds of Jews to hop on a Mitzvah Tank!

“It was a bigger Kiddush Lubavitch than we could’ve imagined,” said one of the organizers. The Parade was covered by major news stations and newspapers.

Beautiful signs adorned the Mitzvah Tanks which were equipped with Tefillin, Shabbos candles and specially made pamphlets about the Rebbe and 70 years of his leadership.

The Bochurim and Cheder children returned to Morristown inspired and invigorated to continue doing the Rebbe’s Mivtzoim giving the Rebbe much Nachas.