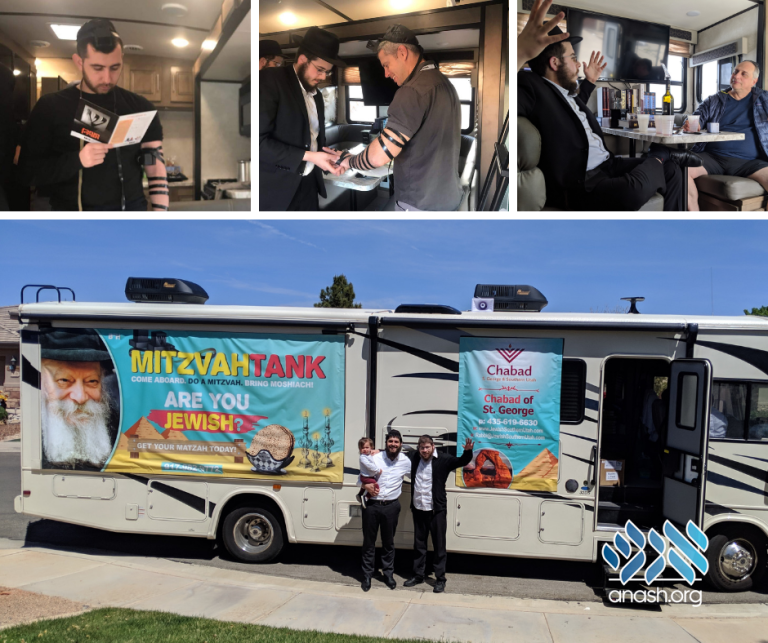 In the weeks before Pesach, a large Mitzvah Tank could be seen roving the streets of many small towns in south-west Utah.

Coordinated by Rabbi Mendy Cohen of Chabad of S. George, and with the great assistance of a dedicated group of bochurim from Crown Heights, the Mitzvah Tank reached tens of Jews and provided them with a taste of genuine Yiddishkeit. Pesach items were distributed as well, enabling those in cities without a permanent Chabad presence to celebrate Pesach.

Making its way through Cedar City, and the famous Zion National Park area, the bochurim met with Jews that had never had contact with Chabad.

The Mitzvah Tank was welcomed warmly by all, and even helped a resident 39-year-old have a Bar Mitzva and put on Tefillin for the very first time!

Shabbos was spent in the home of a Cedar City resident, where exactly 10 Jews showed up, and a minyan was held, complete with Krias Hatorah and a kiddush afterward.

Bochurim that participated in the Mivtzoim efforts said the experience was like nothing they had ever done before, as they saw first-hand how touched the people they had encountered had been by their visits.