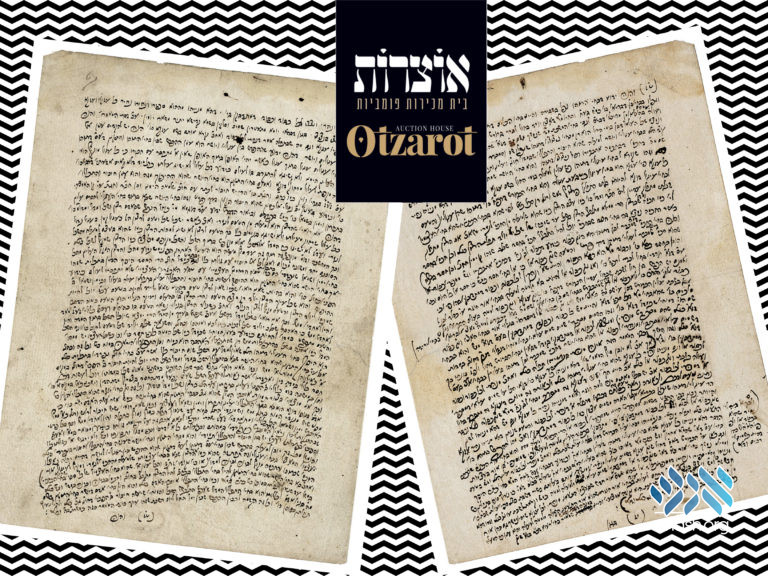 The Otzarot Auction House will be selling a page of the Mitteler Rebbe’s handwritten Chassidus, with a starting price of $40,000.

Until recent years, most of Chabad Chassidus was only accessible through the handwritten originals. Each Rebbe, excluding the Alter Rebbe and our Rebbe, wrote down their ma’amarim and keep bookshelves or even entire rooms full of these cherished volumes.

The crown jewel of the Rebbeim’s collections was the precious kisvei yad. Even at the most trying of times, the kisvei yad were always at their side and closely guarded. Nonetheless, throughout the years many priceless kisvei yad went missing, especially during World War II.

Now, another folio of previously-unknown ksav yad has been discovered, only to be auctioned off to the highest bidder. The page is from the original of Sefer Pirush Hamilos, a sefer authored by the Mitteler Rebbe towards the end of his life and first published in 1867.

It is unknown where this page originates from, but its rightful home is undoubtedly the Rebbe’s library in New York.

The item description in the catalog:

The revered Rabbi Dov Ber Schneerson (1774-1828), the son of Rabbi Shneur Zalman of Liady, author of the Tanya and founder of Chabad Chasidism. Rabbi Dov Ber took over from his father after the latter’s death in 1813, and was the second Admo‫״‬r in the dynasty. He was named after the Maggid of Mezeritch, the rabbi and mentor of the author of the Tanya. Rabbi Dov Ber was known for his phenomenal memory and his father praised him, saying, “All your deeds are written in a book.‫ ״‬Rabbi Dov Ber had a weak constitution and to improve his health travelled to spa resort towns, where he met the great sages Rabbi Akiva Eiger and Rabbi Mordechai Benet and conversed with them on various subjects. In 1826 Rabbi Dov Ber was imprisoned following false testimony against him, but was released after a few months.

Rabbi Dov Ber worked hard to establish and clarify the Chasidic and Torah teachings of his father, and most of Rabbi Dov Ber’s writings concern his father’s works. This item is two pages, consisting of 83 lines that are part of a book composed in his later years, called Peirush Hamilot (also known as Mahadura Batra, first published in Warsaw, 1867), based on the commentary on prayer published by him, based on his father’s teachings (the Ari version of the order of the prayers for the entire year, Kapost, 1816). This composition explains the Psalms in the pesukei d’zimra preliminary verses in the morning service, and each psalm is divided into a few letters of the alphabet.

In 1993 Kehot Publications published a revised edition of this book, based on a comparison of the author’s manuscript and copyists’ manuscripts. The item before us consists of sections 15 and 16 that were not available to the editors of the 1993 edition! A few of their corrections that were based on a copyist’s manuscript can be seen in the body of this handwritten text. In addition, a section of this handwritten text that appears in parentheses is included in the printed editions without parentheses. Another section of the handwritten text appears as an annotation, and in the printed editions is included in the text in parentheses.