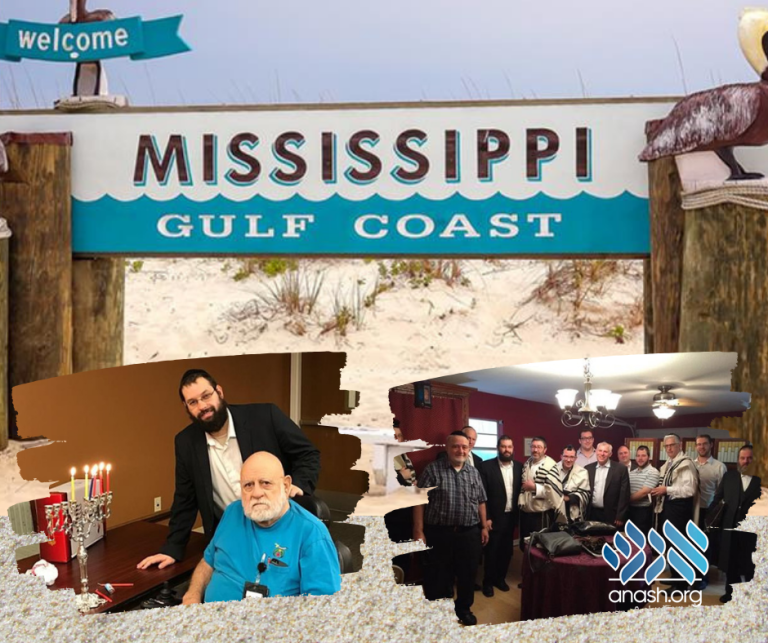 Rabbi Akiva Hall, a Mississippi native, has returned back to his hometown together with his wife, to help build the Jewish Community. In this interview, he shares some of the challenges and achievements that come along with this unique shlichus.

The Mississippi Gulf Coast features more than 60 miles of sandy beaches, easy-to-spot dolphins and just one rabbi, Akiva Hall, 28, who directs Chabad of South Mississippi with his wife, Hannah.

In this interview, he shares some of the challenges, achievements and issues that are unique to his role as the only rabbi between New Orleans to the west and Mobile, Ala., to the east.

Q: To start with, can you tell me a little about yourself and your family?

A: My wife and I have been here since late summer of 2014, serving the Jewish community in Gulfport, Biloxi and the other towns along the Mississippi Gulf Coast. I was actually raised in the area, and my grandparents still live here. My family had always been quite traditional and actively Jewish, and ensured that I received a Hebrew-school education. On a visit with relatives in Las Vegas when I was 11, my parents enrolled me in the Chabad-run Gan Israel day camp there, and I really took to it.

For many years afterwards, I received private tutoring from Rabbi Mendel Rivkin of Chabad of New Orleans. After I graduated from public high school, I transferred to YeshivaOhr Elchonon Chabad in Los Angeles for two years. After a year in Morristown, N.J., and another Chovevei Torah Lubavitch in Brooklyn, N.Y., I was ordained as a rabbi.

My wife is from Bakersfield, Calif., and her family, while they grew up very Jewishly active, increased their Jewish observance with the help of Rabbi Shmuli and Esther Schlanger. Eventually, they relocated to Los Angeles, so their girls—one of whom is now my wife—could attend Jewish schools.

After we married in 2012, we were blessed with the birth of our daughter, Leah, who is now in preschool at the New Orleans Slater Torah Academy, an hour-and-a-half drive from here.

Q: What’s the community like so far south? In what way is it different from other Jewish communities?

A: At its core, our community is the same as communities everywhere, just smaller. But there are differences.

Historically, most Jewish life in Mississippi was in the northern part of the state, where the cotton industry attracted many Jews in the late 19th century.

There are probably fewer than 300 Jews in the Mississippi Gulf Coast, where we focus our efforts, and almost none of them are from here. Some come because of jobs; others are attracted by the inexpensive, high-quality, slower-paced life. Quite a few Jews also come through the Keesler Air Force Base, which is nearby.

Before we came, there never was been a pulpit rabbi in town. There is a Conservative congregation, but it has never had a full-time rabbi. By the same token, there is no Federation, no Hadassah, no B’nai Brith or any other umbrella Jewish social organization, so people are somewhat scattered, and we have been working very hard to foster a sense of belonging and a feeling of community.

This is also a blessing for us because it means that we didn’t need to work to fit into an existing framework. We help define the framework.

When we came, we acquired a mailing list of all known Jewish residents. Thank G‑d, we were able to expand the list significantly, bringing more and more people into the circle of Jewish life.

Q: Can you describe some of the programs you and your wife do for the community?

A: One of our favorite activities is our Hebrew school. There are not many Jewish children here on the Gulf Coast, but we believe that almost all of them are enrolled in our Hebrew school, which we are very proud of.

Now in its third year, it has 12 students. They are learning; they enjoy Judaism and sharing their enthusiasm with their families and their friends.

We also have a full schedule of holiday programs, a large Seder on Passover, a Megillah reading and party on Purim, and a menorah-lighting on Chanukah. We don’t have a minyan on a weekly basis, but we have services for every holiday, followed by a very heimish Kiddush lunch.

Over the past year, we have shifted our focus somewhat. Instead of concentrating our efforts on the larger regular events, we have put a lot of effort and thought into smaller, more intimate activities.

We both teach regularly, but we are investing more into learning Torah one-on-one, small discussion groups where everyone has a voice, and creating meaningful moments at our Shabbos table every week.

Q: Do you have a Chabad House, or do you operate out of your home?

A: When we began, everything ran out of our home. Three years ago, we leased and renovated a beautiful space with classrooms, a social hall, prayer area and everything else our community needs.

Called Chabad Jewish Center, it really became a communal effort. People contributed towards the renovation, and they really took ownership of it. One person built the ark, another built the Torah-reading platform, and another made the bookshelves. People sponsor different portions of the operation, and that is really beautiful for us to see—how people are coalescing around this central point that unites us all.

Q: In what other ways do you serve the community?

A: We are well-connected with the local hospitals, and we get called whenever there is a Jewish person, local or visitor, who can use a visit or religious guidance. This year, we started a local chevra kadisha, a wonderful group of volunteers that provides burial preparations to Jews who pass away. We work out of a local funeral home and there has been a Jewish cemetery for decades, so everything works smoothly and honorably.

We also do a fair amount of kosher catering, providing meals for business visitors, vacationers, as well as for local simchas.

The area has become a magnet for business conventions and the Chabad center gladly hosts out-of-state Jewish visitors with prayer services, kosher food and other amenities.

Q: On that subject, have there been any Jewish weddings under your tenure?

A: Unfortunately, not yet. This is a mature community, with very few young Jewish people. But there are some couples that I am hopeful for, so perhaps ask a few years from now.

Q: What are your hopes for the future of Jewish life in Southern Mississippi?

A: I don’t expect Biloxi to become Brooklyn. One day, we may be at the stage of having a minyan every Shabbos, but that’s certainly not our focus. Instead, we look at each individual and try to help them take one step forward, on their pace, at their level.

We view the community as a series of concentric circles, at varying degrees of closeness to Judaism. We want to help every person come just a bit closer, moving to a closer orbit, in which Judaism is that much more central to their lives.

A: Thank you for the interview and for allowing people to learn about our Jewish community. I think it’s really amazing how each community can be so different in some ways, yet share the same warmth, closeness and sense of belonging to other communities and Jews all over the world!