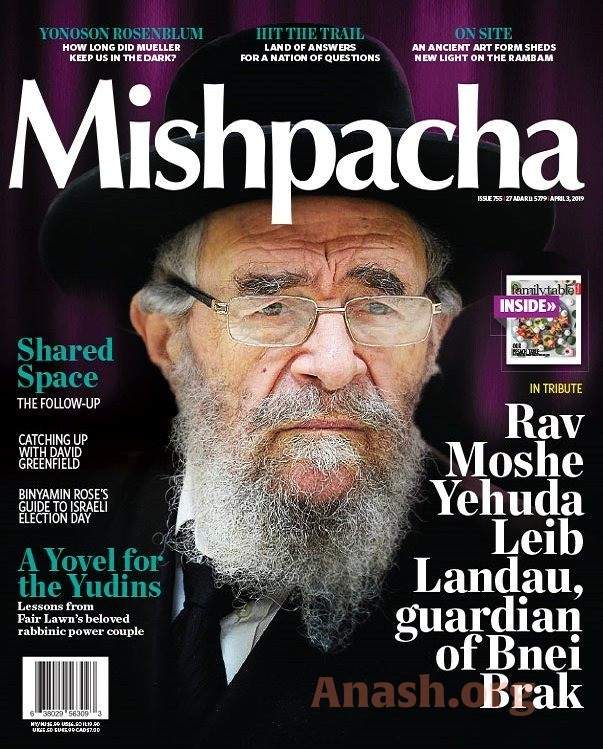 Mishpacha magazine ran a feature article on Harav Moshe Landa a”h, with interesting anecdotes from his life. Read it here.

It was Friday, the 12th of Tishrei this past year, a few hours before Shabbos. The lawyers representing the Bnei Brak municipality arrived at the Tel Aviv District Court for an urgent hearing regarding the demand of the Netivei Tachburah Ironit company to approve the continued digging of a tunnel on Shabbos for the Dan Region light rail. A day earlier, the court approved a municipality-issued injunction forbidding the work on Shabbos. But now, claimed the company’s representatives, “It’s pikuach nefesh.”

To the surprise of the municipal representatives, Rav Moshe Yehudah Leib Landau, the rav of Bnei Brak, also arrived at the court. His family related that despite being in a wheelchair and unable to walk, he insisted on participating in the hearing. And then he requested to speak. It’s possible that the machines would sustain some damage as a result of the work stopping, he told the court, but that was not pikuach nefesh. He added that the CEO of the company had even told him so, but now he was denying it. Rav Landau fixed him with a piercing gaze.

“You have no backbone,” the Rav told the CEO, and left the hearing, very upset.

Then he announced that he would participate in the next day’s mass tefillah rally — and he did, along the entire route, despite his limited mobility. It was one of Rav Landau’s final public appearances.

Throughout his life, he stood guard to ensure that Bnei Brak’s character would not be marred. The women’s clothing stores sold only modest attire. When the idea arose to build a mall in the heart of Bnei Brak, he fought against the spiritual danger to the city, encouraging then-mayor Rabbi Yissachar Frankenthal to stand firm in the face of pressure by the developers. (The plan was eventually buried.)

He made sure fast food places closed by 11 at night, and from 8 p.m. the tables were folded, except in restaurants with an on-site mashgiach. And he instructed all the matzah bakeries under his supervision to make sure that none of the workers had a nonkosher phone.

When Rav Landau was asked about his many stringencies, he would often reply that he was guarding the deposit given to him by his father, Rav Yaakov Landau ztz”l, who served as the city’s rav for 50 years until his passing in 1986. For the next 33 years, all of Rav Moshe Landau’s energies were devoted to protect the mission bequeathed to him.

Rav Landau was famous for his stringent hechsher on food products, yet in a speech a few years back to mark 25 years since his father’s passing, Rav Landau recounted how his father had once sent him to Jerusalem to pay a visit to a well-known dealer of tefillin retzuos, who sold his merchandise all over the country.

“My father asked me to examine the retzuos,” Rav Landau said. “So I let the dealer know that I wanted to watch how the retzuos were made in the factory.

“I arrived, and to my surprise, I saw him spraying plastic-rubber spray on the leather. You see, leather has a thin layer of tiny scales that don’t hold color long term, so in order to resolve this, that layer needs to be scraped off. But the scraping reduces the sheen on the strap. As a solution, the man was spraying the straps, and then painting over it. I gasped. The dyeing process is a halachah given to Moshe at Har Sinai! ‘Are you coloring leather or plastic?’ I asked him. But he played innocent and said that during the next stage, he scrapes off the spray and that helps the straps remain smooth and shiny. I told him, ‘Let’s test it to see if that’s realistic.’