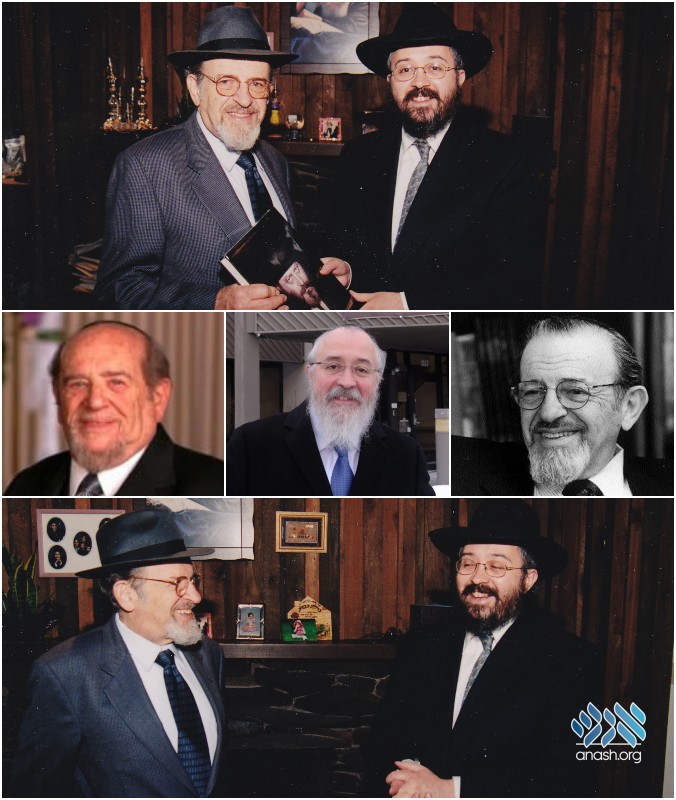 Rabbi Yosef Greenberg of Anchorage, AK describes his encounters with Rabbis Norman and Maurice Lamm, and the friendship that formed following a fateful cruise to Alaska.

Rabbi Norman Lamm, longtime Chancellor of Yeshiva University, passed away on 8 Sivan, 5780 at the age of 92. Alaska Shliach Rabbi Yosef Greenberg had a decades long relationship with Rabbi Lamm and his brother, Rabbi Maurice. A recent article explored Rabbi Lamm’s connection to Chassidus and Chabad. To complete the picture, Rabbi Greenberg spoke to Anash.org about his relationship with the Lamms.

In 2001, Rabbi Norman Lamm, who passed away in May 2020, visited Alaska with his wife and her sister while participating in a cruise. While planning the trip, he called to let me know that he would be staying in a hotel near the community over Shabbos and wished to join us at our Chabad House for davening and the Shabbos meals. I asked him if he could speak at a Shabbaton for the community; he said he would be honored.

When the cruise arrived, I went with my children to pick them up. At the time, we had just finished building our Mikvah, and Rabbi Lamm was excited to see Chabad’s first construction project in Alaska. The Chabad campus and museum we have today had not yet been built. I took Rabbi Lamm and his family to the Mikvah before we continued on to Flattop, a popular peak of the Chugach Mountains just outside the city of Anchorage that boasts a spectacular view of the city.

On the way back, as we drove down the mountain, smoke began coming out of the car and we had to stop at the side of the road to cool the engine. While Rabbi Lamm and I got out of the car to survey the situation, Mrs. Lamm and her sister began telling my children about their youth in Crown Heights in the 1940s. They were young when the Rebbe first came to America, but they remembered that when the Rebbe used to walk in the street, everyone would come out of their houses to watch. In Mrs. Lamm’s words, “He looked like a prince.”

On Friday, Rabbi Lamm gifted me with a copy of his book titled The Religious Thought of Hasidism, with a beautiful inscription written inside. In return, I gave him a copy of the book Y’mei Bereishes, which I had the zchus of authoring with the help of my friend Rabbi Eliezer Zaklikowsky.

Over Shabbos, Rabbi Lamm was very involved with the community, engaging them with both public lectures and personal conversations.

There was a young man from a prestigious secular family who had become involved with Chabad.  As he grew closer to Yiddishkeit, he wished to study in a yeshiva. Thinking that Tiferes Bochurim in Morristown might be too intense for him, he decided to try out Yeshiva University. When he went to check it out, however, he didn’t feel that they were going out of their way and taking his background into consideration. It left him feeling disappointed.

I told Rabbi Lamm about his experience, and he was distressed to hear about it. It had been a long Shabbos for him already, yet he took this student aside and spent an hour and a half speaking to him to see how he could help. As it turns out, this student ended up going to Morristown, where he became a baal teshuva, eventually moving back to Alaska. Today, he is known as Judge David Avrohom Voluck, and he makes a true Kiddush Hashem as a proud Yid and Chossid serving in his Sitka, Alaska courtroom.

Rabbi Lamm showed great appreciation for the work of Chabad; at one point over Shabbos he remarked, “Watching what you have accomplished here in Alaska, I now understand the tremendous power of shluchim, and why the Rebbe sent you all over the world.”

During one of the meals, Rabbi Lamm shared a well known story from when the Rebbe was in Paris. While teaching a gemara shiur, the Rebbe was giving over a Rashi when the men who were listening began calling out in confusion. They were reading from the same Rashi, but it wasn’t written the same way. The Rebbe stopped for a moment, then began giving it over exactly the way it was written in their gemaras.

After the shiur, some of the men opened the Rebbe’s gemara to see why it was written differently; they were surprised to realize that it was a different gemara completely, and that the Rebbe had been reciting the entire passage by heart! This Rashi had two different versions in different prints, and the Rebbe was reciting one of them; when he realized their print was different, he recited the second version instead.

Rabbi Lamm told me that he had heard the story from his neighbor who was a participant in that shiur. With a big smile, he concluded, “They don’t tell such stories about me!”

Over Shabbos, I showed him several letters from the Rebbe to Rabbi Soleveichik and he was very intrigued by them. It sparked a conversation about the special relationship the Rebbe had with Rabbi Soloveichik.

In 2004, Rabbi Maurice Lamm, Norman’s brother, was a guest speaker on a cruise to Alaska. During the trip, he had a massive heart attack – so bad that it tore apart the transistor that had been placed in his heart previously due to an existing condition.

Rabbi Norman called me crying – it was such a bad heart attack, they thought it was the end. He told me that they were flying his brother in to the main hospital in Alaska, Providence Hospital in Anchorage, and asked me to be there when the helicopter arrived since his brother was alone there without family; he would be getting on a flight to Anchorage himself but wouldn’t arrive in time.

I went to the hospital and waited for him to arrive with the helicopter. Rabbi Maurice was still awake when he was brought into the hospital. I told him that his brother had asked me to be there, and asked if he wanted me to write to the Rebbe’s Ohel for a brocha. He responded by nodding his head emphatically. Soon after he arrived at the hospital, they put him to sleep; he remained in a coma for 6 months.

Everyone thought it was the end. His brother came in with his whole family and they stayed for over a month. During that time we provided them with Kosher food and they came to us to daven and to eat on Shabbos. I went every day to visit him and check on the family.

Eventually, they had to return home. They air-lifted him via a medi-vac jet  to a hospital in New York, where he remained in a coma for several months. To everyone’s amazement, he miraculously woke up from the coma, recovered, and went on to live another 12 years. He always told me that it was the Rebbe’s blessing that saved his life.

Several years after this incident, Rabbi Zalman Shmotkin reached out to me. He wanted to upload Rabbi Maurice’s books, which were well known for their valuable insights into the Jewish life-cycle, on the Chabad.org website. Writers do not usually agree to this as they want readers to buy their own copies of their books, but when I asked Rabbi Maurice Lamm he responded, “I know my publisher won’t like it, but after everything Chabad did for me I will make it happen.” If you go on Chabad.org today you can find all three of his books, available to read in full.

Rabbi Norman Lamm and I remained good friends. Throughout the years, we kept up a steady kesher. He was always very generous in his support of Chabad of Alaska, expressing his appreciation for the Rebbe’s shluchim.