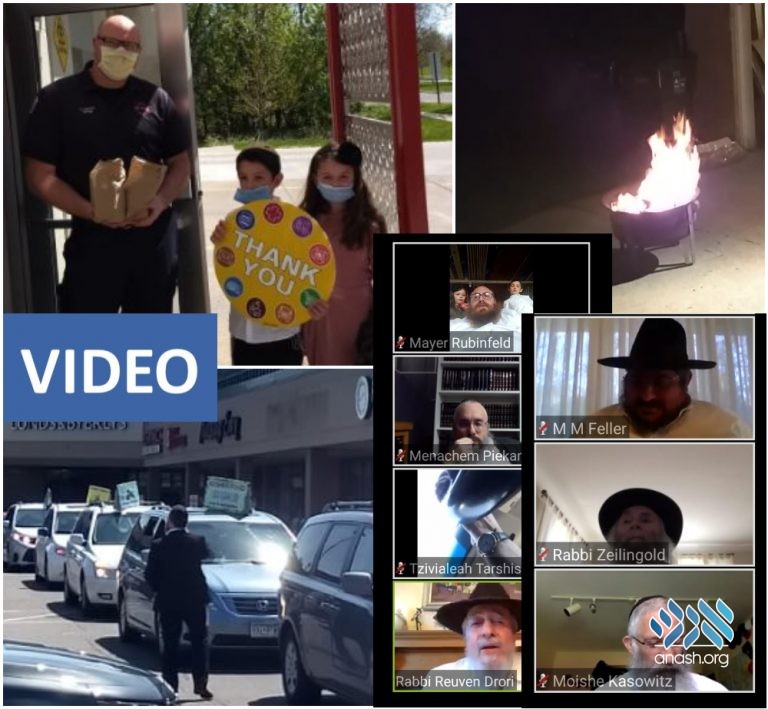 A full Lag B’Omer celebration was held in S. Paul, MN, with a bonfire, parade and farbrengen and even first-responder appreciation, all with full health precautions.

A complete Lag B’Omer celebration was held in S. Paul, MN, spanning the full 24 hours and involving every member of the community.

The celebration began on the night of Lag B’Omer with the annual bonfire. Although the community was unable to gather around the fire and sing the niggunim as other years, Rabbi Meir Rubenfeld organized a drive-through bonfire, with fresh chili and l’chaim served to everyone who came.

The next day saw the yearly parade with a small twist. Instead of marching by foot from the Lubavitch Cheder, families gathered in their cars for a social distancing parade.

The parade, sponsored by Upper Midwest Merkos and Rabbi Mendel Feller of Lubavitch House left from Adath Israel Synagogue and circled city streets. The cars, decorated with messages about the ten Mivtzoim, displayed Jewish pride on the streets.

Afterwards, Rabbi Rubenfeld, who is a chaplain for the SPPD, stopped by the police station to deliver goodies for the officers and a sincere thank you to all the officers for their work.

In the afternoon, a farbrengen was held for the community on Zoom. Led by Rabbi Asher Zeilingold and Rabbi Mendel Feller, the community farbrenged about the special day of Lag B’Omer and the potential it holds for each of us.

At the farbrengen, the community even got to hear a rendition of “Bar Yochai” by Rabbi Reuven Drori. The yearly rendition, a community tradition, was unable to happen due to the limit on gatherings, but was made possible with the Zoom meeting.