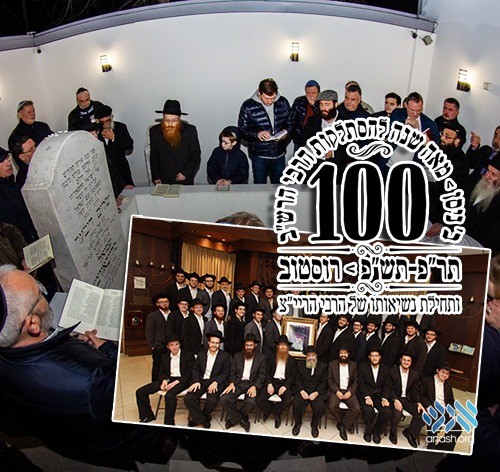 The Yeshiva Gedolah of Greater Miami in Florida announced that it will be traveling to Rostov-on-Don, Russia, to commemorate the 100th yartzeit of the Rebbe Rashab.

The trip is set for 2 Nissan 5780 (March 26-29, 2020) and they will be joining local Jews and Lubavitcher chassidim and bochurim from around the world who are planning to be there as well.

Rostov is home to the Ohel resting place of the Rebbe Rashab, Rabbi Sholom DovBer Schneersohn (1860-1920) who has devoted himself to the future of the Jewish nation by involving himself in education on all levels.

The decision to make the trip was made by the Rosh Yeshiva Rabbi Leibel Schapiro, who is also the Rabbi of the Chabad community in Miami and a member of Vaad Rabbonei Lubavitch.

Rabbi Schapiro said: “It is a great thing to replant, so to speak, Tomchei Tmimim back there so we can get the effect of what Tomchei Tmimim was when the Rebbe Rashab started it. We hope this will affect us now in our lives today.”

The trip of the Miami Yeshiva is being generously sponsored by R’ Zalman Fellig. In Rostov they will be welcomed by the Shliach Rabbi Chaim Danzinger who is coordinating the mass pilgrimage of people from the United States, Canada, Europe and Israel for Beis Nissan 5780.

Rabbi Schapiro said that for the next few months, bochurim in the Yeshiva will be participating in appropriate preparations for the yartzeit. Among them will be shiurim given in the Rebbe Rashab’s chassidus.

“When we spoke about the trip, there was an hisorerus by the bochurim that we are going to connect to what Chassidus was and bring it into our lives as chassidim of the Rebbe and the way the Rebbe wants a tomim to be,” he said. “This is something very special and it will be very special there.”

Rabbi Schapiro emphasized how the Rebbe would stir excitement surrounding milestone dates in the history of Chassidus, such as the 200th year of the Baal Shem Tov’s yartzeit, the 150th year of the Alter Rebbe’s yartzeit and on the 50th yahrtzeit of the Rebbe Rashab.

“Now that it is 100 years to the Rebbe Rashab’s histalkus, the Rebbe would be very happy if we made a big deal over it to strengthen our chizuk in learning Chassidus, and our connection to the Rebbeim, and obviously, strengthening the hiskashrus to our Rebbe. It is a very special time.”

Events surrounding Beis Nissan are planned to begin on Thursday and include Shabbos (March 26-29, 2020). Rabbi Schapiro will be one of the prominent Chabad rabbonim, mashpiim and Shluchim from around the world to lead the central farbrengen there.

For travel information for this grand occasion, visit http://beisnisan.com