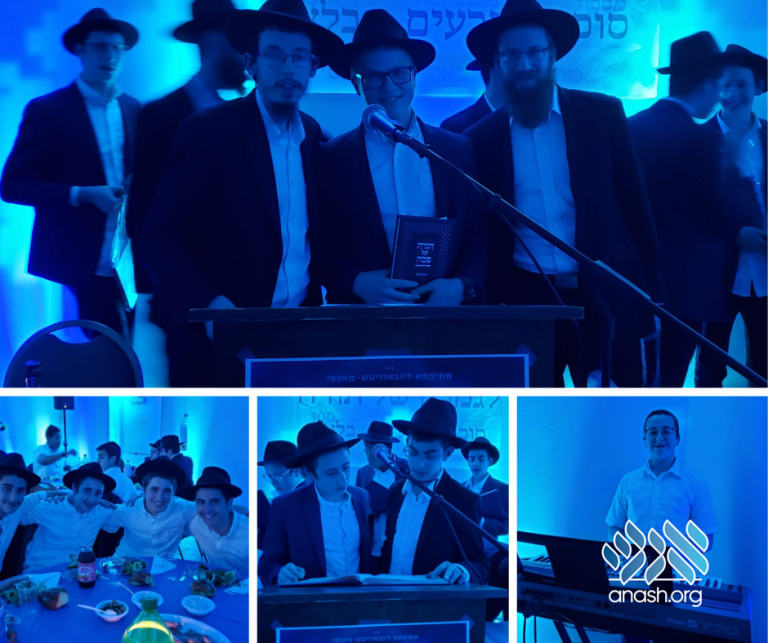 As the year drew to a close, Mesivta Lubavitch of Monsey held a Chagigas Siyum celebrating a year of success in learning.

The event featured several siyumim, some masechtos that had been learned as part of seder, and some on shiurim that were completed as extra curricular learning. As part of a special mishnayos program, a group of bochurim completed the entire Seder Zeraim. The Siyum was made by Hatomim Saadya Liberow.

During the year, the yeshiva launched Mivtza 100 Blatt, an initiative aimed at encouraging the bochurim to learn more than the seder requirements, and rewarding them for it. At the Chagigas Hasiyum, Hatomim Mendel Simpson made a siyum on a masechta, one of three siyumim that he made throughout the year.

A number of talmidim from shiur gimmel spoke, reflecting on the growth they experienced over the past three years, and thanking the maggidei shiurim for nurturing them.

Their maggid shiur, Rabbi Mendy Klein, and mashpia, Rabbi Shloimy Kagan, presented each bochur with a gift and personal note. The gift was a Hagaddah Shel Pesach with the Rebbe’s explanations, chosen in honor of completing a year’s learning of Maseches Pesachim.

“The atmosphere was beautiful,” said Rabbi Sender Lustig, menahel ruchni of the yeshiva. “It was a true celebration of Torah and Kedusha.”