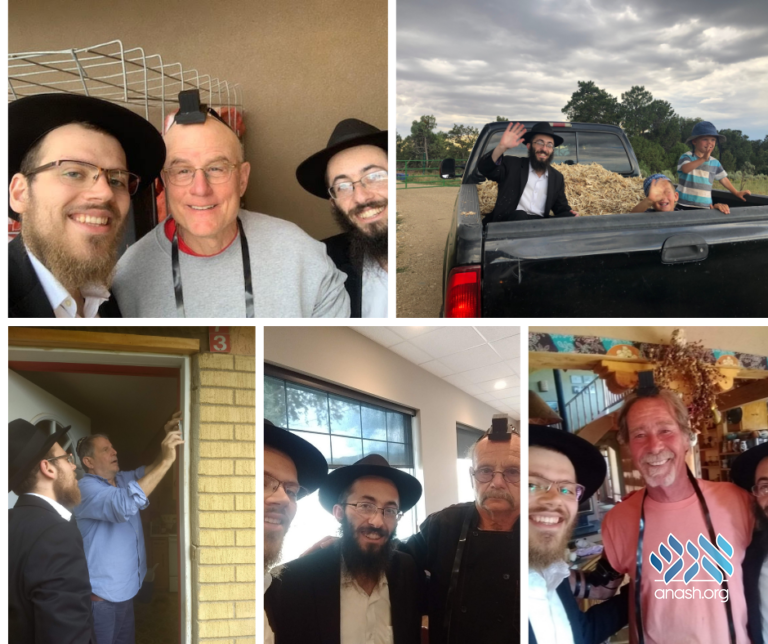 Rabbi Eli Kaminetzky, shliach of Taos, shared with Anash.org some of the stories they encountered:

Sananda, aka Sholom HaCohen, was initially hesitant to let the bochurim in. Having been a “sikh” for 10 years and engaged in Buddhism r”l, he certainly wasn’t expecting this “blast from the past”. But quickly he warmed up, and his many Jewish memories started gushing forth. He soon happily put on tefillin.

I was fixing my glasses at a local store and I asked a woman if she was Jewish, she said her husband Dennis is. All we knew was the name of the area they lived in, a group of homes in the middle of nowhere. The bochurim traveled there and tried finding out where he lived, but ended up turning in the opposite direction of his house. They stopped a car and asked “do you know Dennis?” “I’m Dennis” he answered. He just happened to be running an errand on that street. He and the Bochurim ended up having a meaningful conversation!

We have been trying to get in touch with Ken for quiet some time, then we heard (mistakenly) that he moved. The bochurim ended up at his home and had a great conversation. He said he misses authentic Yiddishkeit. He was inspired from the Rebbe’s picture which they gave him and he put on tefillin.

Another interesting story was with Mark. Mark had a difficult upbringing. His father was mostly absent, (in prison) so he didn’t have any positive Jewish experiences growing up. We were putting on tefillin one day, and he later found out that this was his father’s yartzeit. He was very moved by the Hashgochoh Protis. He also mentioned that he wasn’t educated in Yiddishkeit and would like to learn. The Bochurim stopped by and they had a very warm conversation. He sat for more than an hour asking all sorts of questions and satisfying his curiosity!

Thank you to the Merkos Shlichus bochurim for looking out for each and every isolated Yid in the Taos mountains and forests!