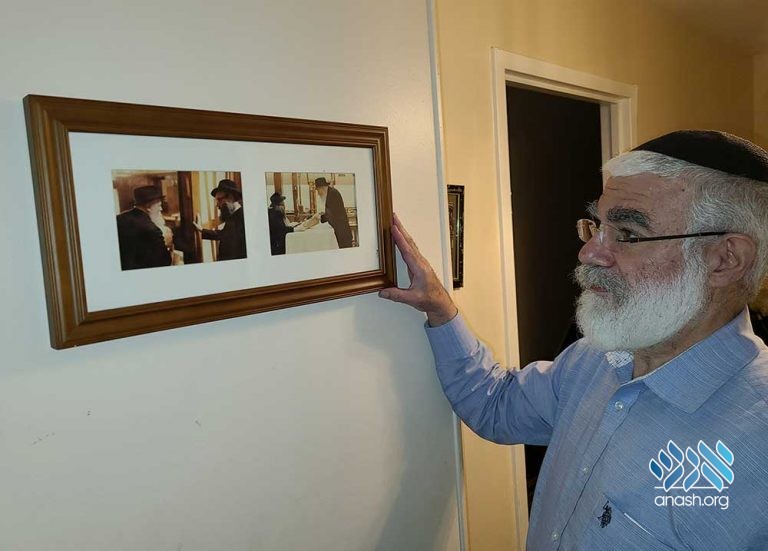 Rabbi Yehudah Leib “Leibel” Groner, a longtime aide, known as the “gatekeeper” of the Lubavitcher Rebbe, passed away in April from Covid-19. He was 88.

Since Purim, the coronavirus had spread rapidly in Crown Heights, spurring a shutdown of shuls and yeshivahs in the neighborhood that has been home to the Chabad-Lubavitch movement for eight decades. (Since the outbreak there have been over forty funerals in the neighborhood.)

Engaged couples, loath to push off their weddings indefinitely, opted to celebrate with a small group while observing social distancing guidelines. One treasured custom no one wanted to sacrifice, however: Before their wedding days, the grooms made their way to Rabbi Groner’s small office at Lubavitch World Headquarters, where the elderly rabbi allowed them to use a prayer book that belonged to the Rebbe. Tragically he passed away shortly after the wedding season in the neighborhood came to a halt.

Rabbi Groner began his career in 1949 as an editor at Chabad’s Kehot Publications Society. the Rebbe, who would assume leadership of the movement in 1951, was editor-in-chief. A talmid chacham, Rabbi Groner footnoted, indexed, and compiled volumes for the publishing house for eight years. Especially dear to him was his part in compiling the magnum opus of Chabad-Lubavitch customs, which had never been done before.

After his marriage to Yehudis Gurevitch in 5714/1954, Rabbi Groner was invited to serve as one of The Rebbe’s aides. He spent many hours in the Rebbe’s presence—the Rebbe’s demanding schedule began early in the morning and often ended in the wee hours of the following day when he finished receiving people in private audiences.

Among his other duties, Rabbi Groner acted as the Rebbe’s doorkeeper, ushering in and escorting out the tens of thousands who sought the Rebbe’s counsel over the years. When he felt it was appropriate, he would ask them to share their impressions of the Rebbe, and thus amassed a large body of anecdotes and stories. Some he recorded in a private diary, parts of which have been published in recent decades.

While some of the Rebbe’s aides became well-known in the Jewish world, Rabbi Groner kept a lower profile. He was in the background, making sure that those who entered a private audience with the Rebbe kept to a tight schedule. Indeed, he was known principally as an enforcer, knocking on the door when the allotted time for an audience was up. Though the Rebbe often overruled him, it was his persistence that allowed the Rebbe a few short hours of rest before the next day began.

“The Rebbe wanted him to do this,” Eli Slavin, long time Crown Heights activist, and became Rabbi Groner’s right hand for close to three decades, “despite at times overruling, the Rebbe would later express the importance of his role in enforcing the schedule.”

His role won him few friends among those who sought the Rebbe’s help, but Rabbi Groner did not seem to mind. “He was getrai in his job,” says Rabbi Mendel Feller, a Chabad representative in West S. Paul, Minnesota, using the Yiddish word for “faithful.” “He was very devoted to the Rebbe’s comfort and time.”

When the Rebbe replaced private audiences with “Sunday Dollars,” distributing a dollar intended for charity and a blessing to the hundreds of people who lined up each week outside 770 Eastern Parkway, Rabbi Groner stood at his side, making sure that the encounters remained brief.

Rabbi Groner’s was a prestigious role, but it was not well paid. Los Angeles philanthropist Berel Weiss, who grew up in a Hungarian Hasidic family, remembered from his childhood that it was customary for Hasidim to contribute money to a Hasidic leader’s aide. In this spirit, he once offered Rabbi Groner a check for his personal use.

“Not only did he not accept it, he got angry,” recalls Mr. Weiss’s son, Rabbi Moshe Weiss, a Chabad representative in Sherman Oaks, California.

Mr. Weiss did not give up. When Rabbi Groner was marrying off his children, the philanthropist made sure that the catering hall and musicians offered the Rebbe’s aide a discounted rate, paying the difference himself.

Rabbi Groner was born in New York City, in 1931, to Rabbi Mordechai Avrohom Yeshayah and Menucha Rochel Groner. The elder Rabbi Groner was a fundraiser for Colel Chabad, the oldest social organization in the Holy Land, and had moved from the then Palestine to the United States to raise money from American Jews. The Groners, who traced their roots back to the first Chabad Rebbe, helped form the core of the small Chabad community in Brooklyn.

The young Leib joined the Lubavitch yeshivah, which had moved, along with the Frierdiker Rebbe, from Otwock, Poland, to Crown Heights in 5700/1940.

A gifted student, Leib became known early as an orator, speaking at community events. It was a role he would revisit later in life.

After the Rebbe’s passing in 5754/1994, Rabbi Groner began to publically share the stories and experiences he had gathered in his four decades in the Rebbe’s secretariat. Menachem Benshimon recalls that when he was thirteen years old, he called Rabbi Groner and asked him to come and lead a gathering with his eighth-grade class. “He never asked me, how many people would be there, he made no conditions,” the Crown Heights activist recalls, “he just wanted to make sure that it would fit in with his busy schedule.”

Mr. Slavin says that it was with every event that he asked him to join, he never asked how many people would be there, he agreed every time, “He just wanted to know what kind of crows was there.” He says that he would always repeat, “Da lifnei mi ata oimed, know before what type of crowd you will be speaking for.”

The same was when he arrived, he recalls, “Even if there was two people there, it did not make a difference.”

To be a constant presence at the Rebbe’s side, Rabbi Groner made significant sacrifices in his personal life. The Rebbe was aware of this, and on at least one occasion, encouraged him to involve himself with his family. He once told Rabbi Groner that, before he gave a donation to charity, he should ask his wife’s permission. Mrs. Groner herself was active in the community and Chabad activities. Together with Mrs. Leah Klein, she organized a campaign to promote observance of the kosher laws.

“They were extremely devoted to each other,” says Mr. Slavin, “they constantly worried about the others needs, and how to make the other more comfortable.”

After the Rebbe’s histalkus in 1994, Rabbi Groner became a roving speaker, inspiring many people with his stories, and also began a small fund to assist the needy.

Many would continue to bring their petitions to the Rebbe to him, and he would bring them to the Rebbe’s resting place in Queens, which he would go to at least twice a week.

Mr. Slavin tells of a boy and girl friends who asked him to remember them at the Rebbe’s gravesite. “Rabbi Groner was always social,” Mr. Slavin says, “he took an interest in how you are doing, how is your family and so forth.”

During their conversation, Rabbi Groner realized that they were living together before their wedding. He nonchalantly told them, “You are asking me to mention your names for a bracha at the Rebbe’s tziyon. That is you want the Rebbe’s brachah. In addition, you of course want Hashem’s brachah. The Rebbe would surely not want you to live together before your wedding. Hashem would not want you to live together until you are married.”

He left it at that, gave them his wide smile and wished them well. They later told Mr. Slavin that they decided to move into separate houses until their wedding.

Over the decades of assisting Rabbi Groner, Mr. Slavin would speak try to nudge him to talk about others. “He would never talk about others,” he says, “he never said a negative word about anybody. He would say, ‘Eli they should all be well.’”

Rabbi Groner was honest to a fault, he tells, there was once a will that he was going to arrange to go to Rabbi Groner’s fund to help the needy. Rabbi Groner refused, “To me it looks like the person did not want the will to come to me. Even if it could be interpreted that way, I do not believe that the deceased wanted that it should. Please reach out [this and this individual] and arrange that it should go to the fund that he meant it should go to.”

Through a special fund, Rabbi Groner would distribute hundreds-of-thousands of dollars before every yom tov. In the hospital he was making an effort to tell his family something. With oxygen mask coving his mouth, they could not understand him. He took off the mask and asked them what was happening with the signed checks for the needy. When he heard they were not sent out, he was not happy and beseeched that it should be sent out as soon as possible. His last wish again, was not himself, but others.

His tragic loss to Covid 19 would have brought thousands to his funeral, however, it was a small crowd on the Crown Heights streets. Family members mourned in separate houses with comforters using zoom and whattsapp.