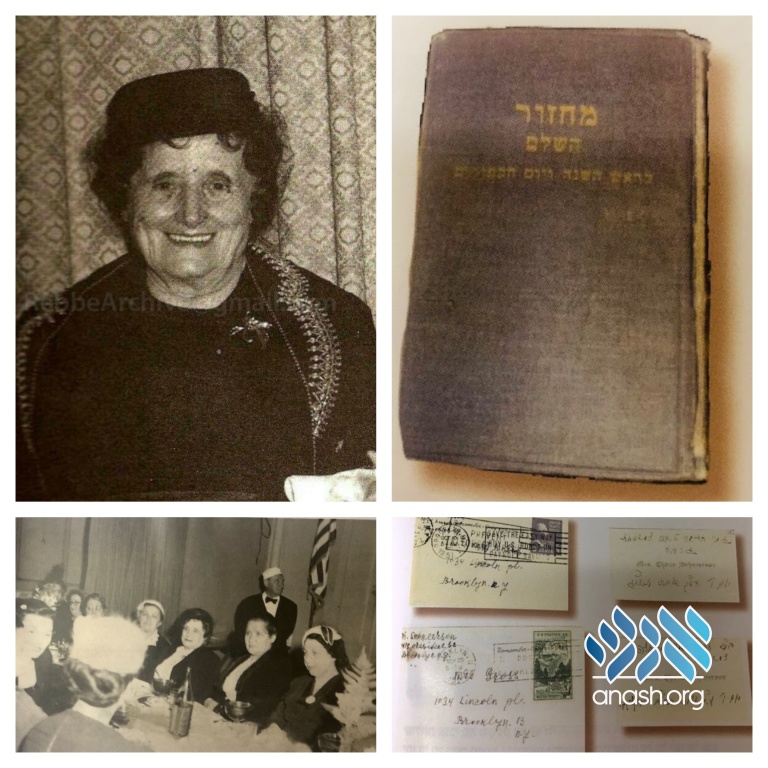 From the Avner Institute

“After covering the grave, the Rebbe said some Tehillim and the Kaddish, but wept so much that he could not finish. The entire crowd, including rabbis and leaders, felt a deep sense of mourning”

On 6 Tishrei 5725/1964, Rebbetzin Chana Schneerson passed away, her son faithfully at her side. Rebbetzin Chana had been more than a mother to the current Rebbe—she was a true help mate to her husband, Rabbi Levi Yitzchok, with whom she shared painful exile in Soviet Russia. After over a twenty-year separation, the Rebbe had personally escorted her from postwar Paris to a new home in America.

The Avner Institute presents the diary of Rabbi Menachem Wolf, at the time a yeshiva student at 770, who recorded those dramatic final days of the Rebbetzin’s life, the Rebbe’s bitter grief, and the unfailing devotion that he carried to her grave.

At ten a.m., the Rebbe entered 770 for morning service. After the prayers began, the Rebbe kept looking to the side, as if waiting for someone or something. Rabbi Groner approached and spoke with him for a minute, then went to Rabbi Hadakov and then back to the Rebbe. As of now, no one knows what exactly is happening, but it seems as if something is wrong.

At 1:30 p.m., the Rebbe entered the shul for a farbrengen, during which Dr. Seligson spoke to him for a few minutes. After asking the Rebbe for his mother’s name, Dr. Seligson called out, “Chana bas Rochel l’refua shelaima—Chana, daughter of Rochel, for a speedy recovery.” It was then that the crowd understood.

As the farbrengen continued, the Rebbe explained the quote from the Ba’al Shem Tov, that the concealment of G-dliness in the time of Exile is itself hidden and not noticeable. The Rebbe began to sob, leaning his head on his hands—a frightening sight to behold.

Suddenly, the Rebbe crossed his hand over his forehead, and the cries immediately ceased. Later, while speaking about the non-Jews’ inability to obstruct G-d’s mitzvoth, the Rebbe began to cry again.

The farbrengen ended at 4:00 p.m. Reb Beryl Junik ran to Rebbetzin Chana’s house and found the Rebbetzin breathing heavily. When he approached her she grabbed his arm, saying, “Help me!” It seemed that she wanted to continue, but couldn’t. Reb Beryl hurried to 770 and told Dr. Seligson that Rebbetzin Chana’s condition had worsened, and the doctor hurried off.

After mincha, Reb Beryl told the Rebbe that his mother had asked to see him. The Rebbe rushed to his room, dropping off the handkerchiefs from his pocket, and continued to his mother’s house. He arrived to find his mother in critical condition, lying in pain and breathing with difficulty. The Rebbe approached her bedside and asked Reb Beryl to call two more doctors. Meanwhile, Rebbetzin Chaya Mushka, the Rebbe’s wife, arrived.

At first the Rebbe opposed sending his mother to the hospital, but after the two doctors, in addition to Dr. Seligson, agreed that it was vital, the Rebbe said, “Since this is the opinion of three doctors, I give in.” She was immediately placed in an ambulance, the Rebbe at her side.

As soon as the news reached 770, everyone sat down and recited Tehillim. Many people walked towards the hospital, along with a “Shabbos Goy” who carried a meal for the Rebbe.

At the hospital, the doctors did all they could but, after a while, emerged and told the Rebbe that they thought it was too late. When the Rebbe suggested a number of possible medical methods to save his mother’s life, the doctors promised to try. But, shortly later, the doctors again said that their efforts were to no avail. Once more, the Rebbe proposed ideas, but things did not get better.

At approximately six p.m., Rebbetzin Chana’s soul ascended in the presence of the Rebbe, who stood facing the window, his eyes heavenward. All was quiet; only every so often, the Rebbe let out a cry. Some of the people there, realizing the Rebbe had not yet eaten, offered him the meal that was brought, but the Rebbe refused and asked if there was a Rav present who could rule if eating the meal under such circumstances was permissible. Rabbi Groner approached, answering that he was a Rav and that the Rebbe should eat, but the Rebbe still refused. Instead, he asked if there was a Code of Jewish Law around. In the end, the Rebbe didn’t eat the meal.

The Rebbe asked if anyone from the Chevra Kadisha, burial society, were present, then asked for Rabbi Jacobson. Seeing all the pushing, the Rebbe said, “No one should push! Only those who have been in the mikvah today should enter the room to say Tehillim. The yeshiva students are here totally unnecessarily, and as for everyone else, there’s no reason to push; this is not a farbrengen.”

When Rabbi Y. Weinberg asked if he should announce the news of the passing on the radio, the Rebbe answered affirmatively. Rabbi Y. Jacobson and Rabbi E. Simpson of the Chevra Kadisha arrived and asked everyone to leave the room, except for some of the elder Chassidim.

At the end of the Sabbath, the Rebbe asked if anyone present had a prayer book, but no one did. After ma’ariv, the Rebbe said Kaddish. An hour later, Rebbetzin Chana was brought to her home. Before leaving the house, the Rebbe asked that a quorum of ten Jews remain there for the night.

At eight a.m., the Rebbe emerged from his house. The funeral procession was immediately called for at eleven. At 9:15 a.m., the Rebbe left his room and joined the minyan for Kaddish after Shir shel Yom. During the recitation, the Rebbe cried slightly.

At 11:05 a.m., the Rebbe, bag full of seforim in hand, was driven to his mother’s house. The funeral began straightaway, the Rebbe following closely behind the coffin. When the Rebbe noticed a photographer videoing the scene, he angrily motioned with his hand to stop doing so. The Rebbe gazed at the coffin until it was placed in the hearse, then asked if anyone knew where the plastic mat was (seemingly, the one onto which some blood had spilled) and a certain piece of wood. When those nearby answered that all had been arranged, the Rebbe appeared quite satisfied.

The procession continued by foot through Kingston Avenue onto 770, and from there to the cemetery. On the way, the Rebbe asked repeatedly, “Why are the students here?” The Rebbe also asked that the women not follow after the coffin.

During the burial, the Rebbe asked, “Where is the plastic?” Everyone was asked to search, but to no avail. The Rebbe apparently found this disturbing. Seeing so much pushing, he cried, “Leave me alone, why all the pushing? I see that I’m forced to keep order by myself! There is no mitzvah to push.” The Rebbe tried to make his way back to the car to see if the plastic was possibly there, but could not, due to all the commotion. In the end, however, the plastic was found.

After covering the grave, the Rebbe said some Tehillim and the Kaddish, but wept so much that he could not finish. The entire crowd, including rabbis and leaders, felt a deep sense of mourning.

Lines were then formed. The Rebbe removed his shoes and asked that students not participate. While passing by the Ohel, the Rebbe walked inside for two minutes, and after exiting, entered the car to be driven to his mother’s house.

Throughout the formal days of mourning, a lottery was arranged to determine who would participate in the Rebbe’s minyan. After the first afternoon service, the congregation passed by the Rebbe to offer condolences. The Rebbe, noticing students among them, darted them a startling glance, as if to ask, “What are they doing here?”

Morning service began at ten. Throughout the prayers, the Rebbe cried occasionally. Rabbi Z. Katzman, who was called to the Torah for the birth of a daughter, asked the Rebbe if she could be named after the Rebbe’s mother. The Rebbe agreed and blessed her with a long life (later sending sixty-three dollars, the numeric equivalent of “Chana”).

Throughout the day, many distinguished individuals came to visit the Rebbe. After evening service, Rebbetzin Chaya Mushka came to the house.

The Rebbe did not distribute the traditional honeycake, but it was rumored that he would do so on Hoshana Rabba. Following the afternoon service, the Rebbe rose and asked that a minyan take place in the house for each service throughout Yom Kippur.

At six the Rebbe went to the mikvah, then entered his room for a bit. Leaving while his face was covered with his prayer shawl, he blessed the students standing there.

The Rebbe went to the main sanctuary, stood up on a table, and chanted a blessing to all present. The relatively small crowd could not hear the Rebbe very well, since he spoke with closed eyes and many tears. When Rabbi Hadakov told this to the Rebbe, the Rebbe climbed onto the table a second time and repeated the blessing, word for word.