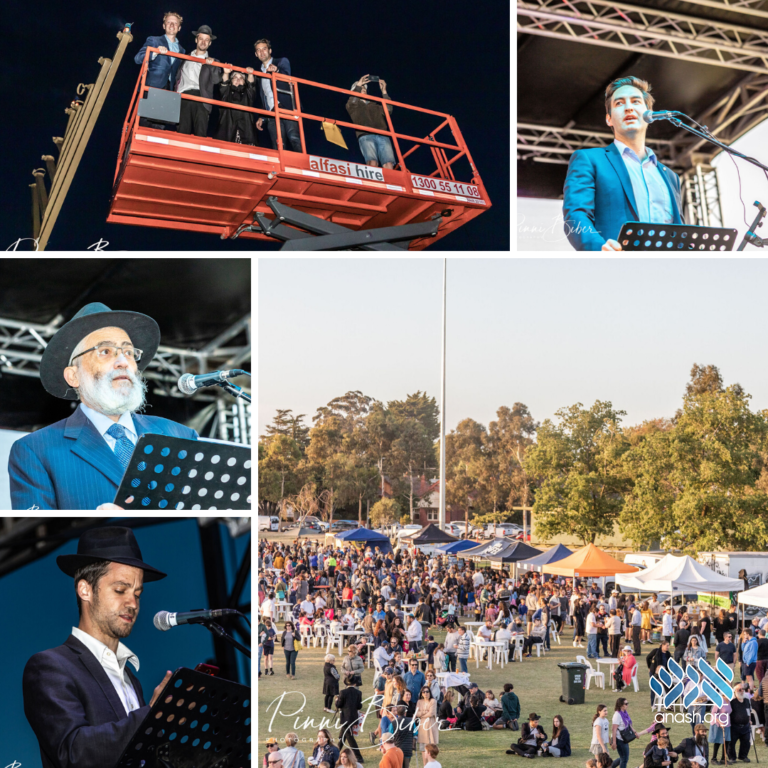 For decades, The Chabad House of Caulfield has been organizing the event under the leadership of Head Shliach Rabbi Yossel Gutnick, which had seen the annual event become Australia’s largest annual Jewish event with over to 10,000 people of all ages attending each year.

Revelers from the entire Jewish community and beyond convened on the park grounds in the afternoon to enjoy the exciting rides and entertainment for children and teens and to sit down with family and friends while enjoying a wide range of offerings from the local Kosher restaurants. The local Matana band excited the crowd with lively Jewish music and Chanukah songs.

Before dark, the community heard greetings from Rabbi Yossel Gutnick director of Chabad House of Caulfield and Head Shliach of Melbourne.
Which was then followed by greetings from Federal Government politicians Senator James Patterson, Josh Burns MP and state government representatives, James Newbery MP, Nina Taylor MP and the local mayor Margaret Essakoff. The greetings were followed by Tehillim chapter 118 for the safety and security of world Jewry by Rabbi Pinny Super.

A recurring theme of the speeches was the proud and unequivocal support of the local Jewish community and the land of Israel. Strong statements thanking and appreciating Australia’s unique support along with the US against anti Israel resolutions at UN and Australia’s willingness to move embassy to Yerushalayim.

Following a tradition of decades at Chanukah in the Park, the Menorah lighting was followed by a huge fireworks show and lively dancing.
Rabbi Pinny Super, the director of CYP – Chabad Young Professionals Melbourne, who organized the annual event on behalf of the Chabad House Of Caulfield, said, “it’s a remarkable thing to see thousands of young couples bring their children to Chanukah in the park this year, young couples who 25+ years ago themselves were children attending the same event, returning this year with their own children!”