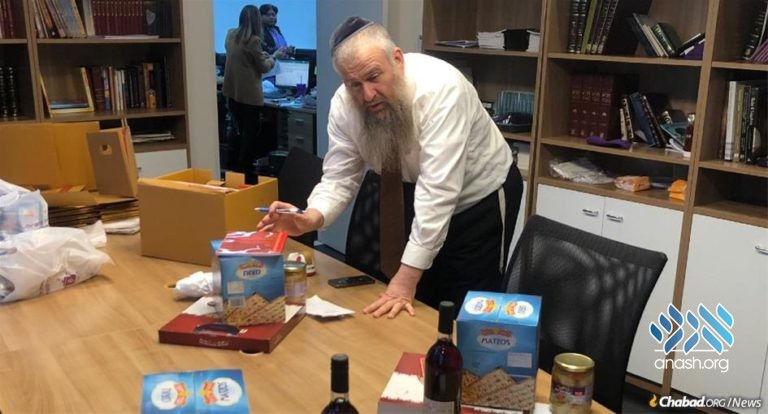 With most public Seders canceled, Shluchim in backpacking hotspots are reaching out to their former guests, to make sure that they have whatever they need for Pesach wherever they are.

Last Passover, Chabad-Lubavitch of Thailand oversaw Passover Seders for more than 5,000 across the tropical Southeast Asian nation—22 Seders held in five cities, from Bangkok’s five Seders to a mega-Seder in Koh Samui—popular with young Israeli backpackers flexing their newfound independence after their army service and holiday-makers from the world over.

A herculean effort and a logistical nightmare, Chabad of Thailand’s directors, Rabbi Yosef Chaim and Nechama Dina Kantor and 11 emissary couples in the kingdom—with the assistance of more than 40 rabbinical students—pull off some of the world’s largest Seders year after year, last year going through 7,416 portions of chicken, 7,362 portions of beef, 7,353 portions of salmon, 2,220 bottles of wine, 3,210 kilograms of matzah and 4,056 kilograms of salad varieties, served by 415 waiters.

But now, amid the global coronavirus health crisis, the soul-seekers, the free-spirited young backpackers, the industrious business travelers and the happy families enjoying a sunny beach vacation are no more.

The world travelers who have attended mega-Seders in years past may have physically left their far-flung destinations like Thailand, Nepal and Peru, and returned home to Israel and elsewhere, but they have not been left behind spiritually.

Like their colleagues in Thailand, Chabad emissaries in similar backpacker hotspots Nepal and Cusco, Peru, are reaching out by phone, social media and email to their former guests, as well as remaining residents and those who have not been able to return home, to make sure that they have whatever they need for Passover wherever they are.

Reaching Out to Returning Travelers

In Israel, where many of the backpackers and business travelers have returned, Tzeirei Agudat Chabad (Lubavitch Youth Organization) of Israel has been reaching out to returning Israelis and offering them the supplies and instructions to make their own Seders in a nation that is on virtual lockdown.

Backpackers and other Israelis who have never made their own Seders have been put in touch with the Chabad centers in their local neighborhoods, or with the Lubavitch Youth Organization.

Those returning to places elsewhere around the globe have been put in touch with their local Chabad centers as well, with resources and guides for those making their own Seders available on Chabad.org

Some of the world’s largest mega-Seders have been hosted in Israel by Colel Chabad—the oldest continuously operating charitable organization in the Holy Land—which has been hosting and providing for Seders for the poor and needy for centuries.

For the first time since its founding in 1788, public seders are prohibited in Israel this year. So instead of hosting 27,526 of Israel’s poorest and loneliest at their 132 public seders as they did last year, Colel Chabad is delivering complete Seders to their homes, including Haggadahs and instructions. Plus, they are providing all the food the needy homebound require for those who are in forced isolation during the entire holiday.

Caring for Those Who Remain

Chabad of Thailand is perhaps best-known among Jewish travelers for its legendary hospitality. “A regular Shabbat meal here is like a Seder,” says Kantor of the up to 2,000 guests that Chabad hosts weekly. These meals are frequently joined by Thailand’s local Jewish community and older retirees. With the tourists now gone, the local Jews, especially the older ones—many who live alone—have no one to spend Passover with.

“Many of our locals who usually leave for Passover have stayed put this year,” Kantor tells Chabad.org. “For many here, Judaism is centered around communal celebration—be it Shabbat dinner at Chabad or joining the Passover Seders,” explains Kantor. “My heart goes out for all our older community members who have no family to celebrate with at home.”

For the Kantor family itself the new circumstances are strange and sad as well.

“This is an unprecedented time for all of us,” the rabbi observes. “Since arriving here in 1993, we’ve never had a Shabbat meal alone, with just family.”

In its current national state of emergency, Thailand’s synagogues have been ordered shut, public Seders canceled and classes moved on to Zoom. The rabbi gives a “Daily Dose of Inspiration” online each evening on Chabad.org’s Facebook page, for his community and viewers worldwide.

Instead of reaching out to thousands collectively as they do in normal times, Chabad centers will reach “the individual from among the thousands,” says Kantor, distributing “Seder-to-Go” kits across the country, containing Passover essentials such as matzah, wine and a do-it-yourself Seder guide for the many leading their first Seder. “We baked personal-sized, individually wrapped matzahs to distribute this year.”

Like many rabbis this year, he and other emissaries in Thailand are offering online instruction to their regulars on how to lead a Seder, with instructional classes in both Hebrew and English. “I know that this sounds a little daunting,” he wrote in an email to community members and regulars, “doing a Seder on your own. Take a deep breath … have no fear! This requires a ‘reframing,’ as you have been used to going to a more communal form of Seder. Pesach Seders have been celebrated under all kinds of circumstances; the comfort of your own home is a wonderful place to have a Seder.”

Amid the chaos and confusion, Kantor sees a silver lining: “The Seder was originally intended to be a family-oriented gathering—a time for parents to retell the Exodus story and its lessons to their children,” he explains. “We’re teaching people how to lead their own Seder this year; for families, I hope this Passover will enhance their Passover experience.”

Smaller Seders for Those Still Stranded

Some 1,300 miles away, past the Andaman Sea and the Bay of Bengal, 4,600 feet above sea level, nestled on the Southern Himalayan slopes is the Chabad House of Kathmandu, Nepal. The original and longtime holder of the “World’s Largest Seder” record, they will be hosting several dozen people this year—a far cry from the more than 2,000 yearly attendees in the pre-corona era.

“Some Israelis are stranded in Nepal currently,” reports Rabbi Chezky Lifshitz, co-director of the iconic Chabad House of Kathmandu with his wife, Chani. “We’re hosting them in our home, as they have nowhere else to stay and eat. They will live with us until we can help them find a way out.” Nepal is under strict curfew, with no flights in or out, and most of Chabad’s Seder regulars fled before the country went into lockdown. “Normally, at this time of year, we’re arranging shipments from Israel of matzah and other staples, and preparing for the Seder in Kathmandu.”

A week before the holiday, rabbinical students would begin an arduous trek to the tiny village of Manang—at an elevation of 11,545 feet, the world’s highest Seder—arriving on the eve of Passover. This year however, Chabad will be sending “Seder-to-Go” kits to the handful of Jews, among them U.N. and other aid workers, who cannot make it to the Seder in Kathmandu.

Across the Pacific, high up in the Andes mountain range at 11,200 feet, in Cusco, Peru, a city known for its cultural and architectural beauty and a UNESCO World Heritage Site, Chabad-Lubavitch of Cusco, usually preparing for thousands of guests, is quiet; the South American nation of 32 million entering its third week of nationwide lockdown.

“In 2020, we’ve gone from 2,000 Seder-goers to 20,” quips Rabbi Ofer Kripor, who co-directs Chabad of Cusco with his wife, Yael. “But we will do or best to ensure that all those here—and all those who have been with us in the past, wherever they are this year—will have a meaningful and liberating Passover experience.”