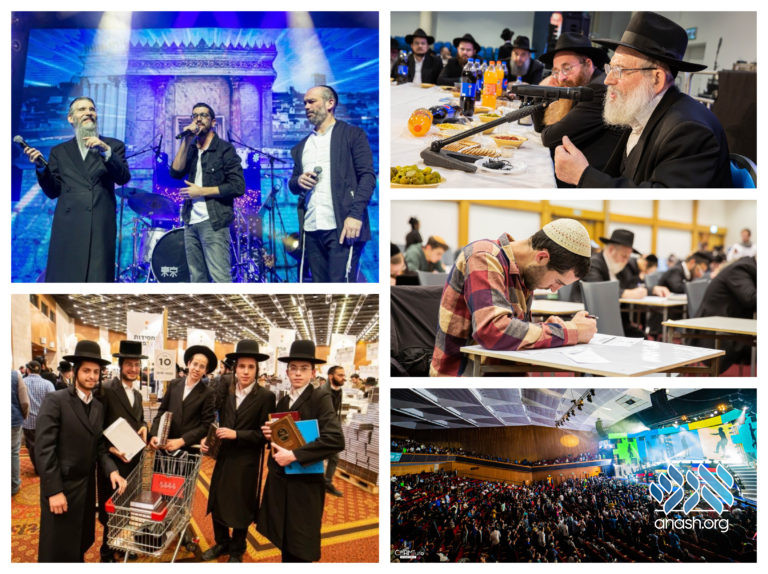 A musical performance with Avraham Fried, farbrengen with Rabbi Zalman Gopin, and the yerid hachassidus seforim sale were only some of the events taking place yesterday as part of the week-long “Tzamah” events in Yerushalayim.

Monday was a packed day in the International Conference Center in Yerushalayim with a plethora of events marking Yud Tes Kislev – Rosh Hashana of Chassidus.

The ‘Teddy Hall’ in the complex hosted the yerid hachassidus, the yearly sale where Sifrei Chassidus are offered at deeply subsidized prices. Staff walked among the excited buyers, helping each one find a sefer Chassidus appropriate for their age and stage.

In another part of the Conference Center, 2,000 bochurim and married men sat down for a test on ma’amarim from Derech Mitzsvosecha and sichos from Likkutei Sichos. The material had been studied as part of the “Lev L’daat – Tiferes Shimshon” study campaign.

In a third section of the building, one could find chassidim, Litvaks, Sefardim, and kipot srugot wearers listening to Rabbi YY Jacobson explain deep concepts in Chassidus. Later that night, the hall hosted a farbrengen with Rabbi Zalman Gopin with hundreds of participants.

One of the highlights of the entire week is the “Tzamah” musical performance. With singers Avraham Fried, Yonatan Razal, Chanan Ben-Ari, Shuli Rand, Yishai Ribo and others, the performance focused on Chabad niggunim.. The performance is holding at its tenth year, but this year it only reached new heights.

The events will be continuing for the rest of the week, with thousands more expected to attend and enjoy the Chassidus, niggunim and seforim sale.