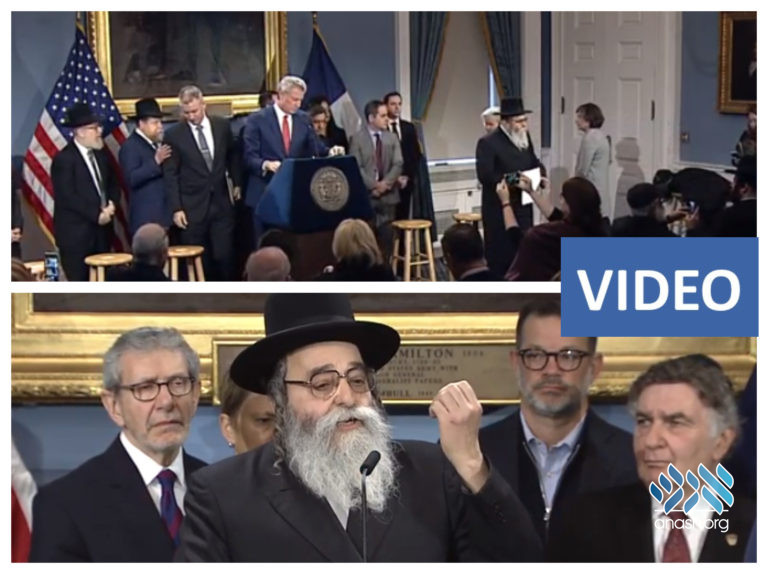 Watch: Mayor Bill de Blasio held a press conference with Jewish and other activists to address the response to yesterday’s horrific shooting. Separately, Governor Cuomo released his own statement.

A press conference was held today with NYC Mayor Bill de Blasio and Jewish activists in response to the deadly shooting yesterday in Jersey City.

The Mayor released the following statement: “On behalf of all New Yorkers, I offer our deepest condolences to the families of those lost in Jersey City, including Detective Joseph Seals who was tragically killed in the line of duty.

“The Mayor of Jersey City has asserted that this incident was a deliberate attack targeting the Jewish community. This tragically confirms that a growing pattern of violent anti-Semitism has now turned into a crisis for our nation. And now this threat has reached the doorstep of New York City.

“Although there is no credible or specific threat directed against New York City, I have directed the NYPD to assume a state of high alert. NYPD assets are being redeployed to protect key locations in the Jewish community and we will be announcing additional measures later today.

“History teaches us how dangerous it is to ignore this kind of hateful pattern. We must stop anti-Semitism aggressively and decisively, and I call upon all New Yorkers to join in rooting out this threat.”

“My heart breaks for the police officer and the three victims killed in yesterday’s attack on a kosher market in Jersey City.

“We now know that this disgusting act of violence was a deliberate attack on the Jewish community in Jersey City. Out of an abundance of caution, I am directing State Police to increase patrols and security around synagogues and Jewish establishments while New Jersey law enforcement further investigates this horrific act.