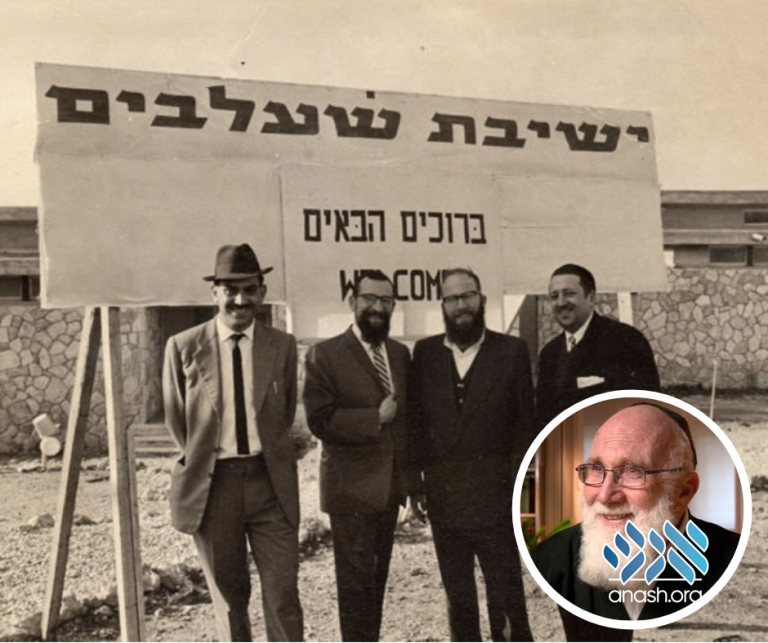 After being appointed the rabbi of the religious kibbutz, Sha’alvim, I founded a yeshivah there. As part of my position as the head of Yeshivat Sha’alvim – which grew rapidly, becoming a large regional educational institution – I traveled frequently to the United States on fundraising missions.

The first time I traveled to the United States, in the early 1960s, my father – Dr. Falk Schlesinger who ran the Shaare Zedek Hospital in Jerusalem – told me that I should visit the Lubavitcher Rebbe, whom he knew from his years in Berlin before the war. Of course the Rebbe remembered my father and received me warmly.

I met with the Rebbe a number of times over the years. Our conversations were always very enjoyable and, when we were talking, I felt that nothing else existed in the world. In the Rebbe’s room there was a bell that his secretaries would ring when a private audience had exceeded the allotted time. When it happened repeatedly during my first visit, I grew anxious, but the Rebbe calmed me, gesturing with his hand as if to say, “The ringing is meant for me, not for you, and I can decide when to end.”

Whenever I visited him, the Rebbe would invite me to sit down and the first item that he would bring up was the current course of study in my yeshivah. He would then proceed to discuss the topic we were studying, quoting a broad range of Talmudic sources. Of course, every time I came to America, the yeshivah was studying a different tractate of Talmud, yet the Rebbe was able to expound with ease on any topic. This made a very big impression on me.

During those visits I kept the Rebbe current on all the activities of our yeshivah, which had many unique aspects. In those days, before the Six Day War, Israel’s border with Jordan ran about a hundred meters from Sha’alvim. This meant we were always in contact with army officials, and yeshivah students who were of army age joined the defense force of the area. Later, after the Six Day War, when the Jordanian border was pushed back farther east, the students joined combat units in the IDF, and that is how our yeshivah became one of the first religious Zionist yeshivot with students alternating Torah study and army service.

When I explained this to the Rebbe, I mentioned that there were important rabbis who opposed yeshivah students’ participation in the military, maintaining that this concept skirted the border of what a yeshivah was about. Hearing that, the Rebbe smiled and said: “You’re on the border; stay on the border!” His words were obviously intended to be a play on words – being that we lived at the country’s border, our yeshivah should also hold the border in other ways. I took his words as a support for the concept of Yeshivot Hesder, at least for our particular constituency. He further reinforced this by sending us, on his own initiative, a check signed in his own hand for $54. That was clearly a stamp of approval and it brought us great joy – we felt deeply honored by the gesture.

Another thing that made Yeshivat Sha’alvim unique was that our students were involved in the agricultural work of the kibbutz because I felt that it wasn’t right to be living solely off charity. The kibbutz paid the yeshivah for the students’ work, and the students – most of whose parents couldn’t afford the tuition – were able to participate in covering their expenses.

When I told the Rebbe about this, he nodded his head, adding, “But you should not become the ‘commissar.’ You are the rosh yeshivah, and you have to be involved in teaching Torah and awe of G-d to the students. Appoint someone else to oversee their kibbutz work … The idea is good, but you should not be in charge of the who, what, when and how. For that you need a commissar. The students must know that he was appointed by you, but your interactions with the students should be only on topics related to Torah. Everything else, should be delegated to another person.”

It was good advice and I followed it.

One of our most memorable conversations concerned events that took place following the High Holidays of 1965, when the Arabs tried to take over the area between our kibbutz and Latrun – an area that had become “no man’s land” after the War of Independence and the armistice between Israel and Jordan. The Jordanians wanted it because this part of the Ayalon Valley has the best soil in the region, and they thought that by plowing the land they could establish facts on the ground.

Believing that the UN would give this area to the Jordanians if they took possession of it, we plowed there as well. But the Jordanians knew full well that we wouldn’t plow on Shabbat. Seeing this, they redoubled their efforts when we were not there. The chief rabbi of the IDF, Rabbi Shlomo Goren, visited our kibbutz and came to the conclusion that we had to stop them so that the border would not be demarcated in their favor, making defense of the nation that much more difficult and putting more lives in danger. Even in a dispute over straw, halachah permits Jews in border cities to arm themselves on Shabbat, as it is a security issue. Certainly having strategic land taken from us was far more dangerous than losing straw, so it was decided that we must plow on Shabbat.

The next Shabbat, which was October 30, 1965, they came out with thirty tractors supplied by the Jordanian government, and we went out opposite them – some with tractors and others with pitchforks. After a while, they shot at us, some fighting ensued and the UN got involved, but we succeeded in preventing the enemy from taking over the land. We did what we felt was necessary and correct in accordance with the interpretation of Jewish law (halachah) of our rabbis.

But when the story got out, some disapproved of our actions. I was curious what the Rebbe would say, but when I related all this to him, he remarked, “I already heard about it, and it was a novel application of the halachah.”

I didn’t understand, so I asked him, “Is the Rebbe saying that we did the wrong thing?”

“No, what you did was good,” he responded, “but it was still a novel application of halachah.”

He didn’t elaborate. But I believe he wanted me to know both that he approved and also that violating Shabbat even for a good reason should not be taken lightly. It is never simple or straightforward. Still, his constant support meant a lot to me.

Rabbi Meir Schlesinger served as the rabbi of Sha’alvim, Israel, for decades and founded there Yeshivat Sha’alvim. He was interviewed in February of 2011.