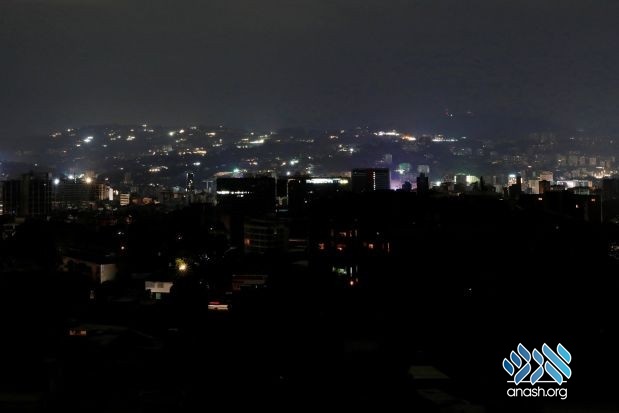 Jewish communities throughout South America were on edge as tens of millions of people were left without electricity after a massive power failure left Argentina and Uruguay almost completely in the dark, with the blackout spreading in pockets to other nations around the continent. Power began to be restored in some areas throughout the day.

The power collapse struck at just after 7 a.m., affecting virtually all of Argentina and Uruguay, as well as some cities in Brazil, Paraguay and Chile.

Rabbi Mendel Shemtov, co-director of Chabad of Uruguay in Montevideo, told Chabad.org that power in his area was out from 7 a.m. until about 1 p.m., causing more worry about related life issues that could develop than anything else.

“We operate the mikvahs and wondered how we would heat them in the event of a prolonged outage,” he said. “We also started getting calls from people about the availability of kosher food at the Chabad center.”

He said calls also were streaming in from around the world from people inquiring about how everyone was faring.

The blackout began in Argentina with a failure in the transmission of electricity from the Yacyretá hydroelectric dam on the Paraná River. Officials said they were working towards a “complete restoration” of power. The reason for the breakdown was not immediately clear, and civil-defense chief Daniel Russo warned that it could take eight hours or more for electricity to be completely restored.

The outage paralyzed parts of the transport system in Argentina’s capital, Buenos Aires, stopping trains from circulating and knocking out traffic lights. The Buenos Aires water company asked residents to conserve water since the outage meant its distribution system was not functioning.

Rabbi Mendy Grunblatt, co-director of Chabad of Palemo Nuevo in Buenos Aires, Argentina said the lights were out for about three hours in his area, causing only minor inconveniences as far as he could tell.

“Thank G‑d, the lights are back on, at least in the areas I know,” he said. “Some traffic lights are not working yet, and the cheder [Jewish school] was cancelled.”

Both rabbis said that the potential disaster was tempered by the fact that on Sunday in both countries, most people don’t work and sleep in late. In fact, said Grunblatt, “many only learned of the outages as the power started to come back on.”