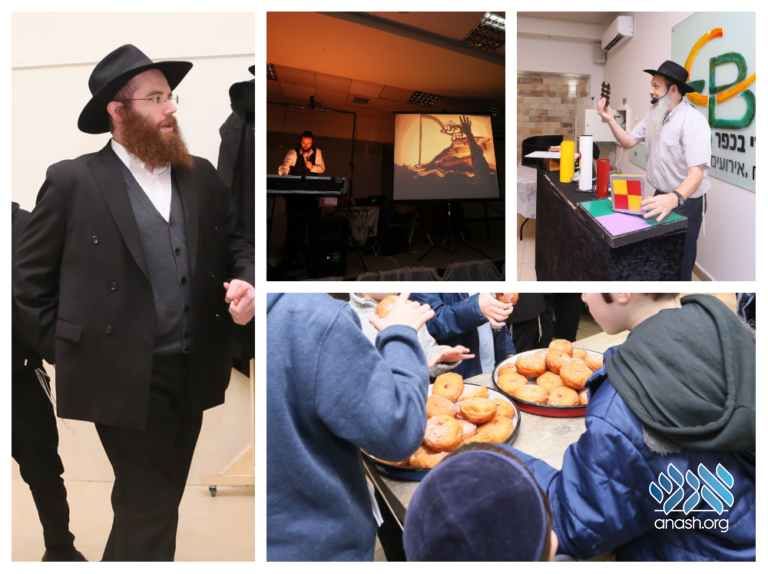 Lubavitcher orphans and widows from all over the Eretz Yisroel enjoyed a remarkable Shabbaton at Kibbutz Chafetz Chaim in Shefelah. The get-away was meticulously organized by Chesed Menachem Mendel – the educational arm of Colel Chabad – and sponsored by Rabbi Eliyahu Schlossberg in memory of his father Avraham Yitzhak AH Schlossberg.

The resort featured interactive programs for the entire family and included activities for parents and children, boys and girls with each age group being carefully catered to. The schedule was chock-full of activities, shows, trips, swimming, workshops, lectures and social games for the whole family.

Hospitality was at the highest level, with the full involvement of the hotel management, who did everything they could to make the stay a most pleasant one. From learning material to token treats and umbrellas due to the rain, the organizational team thought of everything!

A significant presence at the weekend was Rabbi Menachem Mendel Scharf, who flew in from the US especially for the retreat. Rabbi Sharf received unusual attention from the Rebbe, along with his orphaned brothers, and a major part of the retreat were his lectures and farbrengens.

Participants were deeply moved to hear firsthand about the special treatment Rabbi Sharf and his brothers received from the Rebbe. His fascinating words gave strength to the entire Chesed Menachem Mendel family.

Rabbi Scharf related that, while the Rebbe encouraged him and his orphan brothers, he did not compromise when it came to halacha. For example, once he and his brothers were talking during krias hatorah when they suddenly felt the Rebbe’s piercing gaze. “It was the first time the Rebbe looked at us with a stern and firm look, and when our eyes met, the Rebbe pointed to the Torah scroll, as if to say, one must not speak during krias hatorah.”

Rabbi Sharf also spoke one-on-one with the members the group, encouraging them to remember the Rebbe’s special attention and love for each of them.

In a strong atmosphere of camaraderie, the weekend was especially strengthening for the women who were able to spend much time talking with each other, and sharing tips on coping. At its conclusion, Chesed Menachem Mendel staff received an incredible amount of positive feedback from the guests.