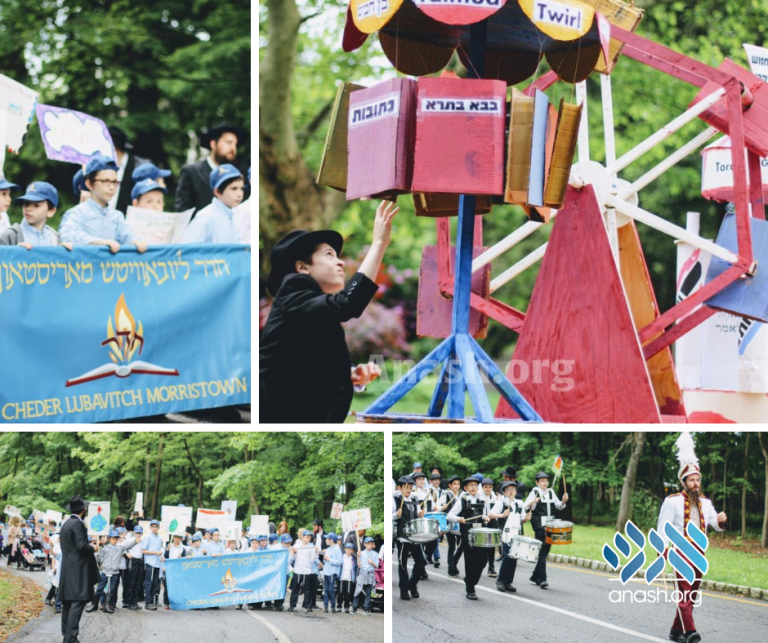 The echoing sounds of a marching band were heard throughout the quaint town of Morristown this foggy, rainy morning as the students of Cheder Lubavitch Morristown prepared for the big parade. Suddenly, like a gift from the Rebbe and in the merit of the yahrtzeit of Rabbi Shimon Bar Yochai, the drizzling rain subsided and the sun peaked out as the students all crowded in the large field for the rally – a time-honored tradition.

Escorted by a police contingent, and accompanied by a fully outfitted marching band, the boys and girls of Cheder paraded proudly around the neighborhood surrounding the Rabbinical College of America campus. This made a tremendous Kiddush Hashem.

Led by the incredible Morahs and Rebbies, students marched with handmade signs and floats: depicting the the Ten Mivtzoim, and other inspirational Torah messages. The middle school girls designed and built a massive replica of the Beis Hamikdash with the mivtzoim that will bring it to reality, and the boys created moving, spinning float dedicated to chinuch and the Rebbe’s message about teaching each child according to his nature.

A huge debt of gratitude is owed to Mrs. Chana Tunk, head of the girls’ school, and Rabbi Ari Wilschanski principal of the boys’ division who oversaw the rally and parade. A special thank you to Rabbi Piekarski, a proud Cheder parent, who served as the Master of Ceremonies in his usual dynamic and jubilant way and Mrs. Baila Piekarski for her hours of planning to make this parade a reality.

This parade, which the students spent weeks planning, is a demonstration of how Cheder Lubavitch Morristown is a special place for young boys and girls to develop a sense of positivity and love for the Torah and to gain confidence in their ability to shine in the Torah world.