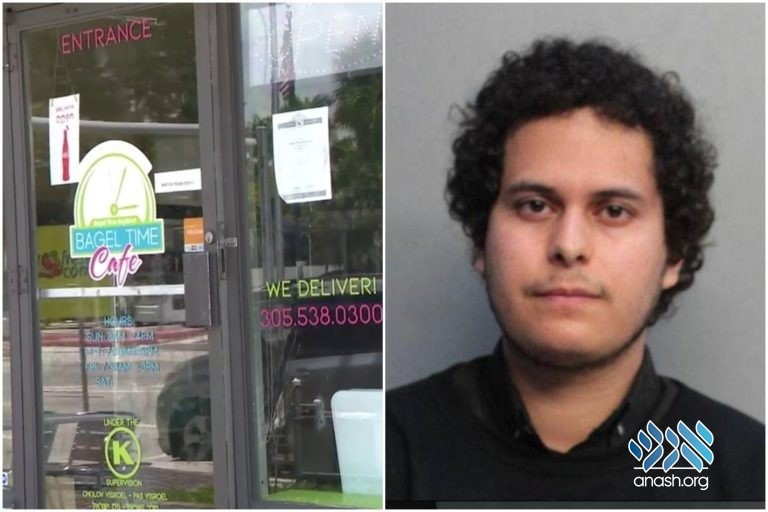 A Miami man was arrested Tuesday after police said he made threatening phone calls to a Miami Beach bagel store, targeting the business because its owners are Jewish.

According to the arrest report, Jorge Mateo Rucinque, 26, made several calls on Monday to Bagel Time Cafe on the 3900 block of Alton Road. In one of the calls, Rucinque told the owner’s wife that he would “explode the Jewish community,” the report said.

“The defendant made several disturbing statements causing the victim and establishment to be afraid for their safety,” the report said.

Rucinque never identified himself, according to police, but “continued to intimidate the victim because she is Jewish.”

The store’s owner, Yehoshua Nodel, told Local10 that the final call the man said: “We’re going to make sure you can’t overpopulate like you are now and we’re going to get rid of you.” The caller added: “I’m here. That’s my mission.”

According to the arrest report, Rucinque admitted targeting the Jewish community by searching online for the terms “Jews” and “kosher.”

Nodel said they called police because they felt threatened, and were not taking chances especially in light of the deadly shooting attack on a synagogue in Poway, California.

“Personally, I wouldn’t get a gun permit until today, but now I’m rethinking it,” Nodel told the station.

Rucinque works as an Uber driver.

Rucinque was booked in Miami-Dade’s jail on a charge of making telephone threats. He has since been released on $500 bond.