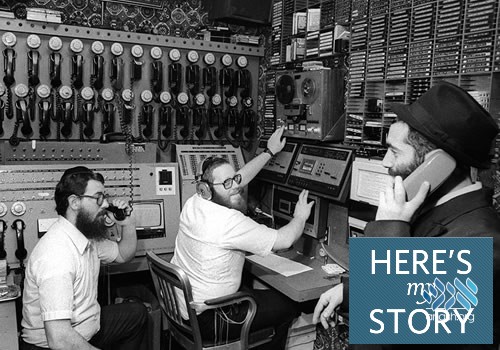 Rabbi Chaim Baruch Halberstam broadcast thousands of hours of the Rebbe’s farbrengens. After each broadcast, the Rebbe would request a report, and on occasion brought it with him to the Ohel.

Between 1970 and 1994, Rabbi Chaim Baruch Halberstam broadcast and recorded thousands of hours of the Rebbe’s talks and interactions with individual while directing the World Lubavitch Communication Center. Today, the office of WLCC serves as a visitors’ center and Chabad House, welcoming guests to 770.

He was interviewed by JEM’s My Encounter Project in March of 2019:

I was a young yeshivah student, just twenty-one years old, who didn’t know anything about electronics; I didn’t even know how a telephone operated. All I knew was how to dial – that’s as far as my knowledge went. But, by Divine Providence, I happened to be the right person at the right place at the right time, and I became a crucial cog in a wheel that eventually became the World Lubavitch Communication Center.

In those days, to make a live audio broadcast, three things were needed: number one, a phone line; number two, a place from which to operate; and number three, a room with view of the synagogue where the ceremonies would be held.

As it happened, I had all three. While a student at the Chabad yeshivah, I had been assigned a room in 770 that was available at the time. This room had been the office of one of the Rebbe’s secretaries – Rabbi Moshe Leib Rodshtein – but had stood empty since his passing in 1967. Of course, it had a phone, and also a window overlooking the large synagogue below, which had been installed so that he could participate in the prayer services while ill. From there it was possible to observe and record the entire event.

That first broadcast – which unfortunately, due to the time difference, did not reach Israel because it was Shabbat there already – was nonetheless successful, as people in Chicago and Los Angeles were able to listen in. Also, after Shabbat was over, the Rebbe held another farbrengen, and this time the chasidim in Israel got to hear it live.

Afterwards we heard that the Rebbe was pleased with the broadcast, and that he even mentioned to one of his secretaries that he was wondering why it hadn’t been done before. So, we decided to make these live broadcasts on a regular basis.

The initial setup was very simple. An Israeli student named Shmuel (Mulik) Rivkin, who had some engineering know-how, opened up the mouthpiece of the telephone and connected the wires to the earphones of a tape recorder, which gave us the ability to broadcast.

The next time the Rebbe held a farbrengen, we pulled wires from all the offices in the nearby building to create not just one but four or five phone lines. Again, we connected the wires from the telephones to the tape recorder and this time broadcast to several locations.

So we thought we had a system. But when we tried connecting ten phone lines to the tape recorder, it caught fire. And that’s how we learned what we could and could not do.

As I mentioned, I was involved because it was all happening in my room, but I was just a yeshivah student with no knowledge of technology. Nonetheless, just as G-d graced Betzalel with the technical skills to build the Tabernacle while the Israelites wandered in the desert, so too He gave me the wherewithal to take this project forward.

After Mulik left, I started to study how a telephone works and I learned a great deal, mostly by trial and error. Little by little – with the help of others, including Yonason Hackner, Yossel Kazen, Eli Winsbacher and Shmuel Goldman – I was able to develop a very sophisticated system that was not available anywhere; you couldn’t buy such a thing if you tried. Representatives of many companies came to see it and they couldn’t believe it was home-made. It had 420 phone lines and gave us the ability to broadcast to 600 locations around the globe. Originally, we called it LCC for Lubavitch Communication Center, but then we added on the official-sounding W to be like all radio stations and became WLCC, the World Lubavitch Communication Center.

After each broadcast, we sent a report to the Rebbe, telling him the locations we had reached, and after a while, the Rebbe was asking for the report even before we had a chance to deliver it. People even saw the Rebbe scanning a collection of these reports when he was praying at the resting place of the Previous Rebbe before Rosh Hashanah, which showed how important this project was to him.

Also, in subsequent farbrengens, the Rebbe mentioned several times that the event was being broadcast live and uniting people across the whole world, so we knew he was pleased with our efforts. I recall once he said that just as gold, which has many uses, was really created for Temple service, so too, broadcast technology has many uses, but was really created to spread Torah.

The reception from far-flung places was very positive. People asked us to add more lines, and the Rebbe directed that they contribute funds since expanding the system and broadcasting was costly.

To broadcast just one farbrengen to Israel cost at the time over a thousand dollars, which would be equal to almost seven thousand dollars today. Every broadcast involved at least half a dozen people. One was in charge of the microphone downstairs, making sure that it was picking up the Rebbe’s talk clearly. Another one was in charge of the PA system. Another one was in charge of the audio recording, for every one of the Rebbe’s talks was also recorded, and even by modern standards, these tapes are of good quality and still being listened to today. When we eventually added in video, we needed people to take care of that. So it was labor-intensive.

We also put the Rebbe on the radio in New York, as many chasidim wanted to hear him who could not attend the farbrengens – for example, mothers of small children. The radio broadcasts proved especially useful after the Rebbe suffered his heart attack in 1977. The following evening, he wanted to speak to reassure everyone, and I was asked to run a microphone from his room to the PA system. After that, the Rebbe ended up speaking from his room via radio every week following Shabbat, until his doctors allowed him to resume his normal schedule of farbrengens from the synagogue.

Initially, we broadcast only to major Chabad centers and yeshivahs, but eventually the network covered the world. For example, we broadcast to London, and London in turn broadcast to all of Europe, from Amsterdam to Zurich. We broadcast to Venezuela and from there we reached Brazil and Argentina. Eventually, we reached every place where there is a Chabad presence.

The Rebbe sent his emissaries to all corners of the globe to change the world, but he also wanted to empower them and keep them close and united. And the live broadcasts of his talks at the farbrengens helped him do that.