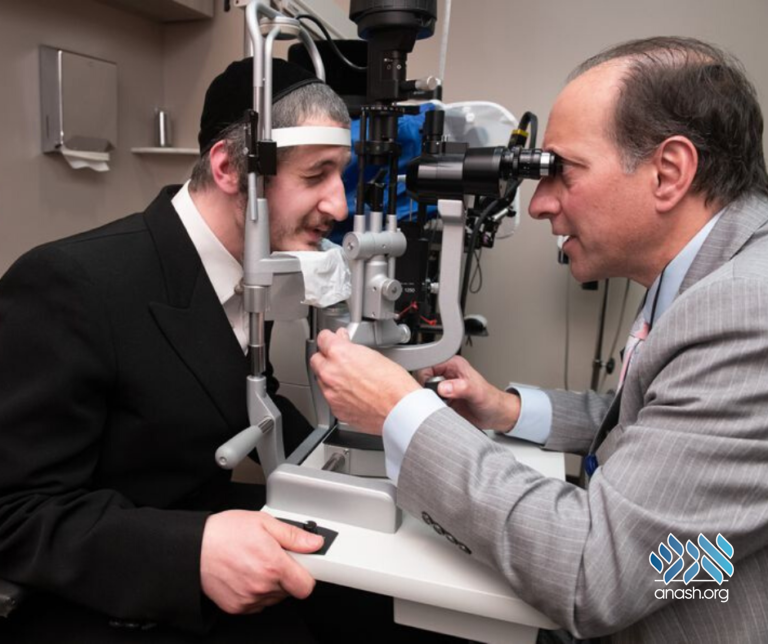 (VosIzNeias) — When Yosef Goldstein suffered a knife accident that immediately made everything go black in one eye, he didn’t know if he would ever see again out of two eyes. But in what is being described as a medical miracle, he now has hope.

Yosef, a 29-year-old father of 6, works as a Mashgiach in a meat processing plant in Sunset Park. Part of his job is the sensitive work of removing small parts from the animal in order for it to be Kosher. The knives used for these procedures are extremely sharp and must be handled with care.

On April 29, Yosef was lifting a larger piece of meat than usual. He slipped backwards under the unexpected weight, which caused the knife to stab him in the left eye.

“I knew right away it was damaged,” Yosef told the Daily News. “Everything went black like an old TV. “I didn’t know if I would see again.”

After inquiring with his Rabbi for guidance, Yosef went to visit Dr. Ronald Gentile, director of the Ocular Trauma Service at the New York Eye and Ear Infirmary of Mount Sinai.

While others had no confidence that the eye could be fixed, Dr. Gentile felt differently.

“When I saw him, I knew there was a chance to do something because I knew his optic nerve wasn’t cut and he could see light,” Gentile said. “It’s about knowing which millimeters count and which millimeters don’t.”

Dr. Gentile went to work, performing several surgeries. After the first surgery, which took place just 10 days after the accident, Yosef already was able to make out the shapes of his individual fingers.

“I didn’t think this eye would survive. This case is probably the biggest surprise I’ve seen from a patient,” said Dr. Richard Koplin, who founded the Ocular Trauma Service 30 years ago.

Yosef says his biggest relief is to once again be able to keep an eye on his 6 children, especially his youngest. “It’s terrific, but you’ve got to watch him,” he chuckled.