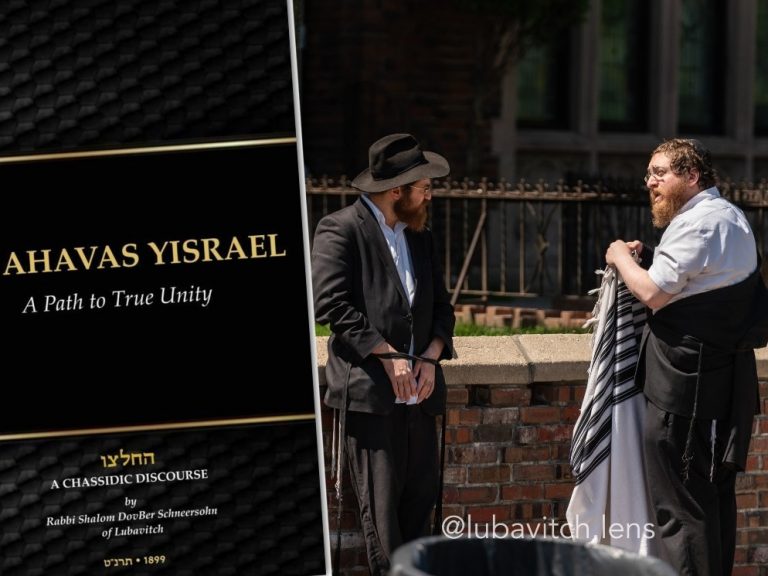 In time for the Three Weeks, a period during which the Rebbe has always encouraged us to add in Ahavas Yisroel, Sichos in English has republished the original English-only version of Heicholtzu

It is impossible to overstate the importance attached by the Rebbe to the mitzvah of ahavas Yisroel. It was a fundamental theme in the first maamar Basi Legani, and part of the Rebbe’s “mission statement,” defined as one of the essential “three loves”.

The Rebbe added Ahavas Yisroel to the list of his Ten Mivtzoim in 5736 (1976), and promoted and spoke about it extensively. In the very last farbrengen, on Shabbos Parshas Vayakhel 5752 (1992), the Rebbe expounded upon the concept of unity and exhorted us to increase in ahavas Yisroel in order to bring the Geulah.

The Rebbe would frequently instruct individuals to study the maamar Heicholtzu and pay heed to its message. In 5748 (1987), the Rebbe had the maamar reprinted and personally distributed it to thousands, emphasizing that the purpose was for it to be studied. In that same year, Sichos in English published a translation of the maamar in English, guided by many instructive directives from the Rebbe.

Now, during the Three Weeks, a period during which the Rebbe has always encouraged us to add in Ahavas Yisroel, is surely a most appropriate time to study this foundational maamar and endeavor to apply it in our lives. After having been out of print for many years, and as an updated Hebrew-English edition is being published in installments, the original English-only version of Heicholtzu is once again available. Titled “On Ahavas Yisroel”, the book was reprinted by the Aleph Institute for the benefit of Jewish men and women in limited and isolated environments. By Hashgocha Protis, it arrived from the printer just prior to the Three Weeks.

Sichos in English is pleased to offer a one-time opportunity to purchase a limited-edition copy of Heicholtzu in English today for the very low price of $6 only.
Buy 10 for $4!

May our study and efforts to increase in ahavas Yisroel serve to nullify the reason for this long golus and usher in the Geulah Shleima now, transforming these Three Weeks to days of joy.