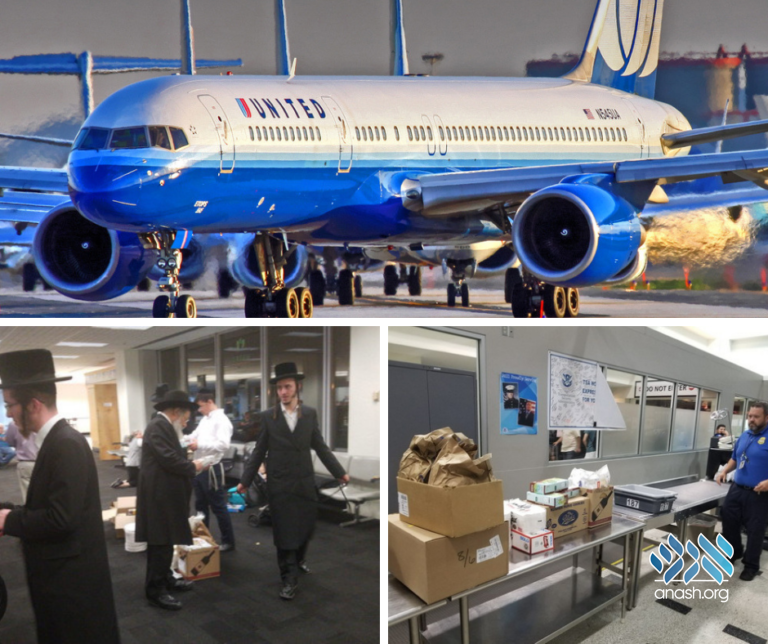 A few hours ago a DansDeals member posted that United was diverting flight 85 from Tel Aviv to Cleveland due to weather in Newark.

It’s probably the first 787-10 Dreamliner to ever land in Cleveland!

At the time United said that the flight would only be in Cleveland until 7:34pm and that passengers would remain on the airplane.

At 8:20pm United updated the new departure time from Cleveland to Newark to 12:45am and word came out that the passengers would deboard the plane.

I tweeted out asking if any DansDeals readers were on the flight and several people from the flight responded. Some were hungry. Some weren’t able to get in contact with relatives on the plane. Some just wanted to get home already.

I posted on a Cleveland Jewish Facebook group to see if anyone was able to coordinate a response and some people reached to the Cleveland Police Department asking to see how they could get food to the passengers. However the police department said that nobody was in distress, so it would not be possible to bring food past security.

I figured that I’d have better luck at the airport than trying to arrange for permission away from the airport, so I sprung into action. (The same advice applies when your flight is delayed or cancelled, it’s typically easier to fix things and get moved onto another carrier at the airport rather than over the phone.)

I called our local kosher pizza shops to try to order a bunch of pies to bring to the airport, but this is Cleveland and they had already closed for the night.

My wife Mimi suggested that I run to Trader Joe’s, so I hopped in the car and made it there as they were closing their doors at 9pm to pick up several cases of Pas Yisroel french rolls and chocolate babkas. My fellow Chabad of Beachwood council member Dr. Shmulie Margolin called Ohio Kosher and arranged for Cholov Yisroel sliced cheese, cookies, and other snacks. I picked up Shmulie, we scrubbed our council meeting, and drove to the airport.

I called United Global Services for help getting through TSA, but nobody in the Cleveland airport answered the phone, so they said to just ask at the airport for a gate pass.

I tried tweeting United, but didn’t get a response right away.

@United Driving to the airport to get kosher food to hungry passengers on diverted flight 85 in CLE. Will I be able to get through security at this time of day

We got to the airport and they made a PA announcement that TSA would close for the night in just 4 minutes!

I messaged some of the passengers who reached out to me, but they were told if they left security they would not allowed back in again for the night.

I ran to the United desk and asked for a gate pass, but the agent said that is against their policy.

I told her that there were dozens of hungry passengers on the diverted flight who only ate kosher food and that I had kosher food for them, but the agent refused to help. Getting worked up I implored her that it was United that diverted these now hungry passengers and that she ought to be helping me, but she threw her hands up and asked me to step away from the counter. I asked for a supervisor but she emphatically said that I could not speak to one.

It’s one of those scenarios that I advise readers to take a video of, but in the heat of the moment it’s all too easy to forget that rule. In the heat of the moment I was just so surprised that the agent was refusing to help get to to United’s own hungry passengers. If you’re ever in a situation with an airline, always remember to start recording first!

Alas there were no more flights going out, so I also couldn’t just buy a refundable ticket to get through security.

I ran back to the closing TSA checkpoint and found a girl from the flight who had left security earlier to meetup with her parents, who live in Cleveland. She had to fly back to Newark and was about to go through security when I asked if she could bring the food with her. With many boxes of food and utensils that would be a tall order, but TSA agent Rob allowed us to bring the boxes and put it directly onto the belt.

The other passengers who had contacted me were waiting for the food on the other side of security and were able to help get the food to the rest of the diverted passengers.

Thankfully we got them some food in the nick of time, kudos to the TSA for helping us get the food through to the passengers and to Dr. Shmulie Margolin and Ohio Kosher for helping with the food.

I feel privileged to have a network where I was able to instantly connect with the affected passengers and am happy that I was able to make their travel slightly less painful. Hopefully they get back home tonight!

I wish that there would be a nonstop flight from Tel Aviv to Cleveland, but I have a feeling that this will be last one for a while

TSA agent Rob was a great help in getting the food through:

Made it to the other side!

Helping get the food from security to the passengers just as TSA was closing:

A scene not seen too often in CLE:

Safe travels to all!

Update: UA85 finally made it to Newark at 3:58am, nearly 11 hours behind schedule.