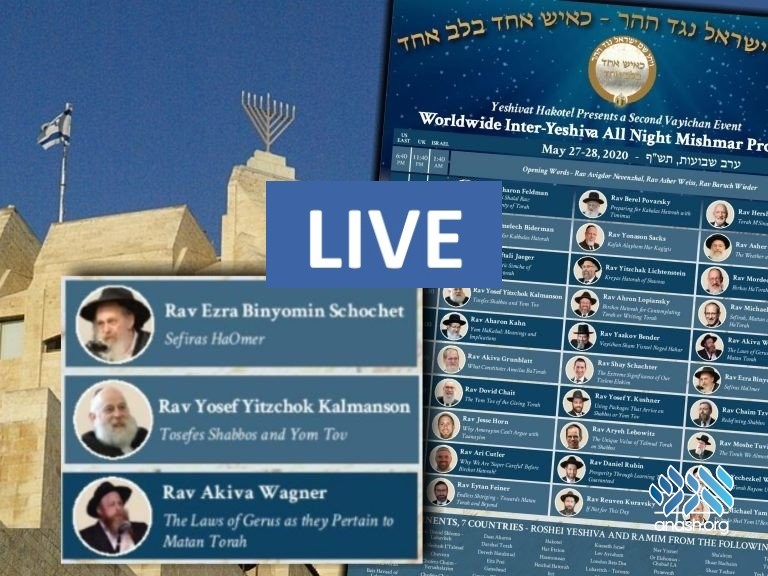 An all-night Mishmar learning program arranged by Yeshivat Hakotel will feature tens of rabbonim and roshei yesivah from all sectors. At the last minute, three leading Lubavitcher roshei yeshiva were added to the list. How did this come about?

Yeshivat Hakotel, a yeshiva in Yerushalayim only steps away from the Kossel Hama’aravi, has been utilizing the coronavirus closures to promote Torah learning in a way that has never been done before.

In the spirit of achdus, they arranged prominent rabbonim from all sectors and locations to give shiurim online. The program, arranged by Rabbi Reuven Taragin, included Litvishe, Chassidishe, Modern Orthodox, Mizrachi and others. The first such event was held Sunday with much success.

A second event was planned for this Wednesday and Thursday, with many roshei yeshivos and prominent rabbonim. But then Shua Mermelstein, a former Yale student, and son of a prominent Yeshivat Hakotel supporter, mentioned the program to Rabbi Meir Chaim Posner of Chabad Yale.

“I asked him who was joining, and he told me about the rabbonim representing almost every faction in Yiddishkeit,” Rabbi Posner told Anash.org. “I inquired if any Lubavitcher rabbonim or roshei yeshivos would be joining, and he admitted that they had overlooked that.”

The two began working on having a Lubavitch representation as well, and called three of Chabad’s most prominent roshei yeshiva. Harav Ezra Schochet, rosh yeshiva of YOEC in Los Angeles, Harav Yosef Yitzchak Kalmenson, rosh yeshiva of New Haven yeshiva, and Harav Akiva Wagner, rosh yeshiva of Toronto yeshiva were contacted and agreed to join the long list of speakers.

Although the schedule was planned weeks ago, those involved worked hard to rearrange the schedule and allow time for these additional shiurim.

“We wanted the beautiful achdus project to encompass Lubavitch as well, and, baruch Hashem, we succeeded in making it happen,” they said.

Harav Schochet will be delivering a shiur on the topic of Sefiras Ha’omer, Harav Kalmenson’s shiur will address Tosfos Shabbos and Yom Tov and Harav Wagner will speak about the laws of geirus as they pretain to Matan Torah.

The shiurim will be broadcast on vayichan.com/mishmar and on Anash.org.