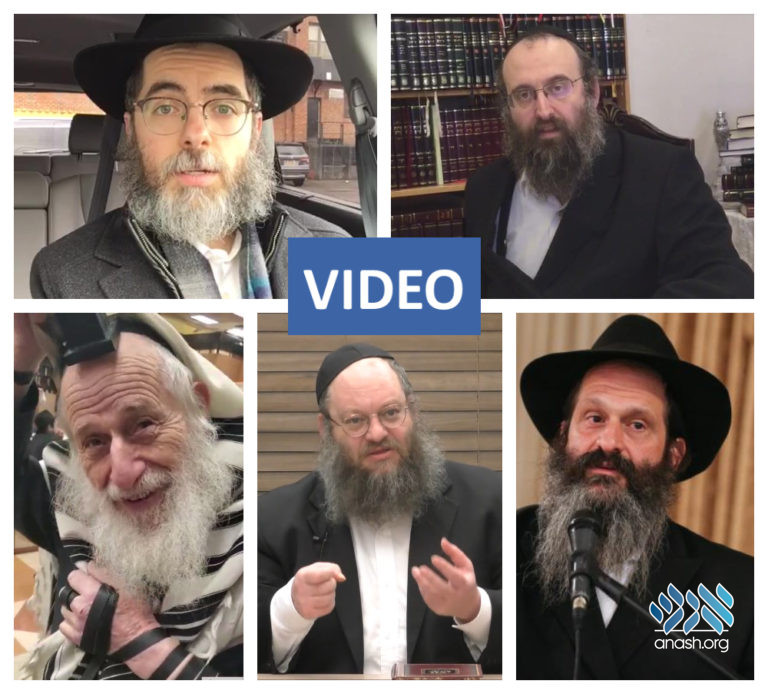 A kind Yid gave me a ride home last Erev Shabbos. I thanked him for the ride, and he asked me what I think about the matzav going on. The answer seemed simple and clear enough.

I pointed out to him what it says in Shaar Habitachon, chapter 4. Rabbainu Bachya clearly lists how to have Bitachoin in actual life circumstances, such as Parnosoh, health and Illness R”L.

This also applies to [matters of] health and illness. [First Step] A person should place his trust in the Creator in this regard.

[Second Step] and be Mishtadel in continued health in the causes which are natural in this, and push away illness in the customary way. As the Creator may He be exalted, has commanded “Verapoi Yerapeh” without placing any trust in the [natural] causes of health and illness, that that they help or harm except with Permission of the creator.

When the person will trust in the creator, He will cure him from his illness by [Natural] causes or without [natural ] causes as it says “He will send his word and heals them (Tehillim 107:20)…… You also know what happened to Asa ( A Righteous king ) when he relied on the physicians, instead of trusting in Hashem – of the mussar and reprove for this, and the posuk says “He hurts, but he soothes; he wounds, but his hand heals (Iyov 5;18).

Lets understand this. Clearly, The First step of Biatchoin is crucial to the success of the Second Step because a Second Step of Hishtadlus cannot be a part of our Bitachoin in Hashem if the First Step is not acted upon first.

Being that this was the Shabbos before Purim, we can see the same lesson from Megilas Esther which teaches us how the Jewish Response must be, to overcome a Gzairoh we face.

The First Step Mordechai Hatzadik did, after knowing about the mortal danger the Yidden were in, was to put on a sackcloth and ashes. He went into the streets to publicize to all Yidden the need to Return to Hashem. Faced with danger,  the first thing a Yid needs to do is to get closer and bond with Hashem, thereby removing the separation they had made through their mistaken actions in the past. The Second Step he did was to direct Queen Esther to do Hishtadlus. He directed her to go to the King and plead for her people, making a Keli B’gashmius.

The Rebbe Points out that Queen Esther teaches us the same Two steps. The First Step she made was to ask Mordechai Hatzadik to gather all Yidden together and they should fast for 3 days, not eating or drinking: (To atone for their eating and drinking by the king’s feast) . Then she would be able to do the second step, and go to the King and plead for the Yidden.

Mordechai Hatzadik and Esther Hamalka are teaching Yidden in all generations how to act in a time of Tzoroh. The first step is getting closer to Hashem through Teshuvah and Maasim Tovim with Bitachon that Hashem will protect and save us from the Tzoroh. The second step is to do Hishtadlus, a Keli Bgashmius.

As I finished my little speech, the Yid was genuinely surprised! He wondered out loud, “I thought that the first thing a Yid needs to do is “Hishtadlus”! We spoke for as long as we could, parked outside my home, with Shabbos quickly approaching, I summed it up in the following way.

Say you need cream for a rash on your hands and could heal it with cream. If you have a regular cream or a better cream that has better natural properties, which one would you use?

The Shaar Habitachon above gives us the answer; The First step is to trust Hashem that He will heal you. The Second Step is to push away the illness with the customary way. In the case of the rash, use the better cream. We follow what works best in the natural order of the world, but you do so only because Hashem commands you to do so, and you do not attribute any healing to the natural causes.

If you begin with the premise that the better cream is the healer, because it has the natural properties which heal the illness, and then you attempt to bring the Creator into the healing of the cream, that won’t work because the Creator is infinitely greater and doesn’t fit into the bottle of cream!

However, when you do as the Torah says, you begin with coming closer to Hashem and trust Hashem will heal you. You purchase the bottle of cream because Hashem directs you to do so! Then Hashem will heal you either with nature or above the way of nature!

If the first step is Hishtadlus, then the underlying belief is that natural cause has the power to accomplish what you seek, and the trust in Hashem is trying to bring Hashem into the finite causes being done, and it doesn’t work!

However, when we begin with trusting only in Hashem, and we get closer to Hashem by doing what Hashem wants, in Torah and Mitzvos, then Hashem will give us the success we see in the actions we do, because, the actions we do are only that which Hashem wants us to do and His help is not limited in the limited causes of the world or in the Miracles Hashem will do!

A Guten Un A Freilichen Shabbos!