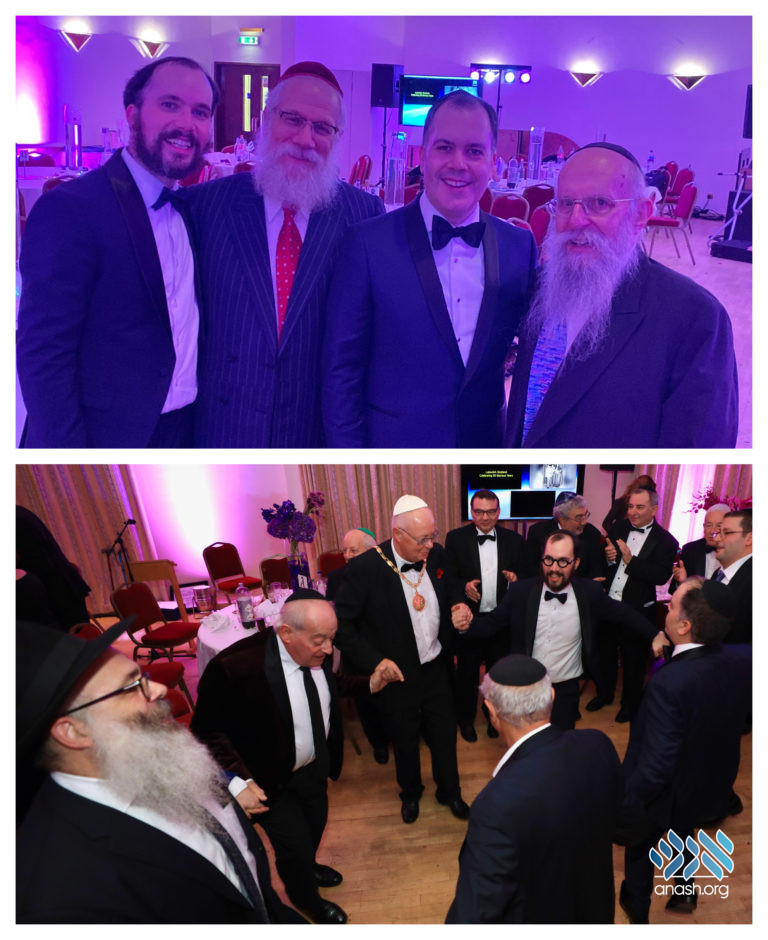 Scotland’s Senior Rabbi & Rebbetzen Chaim and Sora Jacobs who are directors of Lubavitch of Scotland have been serving as the Rebbe’s Shluchim in since 5730 and were one of the first 50 shluchim to set up a Chabad House presence in a city sent by the Rebbe.

They were also the very first British shluchim of Lubavitch UK to set up a Chabad house in a city outside London and Manchester.

The event was organized with the help of two of the Jacobs’ sons Sholom Jacobs who was dinner organizer and Rabbi Yossi Jacobs Dinner chairman.

They also organized the publication of a souvenir brochure for the event and a twenty-minute video highlighting the current high level of activity and with comments and good wishes from people who have benefitted from the work of Lubavitch in Scotland over the past 50 years.

Speakers included guest speaker Rabbi Shea Hecht who gave an inspiring address also praised the dedication of Rabbi Chaim and Sora Jacobs and made an appeal for funding for future events.

Over the past 50 years Lubavitch of Scotland, alias Rabbi Chaim and Sora Jacobs and their son Mendel have organized thousands of events and programs including a very successful Hebrew School and Bat Mitzvah Classes, a Nursery School, Summer Day Camps, the famous L’Chaim’s Kosher Restaurant and Catering, Sora’s Lunchtime Café, and numerous adult, teenage and student classes, events and Shabbos and Yom Tov Hospitality.

Throughout the past fifty years, they have been famous for welcoming to their events the entire community even if they were unable to pay for services rendered or events organized.

At Lubavitch in Scotland nobody is ever turned away due to finance.

Over the past 27 years they have been assisted by their eldest son Rabbi Mendel Jacobs who is also the founding rabbi of the famous ‘Shul in the Park’ Chabad Shul which aims to cater for those members of the community who feel more welcome in a smaller warm environment often due to social, financial or religious circumstances.

Despite meeting a very challenging financial time in 5742/1982 and wanting to leave Glasgow, they merited at the time to receive a page long handwritten letter of exceptional encouragement from the Lubavitcher Rebbe telling them and blessing them to stay in Glasgow.

However difficult it was at the time they listened to the Rebbe totally and looking back they were so happy that they did so. (The letter is printed in Likutei Sichos volume 23 page 476-477).

During the evening Sora praised and thanked the dedication and mesirus nefesh of all their children who often had to forgo many social and educational extras while growing up in their younger years in Glasgow with limited social friends and homeschooling one to one education.

During the evening musical entertainment was provided by Benny Weiss of Manchester and much singing and dancing took place which made the occasion a real joyous memorable occasion.

Catering was provided by L’Chaim’s Kosher catering under the expertise of shlucha Sora Jacobs who organized the entire meal.