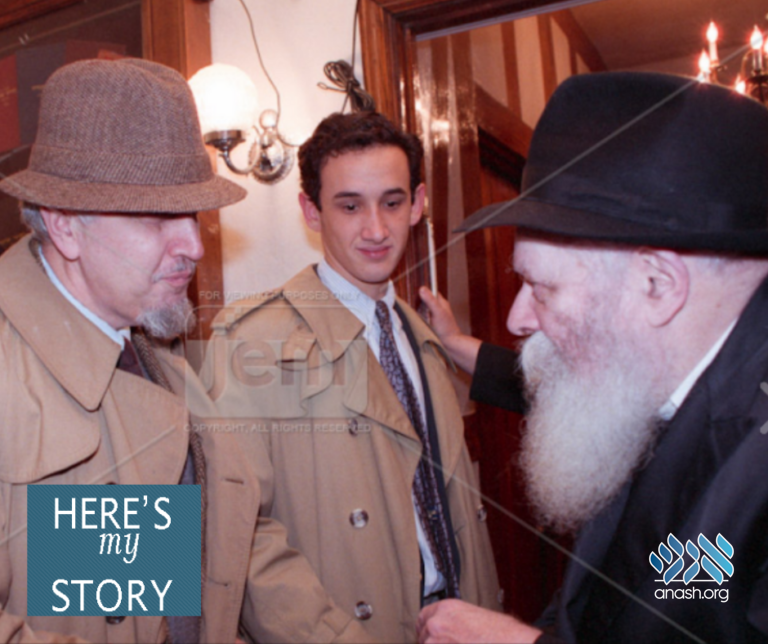 The Rebbe’s words to Mrs. Joan Zlotnick during a yechidus prevented an intermarriage 30 years later.

Mrs. Joan Zlotnick is a retired professor of English literature, a published author, and former columnist for Mishpacha magazine. She and her son Ira were interviewed in November of 2019.

When my late husband, Shmuel Yaakov – better known as Jack – was a boy, he got to know Rabbi Menachem Mendel Schneerson, who would later become the Lubavitcher Rebbe. This was in the 1940s, when my husband was a student at the Chabad yeshivah in Brooklyn and stood near him during morning prayers.

In 1963, when we got engaged, Jack brought me to the Rebbe so that we could get a blessing for our upcoming marriage. I remember feeling very nervous about the audience because Jack told me it was like visiting royalty, and he described the proper conduct of behavior in the Rebbe’s presence. I was worried that I would forget some important part of his instructions, but I needn’t have been concerned. The Rebbe did not stand on ceremony, and he made me feel very comfortable from the start. When we walked into the room, he greeted my husband with great warmth, and I was immediately struck by his graciousness. He seemed to be eager to talk to us, as if he had all the time in the world.

Today, I don’t remember everything we talked about, but I do remember that he was extremely interested in our goals – what we planned to do academically and professionally.

When I told him that I was enrolled in a Ph.D. program in English literature and was planning to teach at the college level, he asked me to do something for him: “I want you to always remember what I’m telling you now,” he said. “Over the course of your career, you will have many opportunities to help the Jewish people, and you should never miss any opportunity to do so.”

And many such opportunities did arise. I always kept an eye out for my Jewish students, and I tried to guide them as much as I could. But the one incident that I remember most vividly happened about thirty years after that meeting with the Rebbe. It was a most unusual and unexpected event. I was sitting in my office and a student of mine came to see me in tears. She explained that she’d been crying because she didn’t have her assignment ready. I assured her that she could give me the paper next week, and I commented that perhaps something else might be bothering her because she seemed so distraught.

She went on to tell me that her boyfriend’s brother had recently been killed in a motorcycle accident abroad. And when I heard the story, I realized that I was acquainted with this family and had even attended the shiva for this boy.

She also said she had been dating the brother for several years and that she wasn’t Jewish.

It’s hard to describe how I felt at that moment. I knew that this couldn’t have happened by coincidence – that my student should suddenly come to me to talk about this and that I should know the people involved. That is when I remembered what the Rebbe had said. And I knew what I had to do.

After offering my condolences, I said to her, “This boy comes from an Orthodox Jewish family, and now he’s the sole surviving child. To tell you the truth, I don’t believe that he will ever marry you. He won’t do this to his parents.”

I pointed out that she’d already spent several years with him, and who knows how many more years she might spend with him before he finally broke things off? Since it was likely he would never marry her, she was just throwing away her best years.

The girl listened to what I said and, when she was leaving, told me, “I respect you, and I value your opinion. I think you’re right – I need to break off this relationship.”

When she was gone, I thought about what I had done. Clearly, I had stepped out of my professorial role. I felt uncomfortable about this, yet I had been compelled to do it. Since she had come to me on this day and I had an opportunity to make a difference and help both of them, I could not look the other way.

Driving home, I was extraordinarily anxious, knowing that I had to call the parents of the boy and tell them what had happened. But, when I did so, they were very grateful. About a year later, their son married a Jewish girl. So, as it turned out, the advice the Rebbe had given thirty years earlier had an incredible impact on me and on the lives of these young people.

But that was not the only time that the Rebbe reached across the years to touch our family’s life.

When our son, Ira, was nineteen, my husband took him to the Rebbe for a blessing. This was in the fall of 1989 – to be exact, on November 5th. Ira had just returned from studying at Yeshivat HaKotel in Israel, and Jack proposed that they go to see the Rebbe on a Sunday, when he was distributing dollars to be given to charity.

The Rebbe recognized Jack instantly and proceeded to have a lengthy chat with him in Yiddish, which Ira didn’t understand, and to give him several dollars. At some point, he pointed to Ira and asked, “Does he help you out?” After Jack responded that Ira was a good son, the Rebbe handed Ira an extra dollar, adding, “This is for the son – that you should help your father.”

Ira didn’t know what to make of that statement, which Jack translated after they left, and he didn’t give it much thought.

When they got home, Jack put the dollar in an envelope marked with the date and told Ira to put the dollar in his wallet. Ira did so, and he promised Jack that he would always keep it with him. After that, he forgot all about the dollar; even as he passed the envelope from worn-out wallet to new wallet, he didn’t attach any particular significance to it.

As the years passed, Jack developed dementia and went to live in a facility, where Ira often visited and helped him in any way he could. One day in 2009, during a visit, Ira began rifling through his wallet for pictures of his children to show to Jack. And he came across the envelope with the dollar from the Rebbe. The date on the envelope was exactly twenty years ago – to the day!

On that very day, the Rebbe had told him to help his father, and this is exactly what he was doing twenty years later.