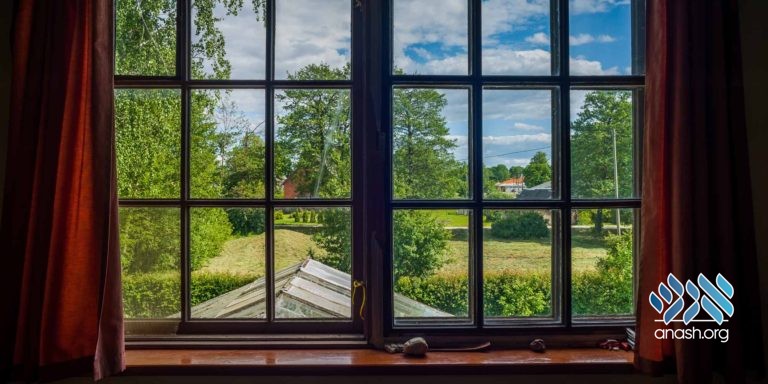 During the farbrengen of Simchas Torah 5726, the Rebbe shared the content of a farbrengen of the Frierdige Rebbe that had taken place 30 years earlier (5696). On that occasion, the Frierdige Rebbe said that chassidim are complaining about the fact that their avodas Hashem is not affecting them. Once, learning Torah, davening and farbrenging would have a noticeable impact on the person, and today, they don’t seem to have any impact.

“When I was a young child” – the Frierdige related (and the Rebbe added, that the fact that the Frierdige Rebbe shared such a personal story, after having already illustrated the idea with a previous story, is an indication of how important it was to him to clarify this idea) – “I used to have a habit, during cheder, of looking out of the windows, to watch what was going on outside”. [He added – that it was not even as if there was anything much to see in Lubavitch].

His melamed, the Rashbatz, wanted to impress upon him to change his behavior, so he said to him “It is better to stand outside, and look inside, than to stand inside and look outside!”

I think that, perhaps, the key to understanding this story can be via another story:

One year, on the night of Simchas Torah, R’ Mendel Horodoker locked himself in his room, and refused to come out for Atoh horeiso. The chassidim were eager to get started with the ceremony, so that they could get started with hakofos. But, of course, to start without their Rebbe was unthinkable. And R’ Mendel couldn’t be convinced to change his mind.

Seeing no way out of the stalemate, they turned to the Alter Rebbe (who, at the time, viewed himself as a chosid of R’ Mendel) to intervene. The Alter Rebbe turned to R’ Mendel, and asked for the grounds for his refusal to come to hakofos. R’ Mendel explained: “I have grasped 40 new interpretations in Atoh horeisoh, that represent very lofty levels in avodas Hashem. Since I don’t see myself as having attained those levels, I feel unworthy to recite the Atoh horeiso!”

The Alter Rebbe, however, ruled against his argument, saying “There is both a common-sense argument and a story that refutes your reasoning. The argument is – if you had reached the level represented in those 40 interpretations, you would, undoubtedly, then grasp even deeper meaning and symbolism to Atoh horeiso, that would result in your feeling even more unworthy”!

This fundamental idea should help clarify the first story as well: The more one understands, the deeper one delves, the more he is bound to sense his own inferiority and inadequacy. If someone, instead, remains shallow and superficial, he is more likely to find no fault with his own state of Yiddishkeit.

[In the words of Hayom yom: “He who is, himself, “nidereg un grob” (coarse and lowly), is bound to not sense his own lowliness”].

So the story with the Rashbatz is, in fact, very precise. There are, indeed, just two possibilities. One can be focussing on the outside. By looking towards outside, he will, inevitably, be comparing (and/or contrasting) himself with what he sees outside. And he is bound to conclude that he is not doing that bad at all, – he, himself, is “inside”.

If, on the other hand, one chooses the approach of “looking inside” – towards what is more real and more pnimiyus – , of striving towards what is higher, more spiritual and loftier, then he is risking coming to the blunt realization of how distant and removed from his goal he still is. In other words, he will come to see himself as being – outside.

The choices are clear: You can focus on the world, on the outside, on the superficiality, and have the benefit of being able to feel good about yourself, of feeling that you’re inside (in fact, by comparison, you’re actually not doing so bad at all, you’re the chosid, you’re the pnimi etc.). Or you can focus on the ideal chosid, on serving Hashem with neshomo, with pnimiyus, which may result in your coming to the (possibly discouraging) conclusion that you have a long way to go.

But this is something that we can go about in two different ways. One way is the superficial way. We can judge ourselves using the measuring stick from “outside”. When our focus is on the standards of the outside world, chances are that we’ll find that we’re not doing so bad (after all, my Pesach hotel had a better hashgocho, more shiurim, and a heimishe entertainer…).

Or, we can focus on what it really means to be a chosid, and to serve the Eibishter with a pnimiyus, to think about the ideal manner of davening, about a deeper understanding of the לך אמר לבי בקשו פני את פניך ה’ אבקש of Ellul and Tishrei. Which may leave us pessimistic, disillusioned and very discouraged. It may leave us feeling hopelessly “outside”.

But we need to remember: “it’s better, much better, tzu shtein in droisen un kucken iniveinig, vi shtein iniveinig un kucken in droisen”! Because as long as we are looking towards and focusing on “inside”, we are not giving up on our chance to eventually get there. Moreover, the mere fact that we’re looking towards the “inside”, although it doesn’t help for feeling positive about where we’re holding, causes us, in some sense, to be inside, and even more than we would be otherwise. [As we all know the Torah of the Baal Shem Tov, who’s yom huledes we just celebrated, that wherever our thoughts and yearning are is where we truly are].

This is the time of the year when everyone thinks a bit about change, about improving and becoming better Yidden and better chassidim and better temimim. The challenge often is that if we aim (too) high, if we try to be really serious and ambitious, we risk feeling very far from our goal and getting discouraged.

But we need to bear in mind: We are better off being outside and looking inside. We need to keep our focus and our goal on being and living as a genuine pnimiyus’dige chosid. And by persistently looking inside, we are reassured that ultimately we will, indeed, find ourselves inside!