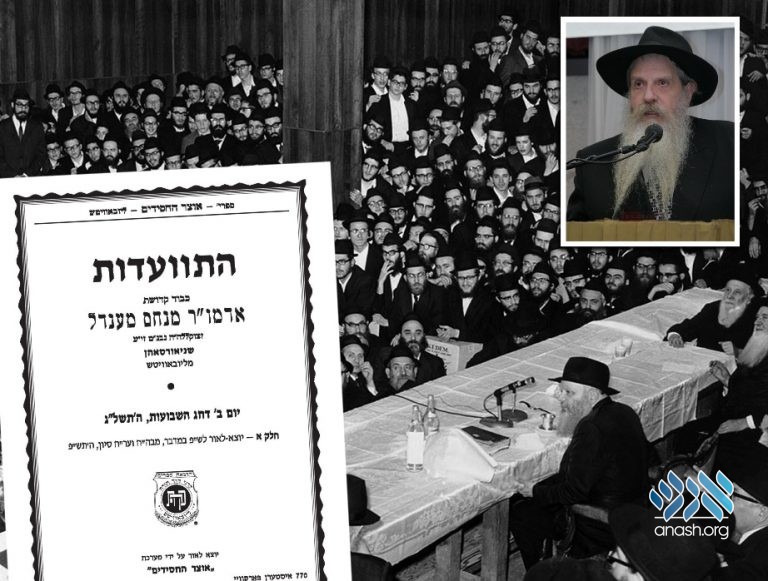 The Rebbe’s farbrengen of Shavuos 5733 was long though to be lost o history. Recently, the notes of Rabbi Zev Katz transcribing the farbrengen were uncovered, and Lahak Hanachos has printed the farbrengen in his merit.

In honor of Shavuos, Lahak Hanochos has published a Hanachah of the Rebbe’s Shavuos farbrengen in 5733-1973 including a significant portion of this Farbrengen which has never been published before.

At that Farbrengen forty seven years ago, Rabbi Zev Katz had recited Havdalah as soon as Yom Tov was over, and had written the Rebbe’s words in shorthand with a paper and pen concealed at his place before Yom Tov (this was his custom for many years at the Rebbe’s Yom Tov farbrengens, and many Farbrengens have been recovered thanks to his efforts). Only recently, this Hanacha was discovered in his archives.

The publication and study of these Sichos is dedicated to Rabbi Katz’s merit (Reb Zev Yechezkel Hakohen ben Mindel) for a speedy Refuah Sheleimah. The first portion is presented here for Shabbos Mevorchim, and the second portion will be published for Shavuos.