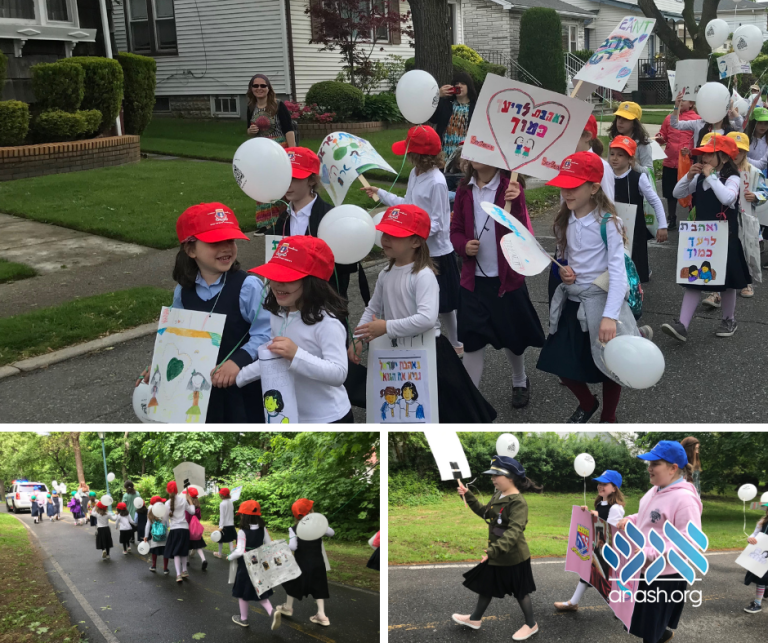 History was made in Lynbrook, Long Island!  For the first time ever, the town of Lynbrook was graced with a beautiful display of Jewish pride and unity – its first ever Lag B’omer Parade!

Cheder Chabad Girls of Long Island is a warm, chassidishe school located in Lynbrook, Long Island, and this year decided to arrange its own local Lag B’omer parade. Mrs. Unsdorfer, the school’s principal, made sure permits were arranged, and with the Rebbe’s brochos, and the work of the Tzivos Hashem Base Commander, all the details came together. The students and staff were all very excited in anticipation of Lynbrook’s first ever Lag B’omer parade! In the days leading up to Lag B’omer, the girls all did their part to prepare for the parade, creating banners in the theme of Ahavas Yisroel and practicing the psukim.

As the big morning arrived, students could be seen getting ready with their special caps – based on their Tzivos Hashem rank – and balloons, holding their banners. Although the forecast was ominous, the rain stopped just in time for the rally and parade. With their banners and balloons, the girls lined up by rank as parents and onlookers joined. The Tzivos Hashem general, first of the school so far, was dressed in a full general outfit.

Beginning with a rally emceed by a Cheder teacher, featuring the 12 psukim led by the children, the rally was off to a great start! They then marched through the streets of Lynbrook, with a police escort, led by General Mushka Lieberman, followed by the school banner, and the proud soldiers in Tzivos Hashem, who chanted and sang all the way to the park. Proud parents also enjoyed the rally and parade.  Afterwards, the day continued with a snack, story, tzedakah and relay races. The students in 5th grade planned ideas for the relay races. Rabbi and Mrs. Shmuel Lieberman prepared a delicious barbecue lunch  sponsored by Rabbi and Mrs. Tenenboim, shluchim in Hewlett, Long Island and proud CCGLI parents, for all to enjoy. Playing at the park followed lunch, and then the girls marched back to school for a kumzitz before going home.

It was a wonderful Kiddush Hashem, and surely brought much nachas to Rashbi and to the Rebbe!