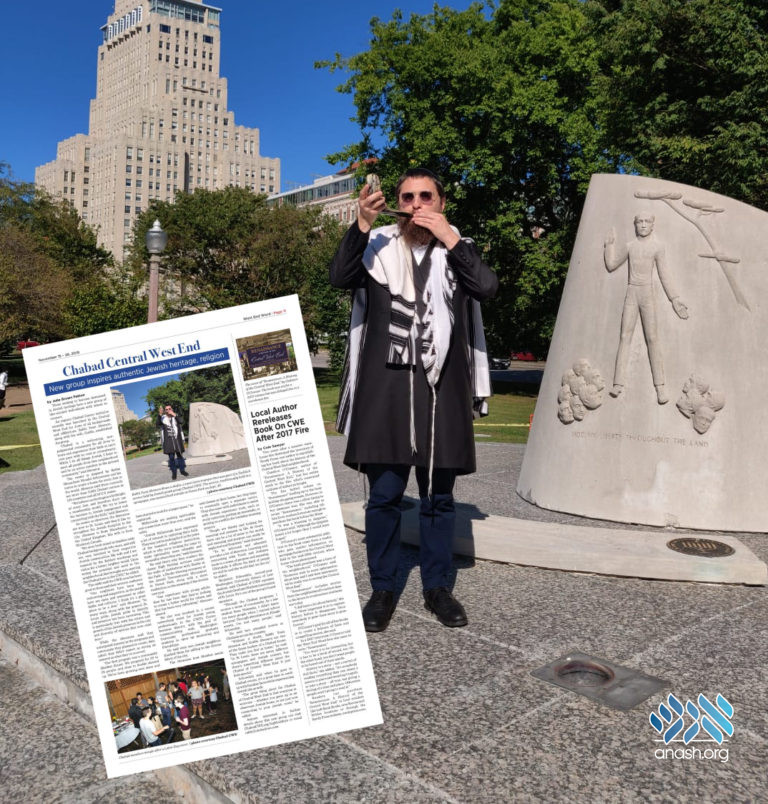 Rabbi Yossi and Goldie Abenson arrived in Missouri a short year ago, yet their influence on the city is keenly felt.

In the first part of this century, the city of S. Louis, Missouri was mostly known for segregation and for having one of the worst air-pollution problems in the USA. Thankfully, the city underwent major changes and is now known for its hospitals, research universities and for hosting nine Fortune 500 companies.

The city’s ‘comeback’ is especially felt in the Central West End community, where many of the hospitals are located. Among them are the prestigious Washington University Medical Center and the nationally recognized Barnes-Jewish Hospital.

In recent years, Central West End has seen the Jewish population grow exponentially. Jobs in the health and tech industries attracted many young Jewish professionals, and graduated students flocked to the area to attend its highly rated schools.

It goes without saying that a greater Jewish presence necessitates more Jewish engagement. Although Chabad has been active in S. Louis for over a century, Central West End did not yet have a center. To fill that need, Rabbi Yosef and Shiffy Landa, together with Rabbi Hershey and Chana R Novack set out to find a young couple to serve as shluchim to the area.

A few months into the search, Rabbi Landa was contacted by Rabbi Yossi Abenson, who was exploring opportunities to do exactly that.

After a few meetings and a visit to see the area first hand, Rabbi Abenson and his wife Goldie decided that Central West End was the right place for them. They immediately began working out the logistics of the move, and by Cheshvan of last year they were ready to embark on their new journey.

The response was immediate. “Residents had acutely felt the lack of Jewish infrastructure and responded very graciously,” Rabbi Abenson told Anash.org. “We were constantly approached by Jews, and even by non-Jews who were happy to finally see Chabad in the area. At our first programs, we had almost double the number of attendees that we had expected.”

Before long, the local press picked up on the new phenomenon. The West End Word, self-described as ‘the premier source for community news in the S. Louis area,’ contacted the Abensons to arrange an interview.

“We immediately agreed, knowing that this would be one of the best ways to spread awareness and reach more locals,” Rabbi Abenson said.

In the interview, the Abensons spoke about their backgrounds, Chabad’s vision, and the reception they received in the community.

“Our neighbors have been very welcoming and supportive, as the people here are open and interested in other faiths and cultures. I think it’s a great place to be a Jew,” the paper quoted. “In many ways, along with the general St. Louis pride, pride in Jewish identity has been increasing. This is particularly true with the return and growth of the Jewish presence in the city and diversity of options that now exist here.”

The article also contains words of praise for the Abensons from Chabad attendees.

Benjamin Schoenkin, second-year Washington University School of Law student told the newspaper that he had attended Chabad events throughout the country. “Without a doubt, Rabbi Yossi Abenson and Goldie Abenson are two of the finest leaders of a Chabad house. They make you feel at home,” he said. “In St Louis, there are many different synagogues and Jewish centers, but there’s something different about the Chabad of Central West End. It just feels special.”

Rabbi Abenson told Anash.org of another service they are providing. “Unfortunately, there are also many Jewish patients from around the country in area hospitals,” he said. “Chabad CWE, and the other Chabads in the area, are always on call to help any way possible, and alleviate some of the confusion that can surround hospitalization.”

“We will always be available to help all in need, though it is our foremost hope that no one should ever be in a position to need these services,” Rabbi Abenson concluded.

To donate to Chabad CWE and help them in their mission to reach every Yid, click here.