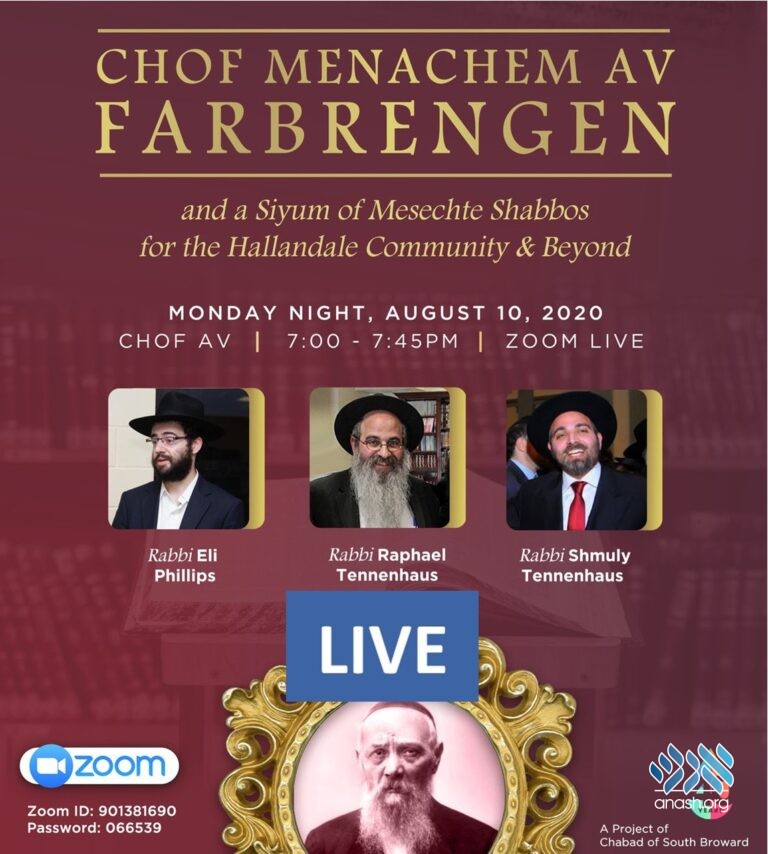 Join live now: Princeton shliach Rabbi Dovid Dubov will farbreng and hold a siyum on Masechte Shabbos with the Hallandale community and beyond.

Rabbi Dovid Dubov, Shliach in Princeton, NJ, and prolific author, will relay teachings of the Rebbe’s father at the Chof Av Hallandale Zoom Farbrengen taking place tonight at 7 PM. Rabbi Dubov recently published the latest edition of his Seforim on Reb Levik’s teachings. The Farbrengen will include a Siyum on Tractate Shabbos, with the Rebbe’s insights on the Siyum.

Congregation Levi Yitzchok-Lubavitch in Hallandale Beach, Florida, received permission from the Rebbe to name the first Chabad Shul in Broward County after the Rebbe’s father, some 40 years ago. The Congregation merited to receive the last letter ever signed by the Rebbe.

Although dated Purim Koton, 5752, the actual letter was signed by the Rebbe on 27 Adar 1, 5752, after the Rebbe went to the Mikvah and right before he went to the Ohel. It was the only letter sitting on the Rebbe’s desk at that time.

This was conveyed by Rabbi Leibel Groner, z”l, the Rebbe’s secretary, and by Rabbi Bentzion Stock שי׳, who was instrumental in getting the letter to Broward County’s first Chabad Center in time for their dinner, which was held the following Sunday.

Congregation Levi Yitzchok-Lubavitch Farbrengen in honor of Chof Av will be held at 7PM sharp on Zoom.