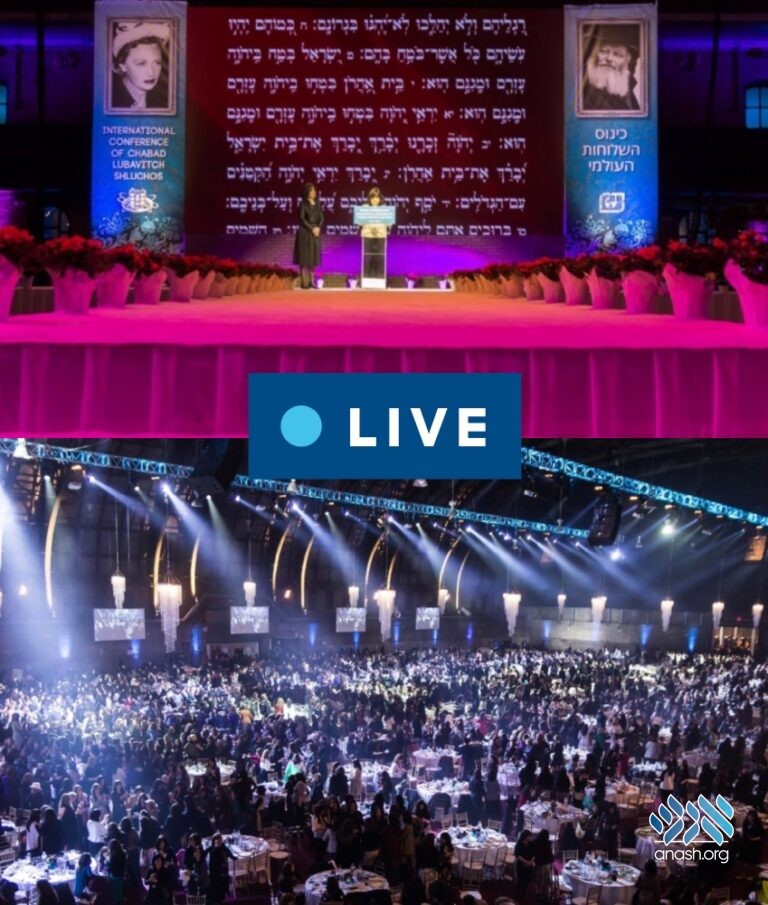 Live Sunday at 8:30 PM ET: Join Chabad-Lubavitch women emissaries and their admirers from across the globe as they pay tribute, draw inspiration and commemorate the Yahrzeit of Rebbetzin Chaya Mushka Schneerson of blessed memory, the wife of the Rebbe.

Join Chabad-Lubavitch women emissaries and their admirers from across the globe as they pay tribute, draw inspiration and commemorate the Yahrzeit of Rebbetzin Chaya Mushka Schneerson of blessed memory, the wife of the Rebbe.

A program at the International Conference of Chabad-Lubavitch Women Emissaries honoring the legacy and ongoing influence of Rebbetzin Chaya Mushka Schneerson, of righteous memory, will be broadcast worldwide Sunday, January 23 at 8:30 p.m. to 10 p.m., corresponding to the anniversary of the Rebbetzin’s passing on 22 Shevat, which begins Sunday at nightfall.

An international audience will join the thousands of leaders and role models in communities around the globe who are joining together this week—mostly online—for the conference (Kinus Hashluchos in Hebrew), which encompasses four days of camaraderie, bonding, learning, and inspiration as they reconnect with their sister emissaries on six continents and more than 100 countries and territories.

The program will begin with the reciting of Psalms led by Chaya Chourke of Tel Aviv, followed by an introduction to the evening by Rabbi Moshe Kotlarksy, vice chairman of Merkos L’Inyonei Chinuch, the educational arm of the Chabad-Lubavitch movement, who will speak about how the emissaries are connected to the Rebbetzin in all that they do.

A video tribute to the Rebbetzin will be followed by a talk by Chanie Krasnianki of New York, N.Y. who will give an overview of how one particular sicha (address) by the Rebbe, Rabbi Menachem M. Schneerson, of righteous memory, sets the tone for our unique times. Brocha Sapochkinsky of Westlake Village, Calif., will talk about the women emissaries of our generation and Chanie Rosenblum of Pittsburgh will detail the “Love, Warmth and Joy of Yiddishkeit.” There will be musical interludes throughout the program.

The thousands of women leaders taking part in the conference are at the forefront of Chabad’s staggering growth, including over the course of the coronavirus pandemic, which saw more than $100 million raised in Chabad capital campaigns across the country. Those figures dovetail with the findings of the Pew Research Center’s 2021 study of Jewish American life that two in five Jewish adults (38 percent, or 2.2 million people) report engaging with Chabad-Lubavitch. The Pew data also shows that Chabad attracts a diverse population—more than half of all participants personally identify as Reform, Conservative or unaffiliated.

SHLUCHOS CONNECTED TO THE REBBETZIN
Rabbi Moshe Kotlarsky – Brooklyn, NY
Vice-Chairman Of Merkos Li’inyonei Chinuch
Tribute To The Rebbetzin
A Video Presentation
Musical Farbrengen: A Child I Was

A Glimpse Into The Sicha Of Chof Beis Shvat 5752
That Set The Tone For Our Unique Times
Mrs. Chanie Krasnianski – New York, NY

THE CALL OF THE HOUR