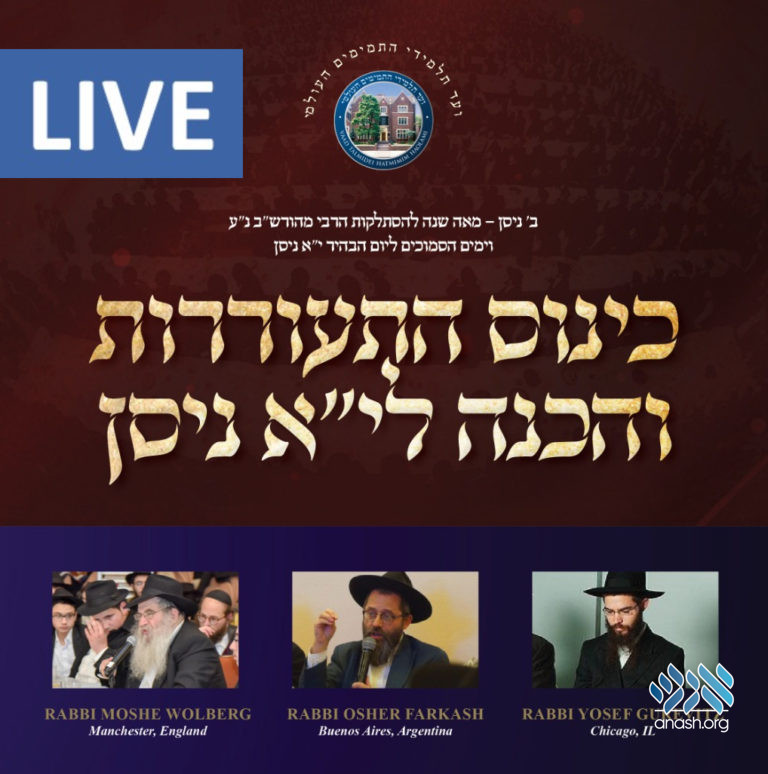 Join Live at 7:00 PM EST: The Vaad Talmidei HaTmimim is organizing a virtual kinus marking 100 years since the histalkus of the Rebbe Rashab on Beis Nissan 5680 and in preparation for Yud Alef Nissan, the Rebbe’s 118th birthday.

The Vaad HaTmimim is organizing a virtual kinus this Beis Nissan, commemorating 100 years since the Rebbe Rashab’s Yartzeit.

The kinus will include a video of the Rebbe and divrei hisorerus by mashpiim Rabbi Moshe Wolberg of Kfar Chabad Yeshiva, Rabbi Osher Farkash of Buenos Aires Yeshiva and Rabbi Yosef Gurevitch of Chicago Mesivta.

The kinus will begin Thursday at 7 PM and will be streamed live at Chabad.org/vaad.

During the kinus, a new project will be launched: to watch and relive “Yud Alef Nissan farbrengens with the Rebbe.”

Every day, during the week leading up to the Rebbe’s birthday, a sicha from a different year’s Yud Alef Nissan farbrengen will be shown, along with memories shared by a Chossid who was present at that specific farbrengen.