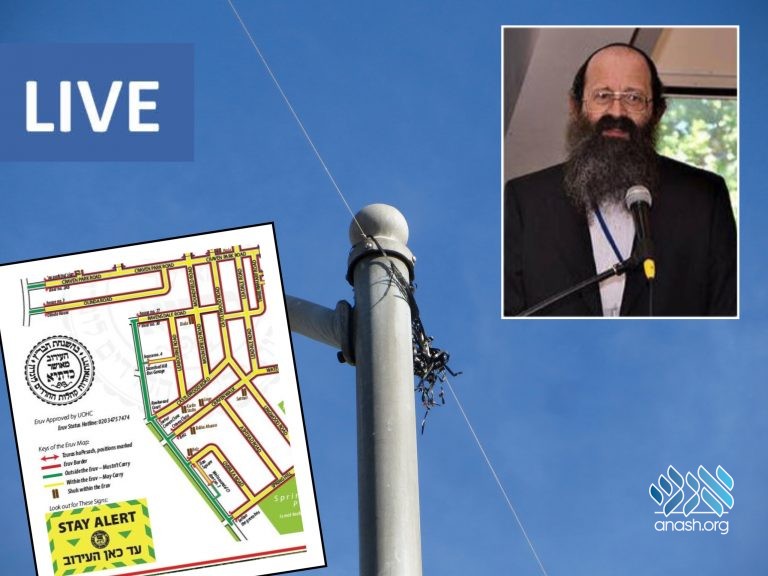 Join live at 3:30 PM EDT: In light of recent developments related to city Eruvin, Dayan Rabbi Levi Yitzchak Raskin will deliver a shiur on the Alter Rebbe’s views on constructing a city Eruv.

For the first time in history, an Eruv has been erected in London, UK, with the approval of the Union of Orthodox Hebrew Congregations (UOHC/Kedassia).

In light of these developments, Dayan Rabbi Levi Yitzchak Raskin from Stamford Hill, UK, will deliver an overview shiur on the Alter Rebbe’s view on constructing a city Eruv. Rabbi Raskin will also discuss the Halachos pertinent to anyone living in a community with an Eruv.

The shiur has been rescheduled for later today. The updated time will be posted when available.

It should be noted that the Rebbe himself expressed opposition on a number of occasions to building city eruvin. Here are two examples:

“My opinion is well known that in this generation a recognized man or organization which makes an eruv and knows that it will eventually become publicized – this is a dreadful stumbling block. For it is impossible that there won’t be one Shabbos when the eruv will be possul – and having become used to carrying on Shabbos all announcements and notices that the eruv is possul and that it is forbidden to carry will not help to stop people from carrying. An eruv should therefore only be made in secrecy.”

2. Another response was given in 5745/1985 to Rabbi Mordechai Zev Gutnick of Melbourne, who asked whether to build an eruv in Doncaster, Melbourne. The Rebbe’s response was copied and relayed by the secretary R’ Binyomin Klein a”h:

“To build an eruv – It is well known the complex discussions in this. And what is forcing him to enter into all of this?!”