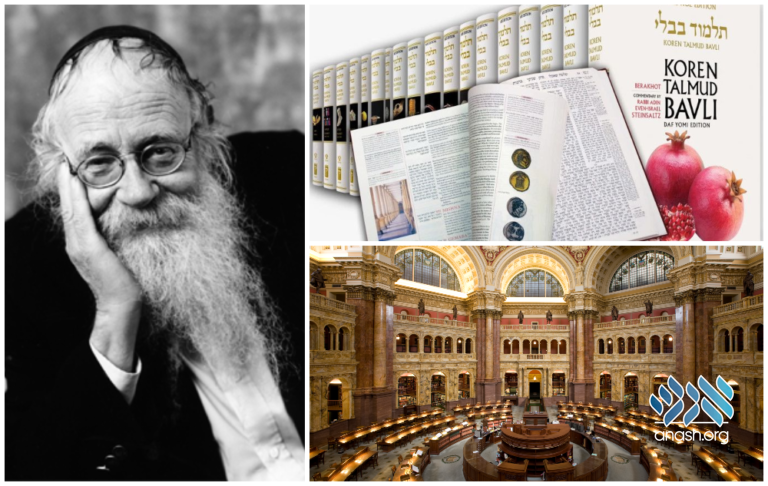 For the first time ever, a set of Gemara will be accepted into the US’s National Library of Congress, followed by the presentation of an award for Rabbi Adin Even-Israel Steinsaltz.

The Koren set of Talmud, with the translated commentary of world-renowned scholar Rabbi Adin Even-Israel Steinsaltz, will be released to the library in a celebratory event on Thursday.

The event, first of its kind, will feature Jewish elected officials Congressman Eliot Engel, member of the United States House of Representatives, and Carla Hayden, Principal Director of the Library of Congress.

Writing an explanation on Gemara became the center of Rabbi Steinsaltz’s life after he founded the Israel Institute for Talmudic publications in 1965, together with the Israeli government. Rabbi Steinsaltz’s life is devoted to education, the study of Gemara, and Chassidus. He has published over 60 books in many languages, and won the Israel Prize, as well as the President’s medal and the ‘Worthy Citizen of Jerusalem’ award.

“It’s a great honor for both Diaspora and Israeli Jews to receive such honor from a great institution as important as the US National Library of Congress. For all the Talmud’s thousands of years of existence, it is very exciting and meaningful for us, especially during times like these, when Judaism suffers from antisemitism,” announced Mani Even-Israel, the head of the Steinsaltz center.

The library is a research library that serves members, committees, the staff of the US congress and offers general lectures, concerts and exhibitions to the general public.