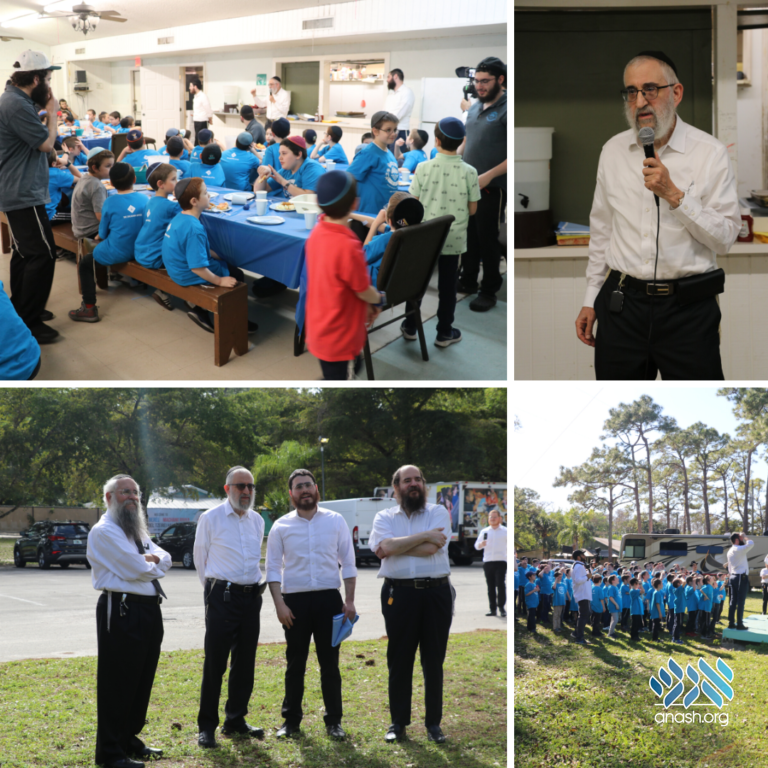 Rabbi Levy and his wife Malka toured the warm Florida campsite, getting a firsthand look at the annual haven for young Shluchim and watched how the children enjoyed each others’ company in such a rich Chassidishe environment. Rabbi Levy raised the camp flag and participated with Rabbi Shemtov in the official camp photo, and then joined the campers for a special lunch.

The campers were honored to hear some inspirational words from Rabbi Levy. He spoke about the unique qualities of his father and daughter, in whose names the camps are dedicated.

“They shared two very special common qualities,” he said. “On the one hand, they stood up for the truth and against injustice, even in situations that required immense mesiras nefesh. At the same time, they exuded true selfless kindness and ahavas yisroel, going out of their way to do a favor for somebody else.” With a focus on the ongoing boys division and in speaking to the boys of Machaneh Berel, he went on to share some very special stories of experiences and interactions his father was zoiche to have with the Rebbe.

Rabbi & Mrs. Levy are longtime supporters of the annual winter camp, a project for children of Shluchim by the Shluchim Office, which was recently dedicated in memory of Rabbi Levy’s father, Rabbi Berel Levy ob”m, and daughter, Rivka Levy ob”m.