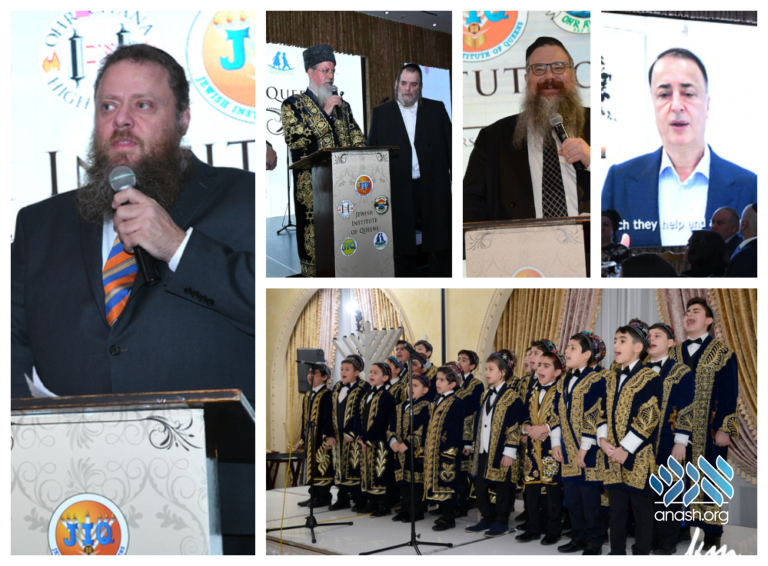 Prominent members of the Bukharian community participated in the annual dinner of the Ohr Avner educational empire, headed by shluchim and established by philanthropist Mr. Lev Leviev, who surprised those at the event with a generous pledge.

For the eighth year in a row, hundreds of community members, philanthropists and supporters, guests and friends, parents and teachers, gather to pay tribute to the educational empire directed by Rabbis Zalman Zvulonov, Yitzchak Wolowik and Shmuel Kogan; educational institutions which provide a wholesome and invested Jewish education from preschool through high school, founded with the vision of famed philanthropist Mr. Lev Leviev.

As the large crowd found their seats, they were entertained with Chanukah songs by the Atid Choir, made up of children of the community and the school, along with Chanukah prayers sung beautifully in the traditional Bukharian style by soloist Yitzchak Pinchasov.

Bukharian Chief Rabbi Baruch Babayov lit the Menorah and delivered a short Dvar Torah in honor of the holiday. Everyone washed their hands for Hamotzi, and Mr. Rachamim Nektalov was honored with breaking bread on the large, stately Challah on the head table.

Rabbi Asher Vaknin, the popular youth Rabbi of the community, was honored to read the Rebbe’s Kapital. An additional chapter, for the safety of Jews around the world in general and the Jews of Eretz Yisrael in particular, was recited by Rabbi Itzhak Yehoshua, head of the Bukharian Rabbinical Council of the United States and Canada. Rabbi Yehoshua also recited a memorial prayer for the souls of the prominent donors who passed away during the past year: Bukharian Jewish Congress Vice President Mr. Kohen Aminov, and Mr. Chaim Stern, a member of the congress as well.

At this point, Rabbi David Farkash assumed the position of Master of Ceremonies. In his opening words, he shares that he is too, a proud partner in these institutions. The evening is also accompanied by the Mezamrim Choir, directed by the talented Chilu Posen, along with the well-known Chassidic singer Mendy J.

The screens then projected the greetings of the founder and patron of the institutions, Mr. Lev Leviev, the one who foresaw the need for institutions to provide a traditional Jewish education to the thousands of children of the Bukharian community. At the close of his words, he surprises the participants with a pledge of one million dollars (!) for the expansion of the institutions in the coming year. Excited applause is sounded throughout the hall, and the MC encourages the donors at the dinner to join in and help achieve the three-million-dollar goal of the evening.

One after another, the honorees are called up to receive awards for their contributions to the community and to the educational institutions: Mr. Alex & Alla Yakubov were honored with the JIQ Elementary School Award, which they received from Mr. Boris & Nina Kandov, president of the Bukharian Jewish Congress of the US and Canada; Mr. Ronnie & Daniella Ben-Ishay received the JIQ Boys Middle & High School Award, from the BJCC President Mr. Eliyahu (Lion) & Esther Nektalov; veteran educator Rabbi Meir Lebowitz is presented with the Community Educator & Chesed Award as a representative of the educational staff, by world Bukharian Jewish Congress Vice President Mr. Gavriel & Chagit Sofiev, the daughter and son-in-law of Mr. Lev Leviev.

Alongside the awards, they also receive recognition from the local government representative, Assembly member Mr. David I. Weprin of 24th Assembly District who is well-known for his dedication to the educational institutions. Master of the mind Itzik Marco entertains the crowd with laughter and suspense in one, always receiving a resounding applause for his surprising conclusions.

The keynote address was presented by famed world-renowned author and lecturer Rabbi Shais Taub. The crowd sat glued to their seats, listening to his presentation of Chassidic stories and messages about the importance of a strong Jewish education, especially in light of the new challenges of the young generation.

The final part of the evening was perhaps the most touching of all. A video was shown on the screen, briefly telling the story of the success of the institutions, with graphs demonstrating the phenomenal growth. As the screens were dimmed, the spotlights returned to focus on the podium, where two students, representing the boys’ school and girls’ school, now stood. “It’s not just numbers,” they announced. “This is a real-life story!” They each shared how they were saved from an education in the public school system where they knew close to nothing about their Judaism, how they were introduced to Yiddishkeit in their new school and how their lives and the lives of their families have changed immeasurably. The straightforward and sincere presentation brought all the attendees out of their seats for an emotional standing ovation. Some tears were sighted as well.

A similar message emerged from a beautiful clip produced by Kaykov Media, following the day of five girls who had immigrated from the former Soviet Union during the great immigration, and had joined the institution. As the video concluded, they all alighted onto the podium, but with a different look. They are no longer students of the elementary school or high school. They are all happily married, wearing head coverings which serve as the best testimony that they have established wonderful Jewish homes. These representatives of the class of 2011 received special Ohr Chana Girls Middle & High School Award, along with the veteran high school principal Mrs. Sarah Aminov.

The hour is late, and the biting New York frost of Kislev hits you in the face, but inside the hall, a fire is aglow. The Shluchim, who dedicate their lives to the success of the institutions and to raising the next generation of Jewish children, break out into a lively dance, and the supporters and friends join in excitedly as well.