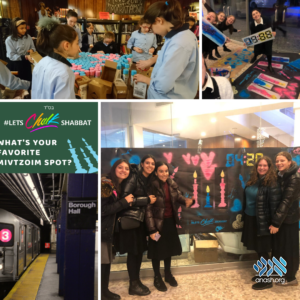 Just before Chai Elul, the Mivtzoim Depot of Lubavitch Youth Organization held a campaign where women and girls conquered the stations of the 3 train line. Girls chose their stop, picked up stencils, chalk, spray chalk and lots of neshek, and went on their way to brighten up their stop – and the entire world!

This Shabbos is The Shabbos Project. Their motto is “let’s keep it together” – one week where the entire Jewish world keeps Shabbos together. This week, not only are thousands of people keeping it together; some are also reaching out to others to join through the #let’schalkshabbat initiative.

Tuesday, an amazing group of Bais Rivkah girls went to the Mega Challah Bake in Atlantic City, where hundreds of teens joined together to make challah. The Bais Rivkah girls introduced the idea of mivtzoim to the teens as they entered, demonstrating how to ‘chalkshabbat’ and inspired them to join in.

Crown Heights this week will lead the world in sharing mitzvos with fellow women through ‘chalkingshabbat’ on both the 3 and 4 train lines.