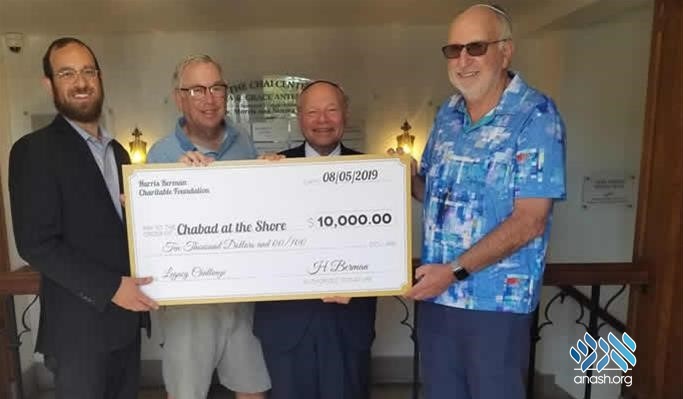 When Michael and Gail Frye met Chaya and Rabbi Alter Korf a dozen or so years ago, the couple had no idea that they would all become close friends and an important part of each other’s lives.

The Fryes already had a strong network of friends and community as residents of St. Petersburg, Fla., for more than 30 years when they met the Korfs, but soon the Fryes began increasing their contact with Chabad of St. Petersburg.

Today, Michael Frye can be found photographing various Chabad events or delivering meals for someone in need, and over the years, Gail has cooked the food served for Shabbat kiddush. “From the minute I met the Korfs, I felt like I was with family,” says Michael Frye. “They are wonderful, warm, loving people. Their kids even call my wife ‘Bubby Gail.’ ”

Among the offerings that the Korfs provide on a regular basis are an active Hebrew school, adult education programs, Shabbat services and holiday workshops. They also provide information for Jewish travelers visiting the area. Hoping to secure a strong financial future for the organization they love, the Fryes are taking part in the “Legacy Challenge” to encourage their peers to remember Chabad in their will.

“Chabad is unique in the Jewish community in that it doesn’t have a dues structure; nothing is mandatory,” says Michael Frye. “I know people are generous when the Chabad House needs something, but the legacy program is there to ensure that the vital programs and education can continue in the future for generations to come.”

The “Legacy Challenge” works like this: A generous supporter of Chabad pledges a one-time gift to the annual fund on the condition that 10 other donors sign letters of intent to bequeath funds to Chabad in their wills. So far, 108 people in 15 communities have pledged to leave such a gift in their will to their local Chabad House. Those numbers are expected to grow in the coming years as more Chabads join the nascent program, which is directed by the Planned Giving Department of Chabad Tomorrow.

In the last four years since Chabad Tomorrow was started, more than $70 million in gifts have been pledged to Chabad centers around the world.

Planting Seeds for the Future

“For community members who feel so welcomed and supported by their local Chabad Houses, the ultimate gesture of gratitude is ensuring that others will be able to benefit from that same experience,” says Rabbi Mendy Kotlarsky, executive director of Merkos 302, the parent organization of Chabad Tomorrow. “The supporters of the ‘Legacy Challenge’ are ensuring that future generations of Jews will always have a warm and welcoming home for Jewish learning and connection.”

Perhaps the most crucial component of the Chabad “Legacy Challenge” is the peer-to-peer encouragement needed to bring donors into the fold. That’s where people like Ronald Zukin come in. A native of Philadelphia who now lives in New Jersey with his wife, Barbara, Zukin encourages people to leave legacy gifts to Chabad at the Shore in South Jersey by personalizing the impact of Chabad on the giver.

“As Jews, we are always looking to plant seeds for the future and build a foundation that ensures our survival,” he explains. “The thing about Chabad—and this is certainly what I’ve witnessed firsthand at Chabad at the Shore—is that it’s something that works and works well. They are bringing our people back and finding so many different areas for everyone to enjoy Yiddishkeit.”

“When you invest in something, you always want a return on that investment,” he continues. “And the best way to get a bang for your buck is to support Chabad for the long term because they have demonstrated time and time again that they have a formula that works.”

He notes that this is not just a communal mission; it’s a personal one. His grandfather, Yaakov Yosef Elkin, was a Lubavitcher Chassid, and Zukin believes that he would be proud that his descendants are working to ensure a Jewish future for his grandchildren—and for everyone else’s grandchildren.

According to Rabbi Korf, having members of the community taking the lead in campaign “is a strong encouragement to others, and shows how much of an impact individual families who come to the table to make a legacy gift can have on the wider Jewish community.”

For Gail Frye, being a legacy giver was a no-brainer. “It’s a very worthwhile investment. You feel good about giving the money.”

“We have the enjoyment of being Jews, the enjoyment of our rabbi and rebbetzin, but I think the most important thing is that we support the Chabad Houses because the Lubavitcher Rebbe’s programs that started decades ago are still going strong … and they have to survive,” says Frye. “And they will only survive through a secure financial future.”