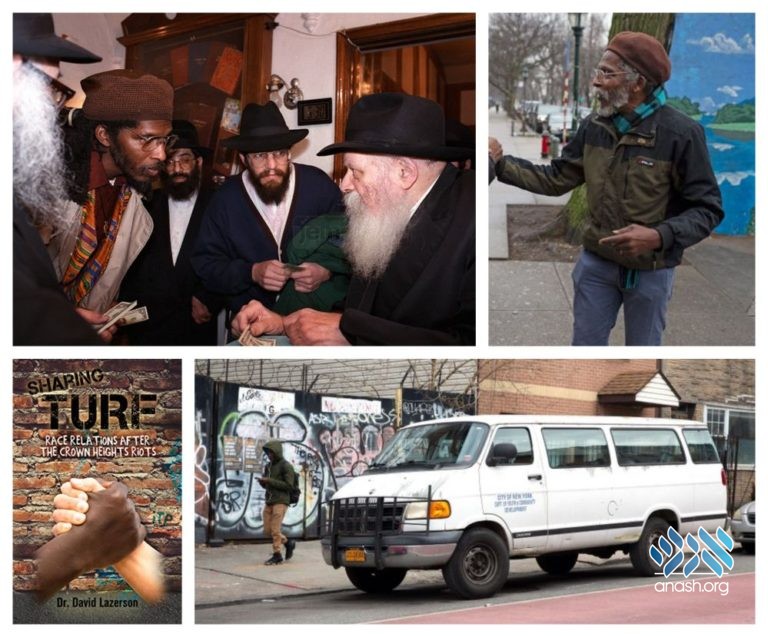 Having seen a significant spike in hate crime in 2019, Crown Heights activist Richard Green begins 2020 with a plea to the black community to step up.

If you pay attention while strolling the Crown Heights streets, you might notice a rundown white 2001 Dodge Ram driving by.

The van once belonged to a fleet of 21 outreach vans that were part of an initiative aimed at preventing violence in the neighborhood, including attacks on Lubavitchers living there. These ‘peace patrols’ didn’t involve security guards or armed citizens; instead, activists counseled teens on the streets, giving them a sense of belonging and someone to talk to.

Following the riots of 1991, the organization introduced the outreach vans, which focused mainly on neighborhoods from where the most calls to law enforcement originated. Unfortunately, government funding for the program no longer exists, something which is proving problematic for many reasons.

“They’d really all rather be doing something positive,” said Mr. Green. “They’d rather be in a gym, doing something recreational in a school building. But when there’s nothing for them to do…  We have young people with a serious need, and we have to do something to fill that need.”

Over the past couple of years, the city has experienced a significant increase of anti-semitic attacks. Many of these hate crimes involved black youths physically assaulting Jews in Crown Heights, or intimidating them by yelling anti-semitic slurs. For Mr. Green, who spent 40 years fostering positivity by teaching black kids about their Jewish neighbors, this has been an upsetting development.

“When these incidents started up again, I started to meet with folks from the ‘other side,'” Mr. Green told Anash.org. “I met with the young men from Shomrim and other groups in the community. One young man said he wanted to talk to some folks in my community, to ask them a simple question: he wants to know why they’re attacking, why are they doing these things to Jews?

“One of the things I learned about Crown Heights 30 years ago is that we need to stay in contact with each other. It’s important to express how we feel about this. And I see that a big part of what’s happening is due to a lack of education. We need to go back to peacekeeping. We’re seeing what happens when we don’t- it’s disintegrating.”

In 1991, tensions between the black and Jewish communities escalated, leading to three days of riots during which Yankel Rosenbaum was murdered and a number of Lubavitchers were injured. Following these tragic events, leaders in the two communities resolved to bridge the divide in an effort to stop the bloodshed.

The efforts began with a meeting between Mr. Green and chassidic activist David Lazerson, widely known as ‘Dr. Laz’.

“When I first met Richard, I came in with my beard and my kippah and the white strings, and he with his dreadlocks and his religious symbol around his neck- we were both looking very ethnic,” Dr. Laz told Anash.org. “But we spoke for an hour, and the only thing we disagreed on was that he’s a big time Jets fan, and I’m a big time Buffalo Bills fan. It was kind of funny.”

During their initial conversation, the two men discovered that they shared a common past; each of them had been involved in the hippie scene in their youth. They realized that it was vital that the young people in their respective communities come to understand that so many of their beliefs about the ‘other’ community were false.

In the following months, Project CURE was born. The two men gathered some yeshiva students and participants of the youth collective and moderated conversations where they could ask each other anything. The questions started off pretty basic.

“I was kind of amazed at how little we knew about each other,” said Dr. Laz, who wrote the book Sharing Turf based on his experiences during that time. “I always took it for granted that of course they know what these white strings are, of course they know why I’m wearing a Kippah. That’s like Judaism preschool! But guess what- they didn’t. And we didn’t know too much about them either.”

The group leaders felt hopeful when they realized that a lot of the mistrust was based on ignorance, which is easy to overcome with simple dialogue and education.

“We moved on, and soon all the stereotypes came out,” Dr. Laz recalled. “It was pretty intense. They wanted to know why we have this ‘holier than thou’ attitude, why we look down on them, why we control the police, the media, the banks; why are we all wealthy. They had lots of stereotypical ideas about us Jews, and particularly about us chassidim in Crown Heights.”

The yeshiva boys had questions based on assumptions of their own. ‘Why are you all gang members, why don’t you do anything productive with your lives, why do you kill each other over sneakers?’

“They had a chance to open up about that,” said Dr. Laz. “For the first time, they met Jews who had financial struggles, who had difficulties at home, and they realized that many of these stereotypes did not hold water.”

In 1992, Mr. Green joined a group of activists who went to 770 to meet the Rebbe and receive a dollar. As he walked by, the Rebbe blessed him to “be successful for the benefit of many.” The experience, which he refers to as a historic meeting, had a strong impact on him. To this day, he keeps a framed picture from this encounter in his home and at the office where he works.

Similar to what we’re seeing today, many of the politicians at the time were spouting cliches- well meaning, perhaps, but largely ineffective. In the beginning, people in both communities were dismissive of the Project CURE, assuming it would just be more ‘we’re all one family, there’s more that unites us than divides us’ type of rhetoric. However, the two forged ahead, and as the dialogue picked up, the irrational hatred that had previously led to violence began to dissipate.

Unfortunately, there is still so much ignorance out there. Granted, education and dialogue are unlikely to completely wipe out the epidemic, and the need for increased security and other safety measures are, of course, necessary. However, Mr. Green, Dr. Lazerson and the others who worked with them have seen the powerful effect these tools can have.

“It seems so simple, but it’s those simple things that make a difference,” Mr. Green said. “My mother used to say, nobody knows what you’re thinking. I used to think, what’s so profound about that? But as I get older I realize how true it is- people don’t know what the other is thinking, and we need to speak so we can understand one another.”

Amid the recent spate of hate crimes, including the bloodshed of innocent Jews that took place in New Jersey and Monsey, Mr. Green is urging leaders and citizens of the black community to step up and do something.

“When I saw Jersey City, that hurt me so much,” Green said. “It was just unbearable.