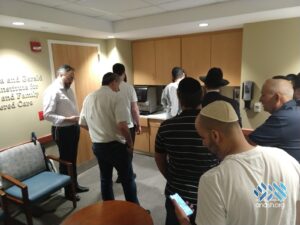 New Jersey shliach Rabbi Chanoch Kaplan of Franklin Lakes heard about a young Satmar chossid who was hurt in an accident on Route 208 this evening. He was transported to Hackensack University Hospital and Rabbi Kaplan went along with him. To add to his pain the victim is in the year of aveilus after his mother and had yet to daven maariv and said kaddish. He hadn’t missed a minyan for his mother in the six months since he began. It was late at night, what was he to do?

At 10:45 pm Rabbi Kaplan got in touch with Rabbi Mendy Kaminker of Hackensack, and in a matter of minutes, due to the quick work by Rabbis Kaplan and Kaminker, a minyan joined and the young man davened for the amud and said kaddish.