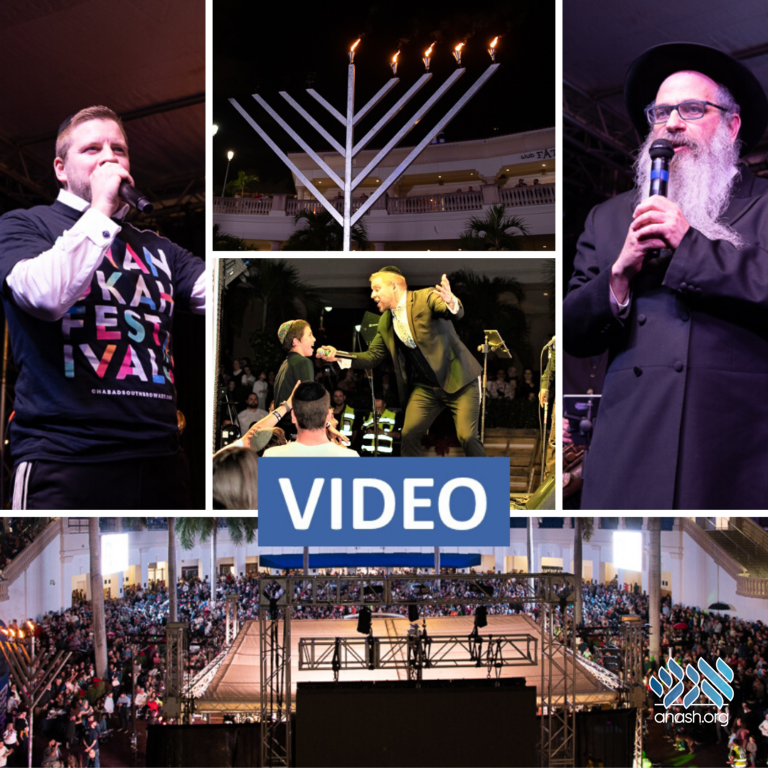 This year’s South Florida Chanukah Festival featuring singer Mordechai Shapiro, was the largest yet in its forty year history.

The 40th Annual South Florida Chassidic Chanukah Festival, the World’s Largest Annual Chanukah Festival, which is one of the biggest Kiruv – outreach programs in the world, was held Wednesday, December 25, the fourth night of Chanukah.

The Festival was held at Gulfstream Park and Casino in Hallandale Beach. The Festival featured the hottest Jewish music superstar, Mordechai Shapiro, who sang, danced and jumped for two hours non stop!

Rabbi Raphael Tennenhaus, Chabad’s Executive Vice President, maintained the 40 year tradition, that admission to the Festival was FREE! Ever since the Festival moved to Gulfstream in 2007, crowds of 10,000 people and more have participated in the South Florida Chanukah Festival. This year, police and security teams estimated the amount of Festival Participants on three levels of Gulfstream as the largest ever in history!

In the past forty years, hundreds of individuals and families have become Shomer Shabbat, have sent their children to Jewish Day Schools, and have made Aliyah to Israel, thanks to their souls being ignited to Judaism FOR THE VERY FIRST TIME, at the annual Chanukah Festival. Approximately 200,000 people have attended the South Florida Annual Chanukah Festival since 1980. Chabad of South Broward Headquarters holds the distinction of hosting and sponsoring the World’s Largest Annual Chanukah Festival.

Rabbi Moshe Schwartz, Chabad’s Administrator since 1988, was actually inspired by a large public Menorah, back in the 1970’s, that brought him completely “back” to Torah and Mitzvos. “The impact of our Annual Chanukah Festival, is endless. We once had a father of a three month old boy call us, the day after our Chanukah Festival, and said that he wasn’t traditional and didn’t arrange a Bris Milah (circumcision) for his son. After attending our Chanukah Festival, this man was so inspired and proud to be a Jew, he had us arrange a Bris for his baby”, Rabbi Schwartz remarked.

Tens of thousands of different people, from all walks of life, have participated at these Mega Chanukah Festivals, broadcast live around the world via Chabad.org.

Due to the large crowds who attended in the early 1980’s, the idea to reach an even larger crowd at a sports venue was then initiated by Chabad of South Broward. This materialized at a Miami Dolphins Football game back in 1987, with over 75,000 people in attendance. This trailblazing event has been continued many times over, bringing the Chanukah Menorah and message of Freedom to millions of people around the world, at football, basketball, hockey and soccer games. When you think of Global Chanukah Outreach, you think of Chabad of South Broward Headquarters.

Scores of community dignitaries and leaders were present, including Mayor Joy Adams of Hallandale Beach, Commissioner Michele Lazerow and high ranking officials of the Local Police Departments. Mayor Josh Levy of Hollywood issued a Proclamation of “118 Days to Increase in Acts of Goodness and Kindness to hasten the Revelation of MOSHIACH”.

3,500 Beautiful Festival Souvenir Gift Bags with real Chanukah Gelt (one dollar) chocolate Gelt, dreidel candies and the MOSHIACH Times were distributed to the thousands of children in attendance by students of the Chaya Aydel Seminary.

A special thank you to all the Sponsors and Donors of the 40th Annual Chanukah Festival.

Work on this Chanukah Festival, on a daily basis, began eight months ago in May. All the Shluchim at Chabad of South Broward Headquarters assisted in planning this Mega Event, including Rabbi Moshe Schwartz, Rabbi Levi Tennenhaus, Rabbi Mordy Feiner, Rabbi Yossi Lebovics and Rabbi Mendy Tennenhaus.

Rabbi Tennenhaus concluded,” Our Annual Chanukah Festival, like the olive oil found in the Holy Temple in the story of Chanukah, is pure! It’s three uniteruppted hours of pure Chanukah joy and Pirsumei Nissa – publicizing of the miracle of Chanukah.

Thanks to our generous sponsors, the 40th Annual Chanukah Festival on December 25th, was our biggest and most successful in our 40 year history.”