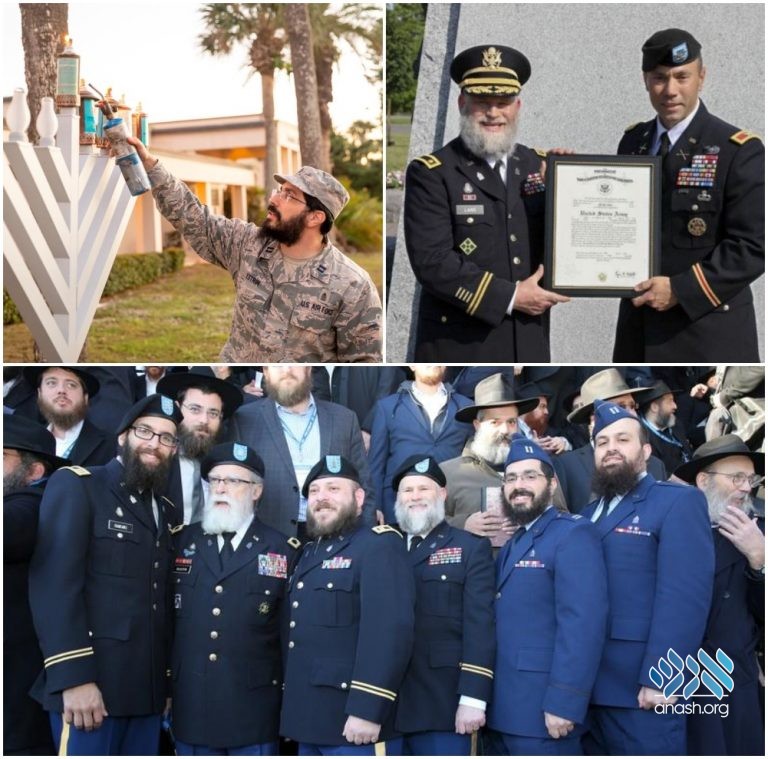 Did you know: Every one of the Rebbeim from the Tzemach Tzedek onward made significant amounts of effort to help Jewish soldiers? In fact, the Tzemach Tzedek had an open door policy for any soldier – if a Jew came dressed in military uniform, they were permitted to walk straight into his office, no questions asked! The Rebbe Rashab was extremely concerned with sending matzos for Pesach and arranging kosher food for soldiers. The Frierdiker Rebbe wrote a famous letter and booklet with special Tefillos to be distributed to every Jew in the Armed Forces. And our Rebbe convinced several rabbis to become military chaplains, and was involved in several fascinating cases involving Jews in the US military.

The Aleph Institute is proud to present you with a unique Shlichus opportunity: The US military is looking for Jewish chaplains for Active Duty! (“Active Duty” refers to full time military enlistment; “Reserves” or “National Guard” are typically part-time involvement.) Join the military for a 4 year contract Active Duty. Under our auspices, you will be considered a Shliach under Merkos through the Aleph Institute as long as you remain in Active Duty. After your contract is up, you will have the opportunity to continue your career as Active Duty or as a Reservist, or conclude it. The choice remains yours and your family’s.

Here you can learn anything you need to know to consider becoming a chaplain in the US Armed Forces:

A Bachelor’s Degree of 120 university credits

72 credits towards a Master’s Degree (which can be your Semciha, if the Semicha comes from an accredited institution)

A minimum of 2 years of Rabbinic experience. Depending on the length of your rabbinic experience, you will enter as a commissioned officer, with the rank of either a First Lieutenant or a Captain.

You must be physically fit. Google “military fitness requirements” for your age group to see the exact standards.

You must have good interpersonal skills, be able to operate in a non-Jewish environment, and have a strong and stable sense of Yiddishkeit.

For Active Duty military Shlichus, one must be married. Singles may apply for the Reserves.

A military chaplain has several responsibilities:

Religious Accommodation: He provides for the religious needs of all under his care. While specifically being responsible for the Jews and the Jewish programs on his base, he also works with chaplains of other faiths to ensure everyone has their needs met. (The chaplains all work under the commander’s auspices, as the ultimate responsibility for the religious program is the commander’s.) At no time would you be required to conduct a religious service for a non-Jewish faith group.

Morale: The chaplain is an officer whose responsibility is to spend time with his troops and assess their needs. He must be capable of counseling and uplifting people in any situation.

Advising Commanders: A chaplain serves as an advisor to the commander on religion, morale and ethics. He must be able to give commanders sensible advice, so the commanders can make the best decisions possible in whatever circumstance they find themselves – whether that refers to wartime decisions or personnel decisions. The chaplain himself has no command authority.

A chaplain is a non-combatant – he does not carry or discharge weapons. (In a war zone, he is accompanied by Religious Affairs personnel, who is a combatant and serves as his bodyguard.)

Each of the branches of the military (Army, Air Force and Navy; the Marines and Coast Guard use Navy Chaplains) have their own style and operations; and that includes how they deploy and use chaplains. However, they also share much in common. You will be given the opportunity to live on base with your family, and receive a competitive salary that increases with your years in service and promotions in rank, along with excellent benefits – including healthcare for you and your family and life insurance. You’ll be given the opportunity to serve in a host of worldwide assignments. Become part of a family of dedicated chaplains, including several outstanding Lubavitcher Chassidim, as we serve our country while representing the Rebbe and Yiddishkeit to Jews in uniform, making a Kiddush Shem Shamayim!

For more information, call Rabbi (Chaplain, Captain) Elie Estrin at 206-267-8764, or email him at ee@aleph-institute.org.