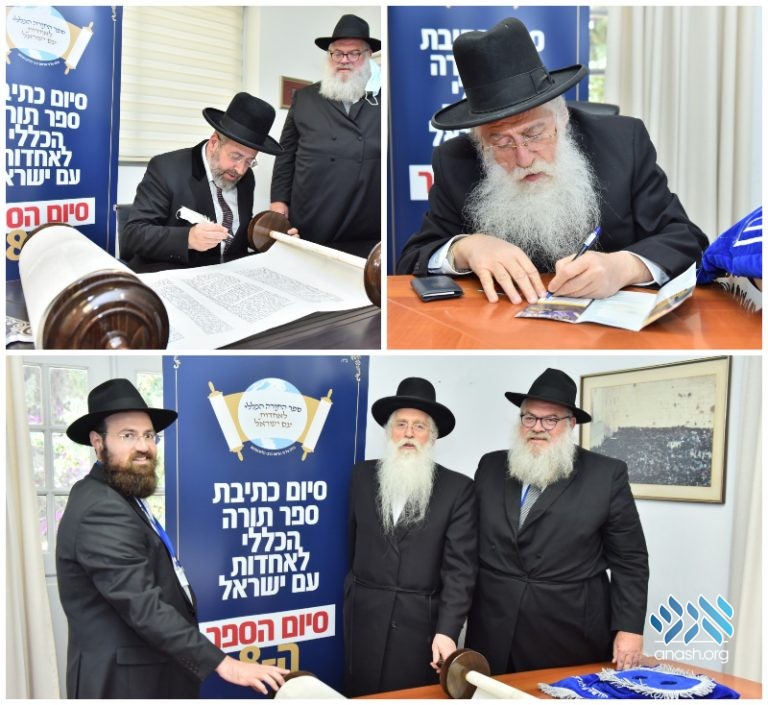 Members of the Israeli Knesset and the Chief Rabbi of Israel filled in the last letters of the 8th Unity Sefer Torah, a project requested and encouraged by the Rebbe.

In 5742 [1982] the Rebbe asked that Sefer Torahs should be written for Klal Yisroel. This week, the eighth such Sefer Torah was completed. Knesset Members and the Chief Rabbi of Israel were honored with writing the last letters.

Over the past 38 years, seven unity Sifrei Torah were completed and over two million Yidden participated by purchasing a letter. In the recent months, the project took on a new urgency, recalling the Rebbe’s words that one who had a letter in these Sifrei Torah would be saved from harm.

“Even as the last letters are being written, there remains 2,713 letters left to be purchased,” they said. “We encourage everyone to get a letter today for yourself, your family and friends, and to spread the word.”

This Torah is for Jews of all ages. (Letters may also be bought in memory of a relative who has passed.)

Visit: www.Unityletter.com to acquire your letters and for more information. As all proceeds go directly to Tzedaka, you decide the price!

Additionally, for children under Bar/Bas Mitzvah, it is imperative that they acquire a letter in the Children’s Sefer Torahs. (see Kidstorah.org)

For more information, and to receive beautiful educational resources to pass along, reach out to: letterunity@gmail.com.