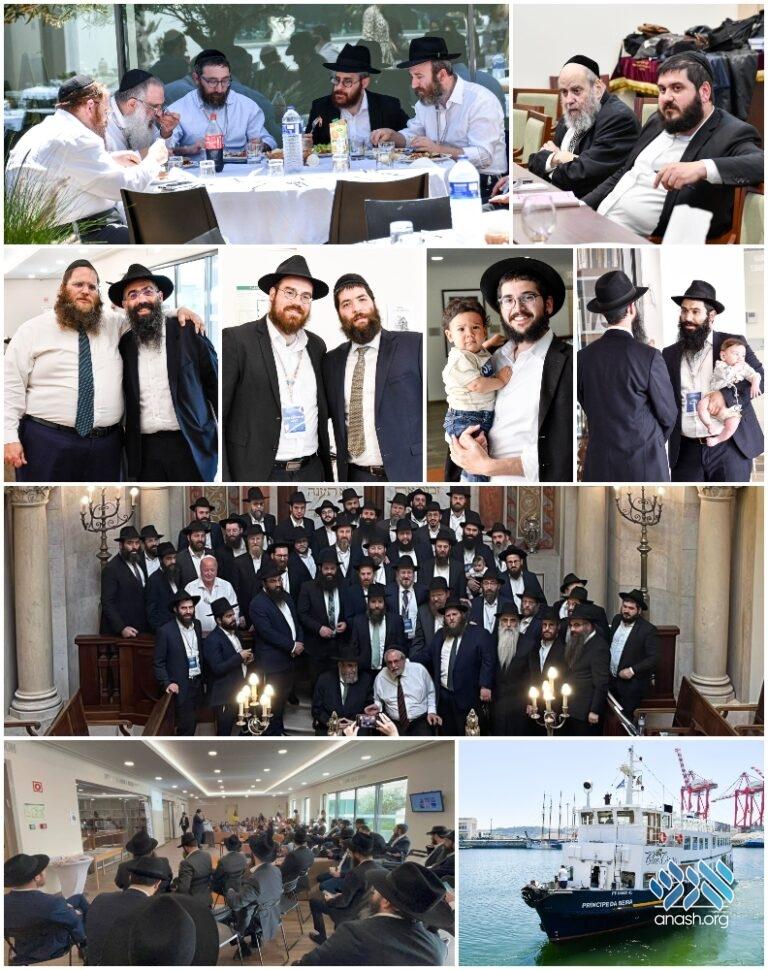 A regional Kinus is taking place this week in Lisbon – Cascais, Portugal for Shluchim and Shluchos serving smaller Jewish communities in countries across Europe and Africa. They were joined by Lisbon Mayor Carlos Moedas.

A regional Kinus for Shluchim throughout Europe and Africa is taking place this week in the historical Lisbon – Cascais, Portugal. The Kinus is a gathering of a network of Shluchim serving in locations with smaller Jewish communities and tourist destinations.

A unique part of the program occurred at Rocha da Conde de Óbidos, the same Pier from which the Rebbe and Rebbetzin departed war-torn Europe for America.

The Shluchim boarded a boat from the pier, where they were joined by Carlos Moedas, The Mayor of Lisbon, for a waterside lunch and moving speeches by dignitaries and fellow Shluchim.

The Mayor of Lisbon expressed his pride in leading the city that played such a pivotal role in the Rebbe’s escape and the eventual growth of Chabad into the international movement it is today.

“May you continue being successful in all your endeavors,” Rabbi Moshe Kotlarsky, Vice Chairman of Merkos L’Inyonei Chinuch, blessed the mayor. “Your friendship and support have been essential to the blossoming of Jewish life in a place where we once faced much persecution.”

Also on the boat, a Shiur was given to the Shluchim by Rabbi Chaim Greisman of Stockholm, Sweden, on the Reshima which the Rebbe wrote while in Lisbon in the Spring of 1941. The Reshima was written just a day before the Rebbe and Rebbetzin boarded the Serpa Pinto and sailed for America.

The three-day gathering of Shluchim and their families is being hosted at the brand new Avner Cohen Casa Chabad by the local Shluchim, Rabbi Eli and Raizel Rosenfeld and Rabbi Haim and Hannah Chettrit of Rohr Chabad Portugal.

The Shluchim were joined by dignitaries such as Carlos Moedas the Mayor of Lisbon, Carlos Carreiras, the Mayor of Cascais, Jefferey Levine, the husband of the United States Ambassador to Portugal Randi Levine, as well as Dor Shapira, the Israeli ambassador to Portugal, who shared a thought from the Parsha, highlighting the idea of all Jews being true brothers. Rabbi Ruben Suiza, the local rabbi, welcomed the Shluchim to the historical Lisbon Synagogue.

Shluchim joined from over thirty countries where they serve smaller Jewish communities and exotic tourist destinations in Europe and Africa. Their special Shlichus leaves them largely isolated from broader Jewish communities; many are the only Shluchim within thousands of miles. This year they are returning to the Kinus after a three-year hiatus due to Covid. It is a long-awaited opportunity to recharge and inspire one another.

Participating Shluchim hailed from countries including: