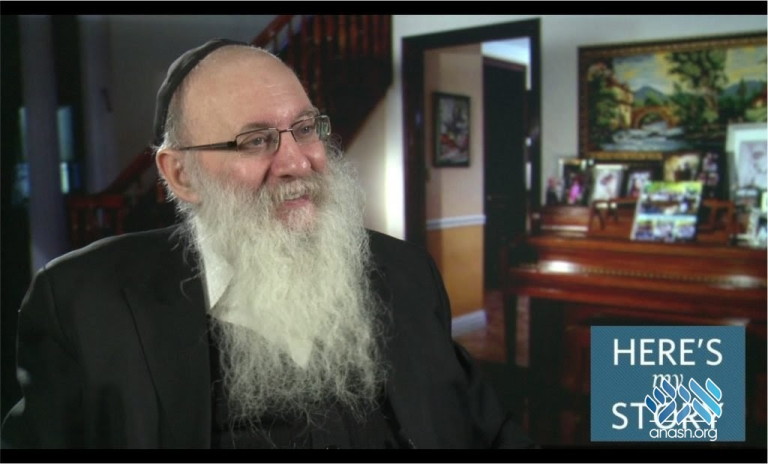 Read this week’s “Here’s My Story,” from JEM.

My ancestors were Ger chasidim from Poland, but my father did a favor for the Previous Rebbe of Lubavitch back in Europe and later, once they both immigrated to America, developed a relationship with him. As a result, my brothers and I were sent to Chabad schools, and we became Lubavitchers.

I was nine years old when I first saw the Rebbe up close. It was just before Yom Kippur, and he was giving out lekach, honey cake, as was his custom. I stood in line and got mine, but as I started walking away, the Rebbe called me back and handed me an extra piece. He said, “Your brothers were here, but they forgot to get cake for your father.” I was astonished – how did the Rebbe know who I was, who my father was, who my brothers were? How did he notice, with so many people waiting in line, that none of us asked for a piece of cake for our father, probably assuming that the other brother had done so?

In fact, this is exactly what happened, and when I got home my brothers were there arguing with each other because of this misunderstanding. However, it all turned out well because the Rebbe was paying attention and anticipating that my father would miss his piece of lekach. This is how deeply and personally he was connected to each of his chasidim.

That was my first encounter with the Rebbe which took place in 1956 when I was nine years old. Four years later, I had my first personal audience – on the occasion of my Bar Mitzvah. At the time, I was struggling to learn the maamar, the Chasidic discourse, as is the custom. My father was very ill then and I had no one to teach me, so I was having a difficult time with it.

When I came into the Rebbe’s office with my mother, the Rebbe asked me, “Have you started learning your maamar yet?”

“Recite some of it,” the Rebbe said.

I only really knew the first sentence, so I recited it: “It is written in the Midrash Tehillim…”

No sooner had I pronounced the word “Tehillim” than the Rebbe exclaimed, “That’s good.” He sensed that from this point on I could not do it and would be deeply embarrassed. So he complimented me immediately in order to encourage me. And then he told me that I should make a habit of reciting daily the Psalm which corresponds to my age.

Later on, I attended the Chabad yeshivah in Montreal and, when I was twenty-two, I got married. I very much wanted to go out into the world as the Rebbe’s emissary, and was lucky enough to marry a young woman – Leah Mindle – who wanted to do the same.

There were seven potential locations that would accept us, and we presented this list to the Rebbe. He crossed out five and said that of the remaining two – Boston and Detroit – we should go wherever my wife preferred. She chose Detroit and that is where we went – settling in Ann Arbor, which is the home of the University of Michigan with an enrollment of six thousand Jewish students. We established a Chabad House there with the Rebbe’s blessing

After a time, we moved on to another location in Michigan and younger emissaries came in to take over what we had started.

In 1976, we were living in Oak Park, where I was running the Chabad Center, but I was travelling a lot to Ann Arbor to help the new emissary get settled in. My wife was pregnant at the time.

One day, as I was driving with her in the car right past the Chabad Center in Oak Park, a drunk driver ran a red light at seventy miles an hour and smashed right into us. Obviously, the car was totaled and my wife went into labor from the shock of it. We informed the Rebbe’s office and received the Rebbe’s blessing for her right away. Fortunately, the contractions subsided and the pregnancy continued, although my wife suffered some bruises.

A month later, we were getting ready to go to New York to spend Passover with my mother, but my wife was very nervous that the baby might have been injured in the crash and she wanted another blessing from the Rebbe before we would travel. But I would not bother the Rebbe again. Just a short while earlier we had received his blessing, so there was no need for another one as far as I was concerned. This did not allay my wife’s fears, however.

I recall that we were about to leave for the airport when the phone rang. It was Rabbi Binyomin Klein, one of the Rebbe’s secretaries, calling completely out of the blue to tell my wife that the Rebbe wanted to reassure her that the baby would be fine.

The Rebbe sensed that my wife needed that reassurance. I wasn’t being a good husband by getting it for her. I didn’t want to bother the Rebbe. So on his own initiative, the Rebbe had Rabbi Klein call and tell her all would be well.

And it was. The baby was born normally in New York shortly before Passover. She grew up happy and healthy, and today is serving as the Rebbe’s emissary in Needham, Massachusetts.

Subsequently, we ended up serving as the Rebbe’s emissaries in Birmingham, Alabama. Although we accomplished a lot during the seven years we were there, the first year – 1982 – was very rough. And the years that followed were not much better. There were members of the community who were very unwelcoming to us and they made things difficult. So I wrote to the Rebbe often about these problems but I never received a response. I started to think that I must have done something wrong, and the Rebbe cut me off. I was thinking this just as I drove up to the house. Suddenly, my eight-year-old daughter – the same one who was born after the accident – comes running out, “You just missed a call from Rabbi Kotlarsky.”

Now, Rabbi Moshe Kotlarsky, from the office of Merkos L’Inyonei Chinuch in New York, never called me, so this was a big deal. I called back.

“How are things going?” he asked me.

“The word terrible doesn’t even begin to describe it,” I answered.

“Well, I will convey that to the Rebbe’s secretariat,” he said and was about to hang up when I asked him, “But why did you call me?”

He then explained that all he knew was that Rabbi Mordechai Hodakov, the Rebbe’s secretary, asked him to make the call and to say, “Tell Lipszyc in Alabama that we are thinking of him.”

This was clearly a message from the Rebbe that he sensed my concerns and that I was still connected. I needn’t have worried.

Rabbi Yitzchok Meyer Lipszyc has served as the Rebbe’s emissary in Michigan, Alabama, Florida and Crimea. He is presently working at Yeshiva Temimei Darech in Tzfat. He was interviewed in March of 2015 in the My Encounter studio in Brooklyn.

This week’s Here’s My Story is generously sponsored:
In loving memory of our dear parents
Yehuda ben Yosef
Sara Etl bat Moshe
By their children